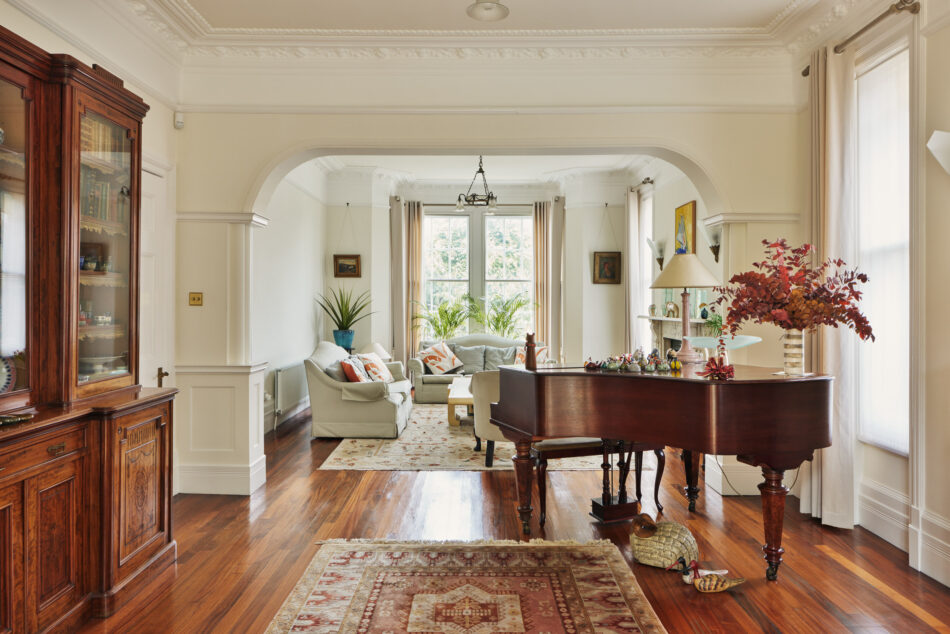 The dining room is located in an unique Ivy-covered extension, with pointed arched windows which frame views of the garden

This wonderful six-bedroom semi-detached house sits raised above street level with fantastic views across North London, to Muswell Hill and beyond. The Victorian house extends over 3,200 sq ft and was renovated and extended by the current owners. They created an additional light-filled dining space which overlooks a south-east facing garden. The handsome building is in a brilliant position, close to a myriad of expansive green spaces and bustling Crouch End.

Built in c1886, this semi-detached Victorian house is on a pretty street full of red-brick homes. The current owners made the house their home in 1976; it was very run down at the time, but they fell in love with the grand staircase and beautiful large windows on every floor. Since then, they have spent years bringing the house back to its former glory.

Originally built to provide a splendid house near the city, the front of the building would have looked out over a valley and a river, as well as the hill that rose up where Alexandra Palace sits. It is still possible to see the palace from the top of the house, as well as its annual fireworks display. The house is a short walk from Crouch End, which is full of independent shops, restaurants, pubs and two arts cinemas. Indeed, writer Sir John Betjeman once described it as having the appearance of a ‘seaside town centre’. For more information, please see the History section.

Entry is through a gate on the road level and up steps that cut through the front garden, to the raised front portico of the house. From here, the front door opens into a wide hallway with a grand Victorian staircase rising to the full height of the house, creating an incredible sense of volume.

A voluminous sitting room spans the length of the house. The quality of light here is exceptional, with two large sash windows at the front, glazed French doors that open onto the garden at the rear, and additional tall windows that run along the eastern wall. Once two rooms, they were opened up by the current owners in order to make the most of the grand proportions. An open fire warms the room in the winter, and mahogany floorboards are found underfoot.

Beyond, to the rear of the house, is the kitchen, composed of clean-lined, grey cabinetry and French farmhouse tiled floors. The dining room is located in a unique Ivy-covered extension, with pointed arched windows which frame views of the garden. A wall of open arches, which mirror the shape of the windows, helps to divide the kitchen from the dining room while preserving the sightlines across the downstairs. A glazed door opens onto the garden. There is also a cellar which is home to a useful utility room.

Upstairs are two large bedrooms; one is Japanese themed with beautiful wallpaper. The principal bedroom has three generous windows which bathe the room in light, a luxurious en suite bathroom with a freestanding bath in the middle and natural smoothed stone walls. There is another fantastic bathroom on this floor, with blue and white tiles and a sunken bath.

On the top floor are four further bedrooms, two of which are currently being used as studies, and all of which share spectacular views over London.

The garden is a lovely space, with a paved seating area closest to the house and stone steps leading to a lawn at the rear. There’s also a Walnut tree planted by a squirrel a number of years ago, as well as clematis and numerous other mature shrubs and flowering plants. South-east facing in orientation, the garden enjoys the sun for most of the day.

Crouch End is within easy reach with its excellent selection of cafes, restaurants, pubs and cinemas. Restaurants include an array of independent ones; French eatery Bistro Aix, Japanese restaurant Tootoomoo and Lyon’s, which serves delicious seafood, to name a few. In terms of pubs, Maynard Arms is a fashionable gastropub; the Queens is found in an incredible Victorian building and is full of original features, while The Kings Head serves craft beer and has a comedy club downstairs. There is also a range of health food, fruit & veg shops, fishmongers, and numerous bakeries.

The area feels remarkably rural, backing onto Queens Wood and Highgate Wood; ancient woodland comprising numerous conservation areas, preserving trees such as oak, hornbeam and beech. Also within walking distance are more parks and tennis and cricket clubs, including Coolhurst Tennis & Squash Club, North Middlesex Cricket Club and the Highgate Cricket and Lawn Tennis Club. Parkland Walk is a much-loved trail on a disused railway line that connects Finsbury Park to Highgate. To the west is Waterlow Park and Hampstead Heath, and beyond Crouch End, to the north is Alexandra Palace, as well as the aforementioned woods.

There is also a great selection of good local schools; including St Michael’s Primary and Coleridge Primary, as well as Highgate School for Boys and Girls and Channing School for Girls, which starts from primary school age.

The house is close to Highgate Station (Northern Line) , as well as Crouch Hill (London Overground), and is a short bus ride from Finsbury Park tube station (Victoria and Piccadilly line). There are also various other bus routes connecting Crouch End to the west end and central London.

Crouch End has many notable residents. In 1845 gin distiller John Gillyat Booth lived in Crouch Hall (one of the largest estates, it comprised nearly 10 acres and had a lake parallel to the road that covered over two acres).

Artist and teacher Charles Swinstead lived in Crouch End and established The Hornsey School of Art 1880. The school became an iconic British art institution, renowned for its experimental and progressive approach to art and design education.

Since then, the area has been something of a creative hub. In the early 1980s, part of the old church on Crouch Hill was converted for use as a studio by Bob Bura and John John Hardwick, the animators who worked on Camberwick Green, Captain Pugwash and Trumpton. It was named The Church Studios, and in the 1990s, Dave Stewart and Annie Lennox of the Eurythmics rented the space. In the 1990s, Bob Dylan worked on an album in the studio and became so fond of the area he looked for a property in Crouch End. He was a regular at the now-closed Shamrat Indian restaurant.

Crouch End is also the home of the symphonic choir, Crouch End Festival Chorus. The choir has worked with many classical and popular musicians, including Ennio Morricone, Noel Gallagher, Andrea Bocelli and Katherine Jenkins.