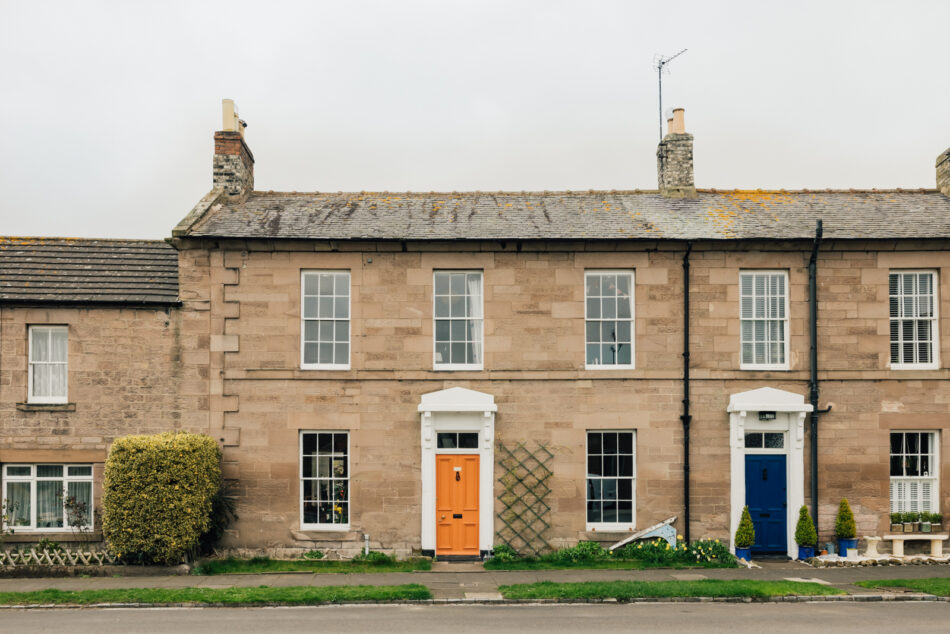 This beautiful Georgian Grade-II listed house is in the middle of the bucolic village of Norham, a stone’s throw from Berwick-upon-Tweed and the coast. Built in the early 1800s, it is believed to have originally been the village doctor’s home (with his surgery in the neighbouring house). Extending to almost 1,500 sq ft and including three generous bedrooms, West View has been carefully restored and extended by the current owners, who impressively did much of the work themselves.

Norham is an ancient village that is still based around its medieval layout. Arranged around a triangular central green, it is remarkably quiet thanks to the lack of cars driving through. It is famous for its eponymous 900-year-old castle, which has been immortalised by JMW Turner in a series of paintings, as well as in Sir Walter Scott’s famous poem ‘Marmion: A Tale of Flodden Field’. The castle originally defended the nearby River Tweed from the Scots, but once England and Scotland were unified it was allowed to decay; it remains as a symbol of the peace that was eventually achieved. The villagers were encouraged to use its stone to build their houses, and West View was constructed from the castle’s stone.

West View’s orientation is due exactly west – hence the name – and as a result enjoys lovely sunsets over the 12th-century church and village memorial, regarded as one of the prime spots in the village. The current owners have thoughtfully renovated it over the years, bringing it back to its original glory, and have preserved many original details such as the slightly uneven, characterful staircase, internal doors, many of the floorboards and the original windows. They also had plaster coving made to match original pieces that remained on some of the ceilings and installed traditional coving and ceiling roses in all the main rooms. The extension is a striking addition, clad in black clapboard and punctuated with cream sash windows.

The façade of West View is beautifully balanced, with tall sash windows on either side of the orange front door. This is framed by a two-pane overlight and crowned by a stone surround, complete with a cornice hood on brackets. The current owners stripped back the ironmongery on the door, revealing the old nameplate, a knocker and a letterbox. A large formal hallway and a secondary glazed door welcome you inside the house, where patterned encaustic tiles line the floor and there is space for hanging coats.

To the left is the new open-plan kitchen and dining room, bathed in light through an original sash window. This now has laminated thin glass for insulation but is still framed by its original shutters and panelling, with some fragments of the original wallpaper left behind. The kitchen has bespoke, dark blue-painted cabinetry with stainless-steel countertops and a white brick-tile splashback. Handmade terracotta tiles line the floor. To one side is a generous pantry, which has been panelled so it remains slightly cooler than the rest of the house. To the other is a scullery with a wide butler sink and open shelves. This leads into the extension; a wonderfully bright room with glazing on the sloped roof and floor-to-ceiling bi-fold doors opening onto the yard. This is currently used as a study, but could easily be a morning or breakfast room since it receives the sunrise, or a larger dining area.

At the front of the house is a formal sitting room, where new engineered-oak floorboards run underfoot. This room is arranged around its original fireplace, with an ornate surround flanked by two decorative columns, and has plenty of built-in storage and a stretch of bookshelves. On this floor, there is also a large guest WC which doubles as a utility and laundry room.

Upstairs on the first floor are three bedrooms with large sash windows that run along the front of the house. The main bedroom is a generous double room, with an en suite bathroom overlooking the surrounding gardens. In the second bedroom, additional storage has been created by repurposing the door which once united this house with its neighbouring surgery, and which features a signature from a local carpenter dated 1910.

There is another family bathroom on the top floor of the extension. This room is slightly bigger than the room underneath, creating an external overhang and a useful place to store firewood below. This is a luxurious space decorated with ply cabinetry, hexagonal floor tiles and rich, green tiles lining the walls. The attic above is insulated and partly boarded; planning permission has been given for an extra window to be installed in the roof.

The private yard to the rear of West View is a fantastic space, with charming views over other back gardens and to the castle beyond. Original bricks have been repurposed to create a raised bed, and black fencing has been added to match the cladding of the extension.

Norham itself is a very pretty village, surrounded by rolling countryside and close to numerous walks along the River Tweed and beyond. There is a beautiful stretch of coastline less than 15 minutes drive from the house, with nearby beaches including Fisherman’s Haven Beach, Cocklawburn Beach, and – of course – the beachfront and lighthouse at Berwick-upon-Tweed itself.

West View is in a fantastic position. It enjoys all the benefits of a small, rural village, but is just a short drive from Berwick-upon-Tweed, which in turn is only 45 minutes by train to the centre of both Edinburgh and Newcastle upon Tyne. There is a wonderful community in Norham and a renowned butcher (which sells delicious pies, along with wine and local cheese), bakers, gunmakers (which mostly supplies fishing and sports items), a village shop, and two pubs, one of which is also a guest house. Norham is known for its salmon fishing, and you can watch salmon jumping along the river in the summer. There are many community events throughout the year as well as longstanding unique traditions: a living nativity, a village pantomime, a community picnic and more. There is even a Pétanque club on the village green.

Nearby, The Cross Inn in Paxton serves great food, and there are numerous other eateries such as The Mule on Rouge and The Barrels Ale pub in Berwick, alongside microbrewery The Curfew and coffee roasters Northern Edge. There is also Audela restaurant, the wine bar Atelier, and Indian restaurant Amrans. There is a plethora of independent bookstores and antique shops along Bridge Street, with live music at The Barrels too, and a Theatre and Arts centre called The Maltings.

The village has a First school, St Ceolwulfs Church of England, which is OFSTED-rated “outstanding”. Both a middle school and a high school are found in Berwick, with a school bus which goes between the village green and the school. A local independent day and boarding school, Longridge Towers, is a couple of miles outside Norham.

The larger area of Berwick-upon-Tweed is known for its artistic traditions, with an array of resident artists and illustrators. This is due in part to its beauty, its proximity to Edinburgh and its good light. It is bordered by ruined Elizabethan walls and is known for its three iconic bridges that cross the River Tweed.

Please note that all areas, measurements and distances given in these particulars are approximate and rounded. The text, photographs and floor plans are for general guidance only. Inigo has not tested any services, appliances or specific fittings — prospective purchasers are advised to inspect the property themselves. All fixtures, fittings and furniture not specifically itemised within these particulars are deemed removable by the vendor.
West View — Norham, Northumberland
Interested? Let’s talk