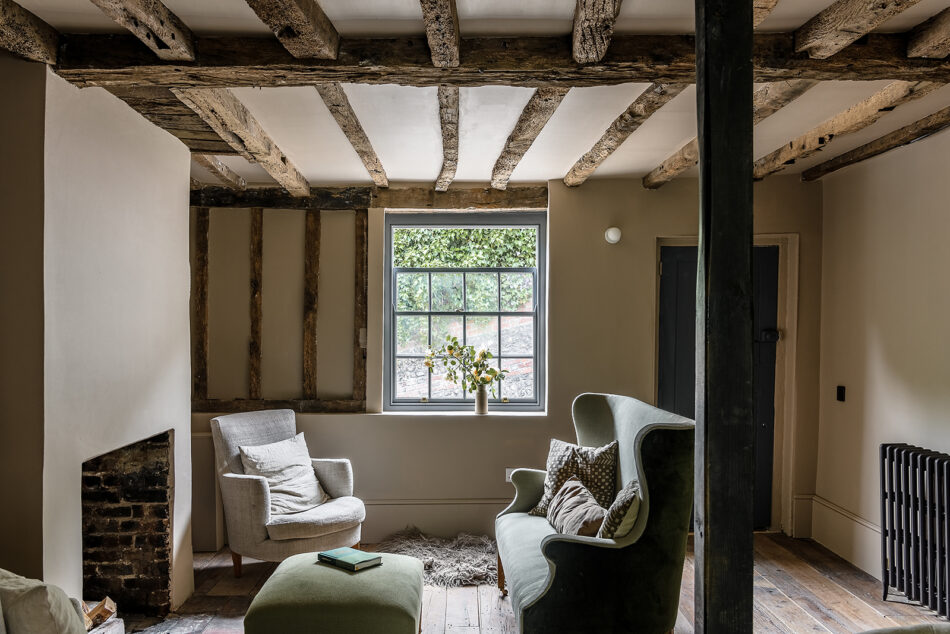 Subtle changes in colour play with the light from room to room, lending an almost wabi-sabi quality to the house

Well House is an exceptional and meticulously restored mid-17th-century Grade II-listed cottage, positioned in the heart of the beautiful and historic market town of Lewes, East Sussex. The 1,100 sq ft cottage unfolds across four levels and has recently undergone an extensive restoration to painstakingly preserve and enhance the countless original details. The cottage has a private tiered garden to the rear and is located on a hidden cobbled hillside street, a peaceful street with no-through traffic once known as Keere Hill; it is also known locally as ‘Scare Hill’ due to its steep incline.

Well House is believed to have originally been built around 1640, on what was then known as ‘copyhold land’, just outside the town walls. The house is a palimpsest of architectural construction techniques; a timber frame sits upon dressed stone foundations, with stones taken from the ruins of Lewes Monastery after King Henry VIII’s 1530s dissolution of the monasteries. A red brick plinth forms a secondary course, and the remaining frame is tile hung with pretty clay peg tiles.

The cottage has undergone a highly sensitive overhaul throughout, with the entire roof and façade tiles re-laid upon modern insulation and weatherproofing. It has been replumbed with copper piping, rewired for a contemporary lighting design and all of the box sash windows have been replaced. The chimney stack has been rebuilt and rendered, while internal wooden frames and beams have been dry ice blasted (a sensitive restoration technique that causes minimal damage to the ancient wood); similarly, the wooden floors were hand-scrubbed with wire brushes rather than machine-sanded. All of the rooms have been beautifully replastered and feature handsome restored cast-iron radiators.

The entrance opens immediately to the main living area, a beautiful open room with untreated pitch pine floorboards underfoot. There is a palpable sense of serenity, with spare detailing and carefully considered spaces for lighting and treasured objects. An open hearth with a working fire lends a sense of warmth to the room, as do the bare timber columns and beams. Walls are washed throughout the house in the quiet, natural shades of paint from Atelier Ellis. The intense pigments create an extraordinary atmosphere, with subtle changes in colour playing with the light from room to room, lending an almost wabi-sabi quality to the house.

The kitchen and dining room lie to the rear of the plan, with a pale grey concrete floor unifying both rooms. The simple cabinetry has been painted in ‘Solstice’, and concealed appliances discreetly housed below sycamore worktops with a natural waney edge. The room is flooded with light care of two glass apertures high above. The dining room is a wonderfully versatile space, acting as a continuation of the kitchen but also distinctly separate. There are multiple box sash windows and a glass door leading to the garden, which frames views onto the verdant raised beds and shrubbery.

A wooden staircase ascends to a living room painted in the rich, atmospheric ‘Plume’. Original cupboards rest in alcoves either side of a Georgian chimney piece with a Victorian cast-iron insert (a later addition). A secondary bedroom can be found to the rear of this floor next to the bathroom; this space has a wonderful quality of light, with a beautiful copper bateau tub at its centre and stunning brassware.

The main bedroom is housed in the garret at the apex of the house; a peaceful room with bare elm floorboards underfoot crowned by a pitched roof with blackened beams. Sash windows at both aspects frame incredible views down to Southover Grange Gardens, Lewes Priory and the dramatic Firle Beacons in the distance.

Entered from the dining room with additional separate side access, the tiered garden is wonderfully positioned to enjoy the sun throughout the day. The different levels have been carefully planted with a selection of shrubs, flowers and grasses including hydrangeas, foxgloves, fennel and irises, while a mature Medlar tree is positioned in prime position on the uppermost tier. A central circular brick-paved terrace provides the perfect spot for alfresco lunches in warmer months.

Flint walls surround the garden; the old town wall of Lewes is positioned to the rear, behind a wooden Japanese teahouse – a remnant from a previous inhabitant who was a practicing Zen master.

For adventures in nature further afield, Lewes is nestled in The South Downs National Park. There are many beautiful walks across the surrounding landscape including The South Downs Way, which takes a spectacular coastal route over the Seven Sisters to Beachy Head, leading all the way to the sea.

Lewes has a history dating to pre-Saxon times, being an immensely important strategic point thanks to its position on the slopes either side of the Ouse Valley. A Roman settlement is believed to have been positioned on the site, followed by Anglo-Saxon and Anglo-Norman settlements, until around the 6th century when the town itself was founded.

There is much to do in Lewes itself, which is home to plenty of independent shops, antiquarian bookshops and a number of antique markets. There are numerous cafes, such as Patisserie Lewes and Flint Owl Bakery, and galleries including The Star Brewery Gallery and The Needlemakers Craft Centre. There are also many independent businesses that stock work by local craftspeople. Glyndebourne Opera House is only a few miles away, and special coaches are laid on at Lewes Station during the season. There is a new cinema and art complex, The Depot, which shows a variety of mainstream and arthouse movies. For a wider range of amenities Brighton is also close by – only 10 minutes by train – with its countless restaurants, shops and cafes.

Lewes is known for its Bonfire Night, which it hosts annually on November 5th. It is a spectacle like no other; with a large costumed parade comprised of various bonfire societies that wind their way through the town to their separate bonfires.

Please note that all areas, measurements and distances given in these particulars are approximate and rounded. The text, photographs and floor plans are for general guidance only. Inigo has not tested any services, appliances or specific fittings — prospective purchasers are advised to inspect the property themselves. All fixtures, fittings and furniture not specifically itemised within these particulars are deemed removable by the vendor.
Well House — Lewes, East Sussex
Interested? Let’s talk