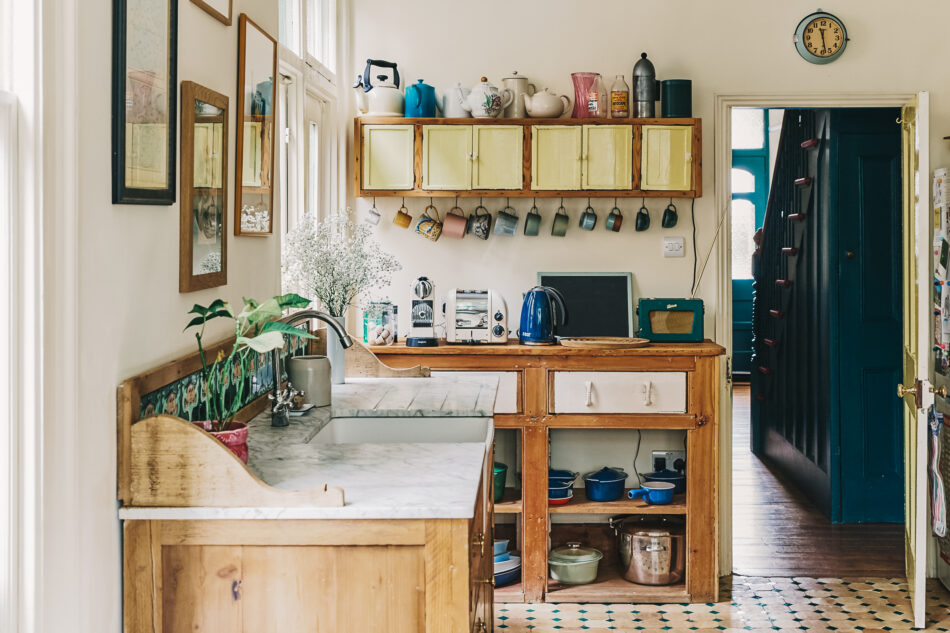 Original fixtures have been restored and repurposed wherever possible in a sensitive, celebratory restoration

This beautiful Edwardian house on Twickenham Road, built circa 1903, has been lovingly restored by the current owners who have carefully preserved its abundance of original features. With three bedrooms and sunlit south-east facing garden, the house extends to over 1,240 sq ft internally and is characterised by a tranquil, serene atmosphere.

The house is found on Twickenham Road, nestled in the centre of Leytonstone; it is a stone’s throw from the independent delis and coffee shops of Francis Road and the wild greenery of the Wanstead Flats. Records suggest that the house had only been occupied by one family before the current owners moved in. As such, many unique original features remained in the house, lying ready for the current owners to uncover and celebrate with their sensitive restoration.

A black and white tiled path leads from Twickenham Road to the arched entrance, which has been prettily lined with a selection of more colourful tiles. The façade is composed of traditional brown and red bricks, which are enlivened by smart green sash window frames bordered by grand ornamental pilasters. To the right of the hallway inside lies a double-sitting room, with the more formal drawing room, warmed by an open fire, at the front of the house. The fireplace here is painted with a marble trompe l’oeil effect and each fireplace in the house has different tiles decorating the surround. The living areas have kept their original floorboards which lead to a set of glazed French doors opening straight onto the garden. A variety of cast-iron radiators are found in each room throughout the house.

A hallway lined with William Morris wallpaper shows the way to the rear of the house and the kitchen. This was made open-plan by the current owners to allow light to flood into the room throughout the day, welcomed into the space via the glazed rear of the house and the large windows that run alongside. The owners repurposed as many of the original fixtures as possible: a dresser, previously an inhabitant of the dining room, has been given new life as the kitchen surface beneath additional storage which was already in the kitchen. The sink unit was designed by the owner in the Elizabethan style, as a freestanding piece of furniture. It is topped with a marble countertop and beautiful green tiles, and completed by a generous ceramic butler sink. The kitchen is laid out over Zellige tiles sourced in Italy by Terrazzo Tiles, to reference the quarry tiles which would once have clad this room. Another set of glazed doors next to the sink open onto the garden.

Journeying upstairs, there are three double bedrooms to be found on the first floor, one of which is currently used as a study and painted in a smart navy blue. Each room has its own distinct colour scheme and contains fitted cabinetry, a fireplace and wooden floors. A shared family bathroom sits amongst the rooms, home to a freestanding cast-iron bath surrounded by patterned green tiles.

The beautiful – and original – glazed conservatory is found at the back of the house, accessed through a stained glass door. This is an incredibly light space that would make the perfect home for a variety of plants and potted foliage.

The house has a private garden to the rear; a stretch of lawn surrounded by borders lovingly planted with roses. It is also superbly located for quick access to larger green spaces nearby: Coronation Gardens is a 15-minute walk from the house and the sweeping Wanstead Flats are even closer. The Hackney Marshes and the River Lea are also nearby, while Victoria Park and Village is a 15-minute cycle from the house.

The recently pedestrianised Francis Road is just minutes from the house, with its variety of independent cafes, bars, shops and restaurants (Marmelo and Yardarm are favourites of those in the know). Also close by is the celebrated Thai restaurant Singburi, which was recommended by The Guardian as one of London’s best restaurants. There are numerous good pubs nearby including the Northcote Arms which has a pizza oven and restaurant in the garden.

A short walk or cycle gets you to the green spaces and facilities of Queen Elizabeth Olympic Park and the canal-side restaurants, bars and workspaces at Here East, while the nearby Wanstead Flats make up the southern portion of Epping Forest, one of the largest expanses of common land in London. The Flats have a number of established walks, with wonderful views of the city. The Leyton boundary garden is also nearby, set up by a local resident and is a real local treasure.

Please note that all areas, measurements and distances given in these particulars are approximate and rounded. The text, photographs and floor plans are for general guidance only. Inigo has not tested any services, appliances or specific fittings — prospective purchasers are advised to inspect the property themselves. All fixtures, fittings and furniture not specifically itemised within these particulars are deemed removable by the vendor.
Twickenham Road — London E11
Interested? Let’s talk