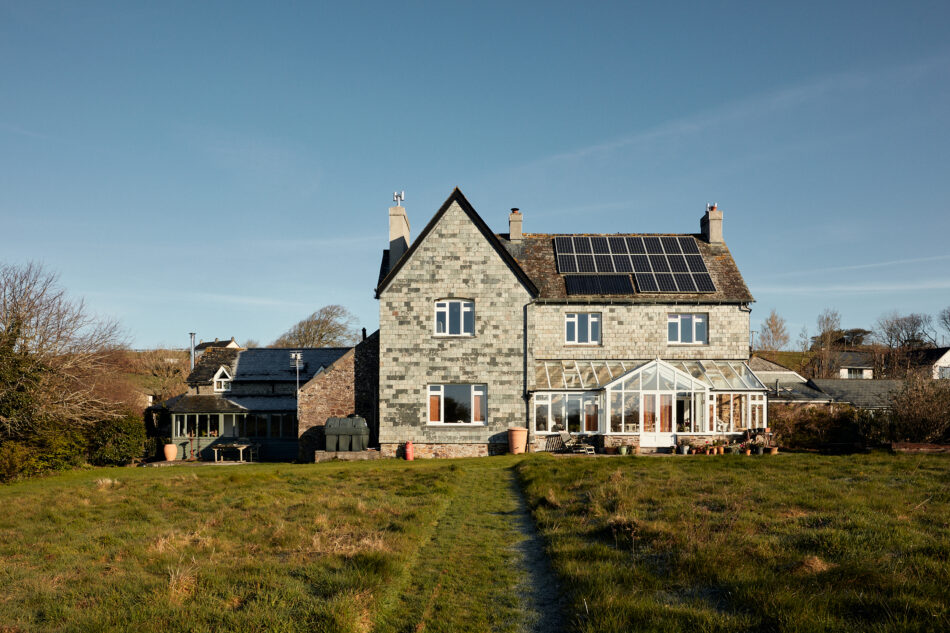 This wonderful 19th-century stone farmhouse stands in an elevated position overlooking rolling hills and the dramatic east-Cornish coastline. Delightfully rural and peaceful in feel and setting, the house is also very well-connected to both road and rail; a six-minute drive to the mainline rail station in the charming village of St Germans and just a short distance more to the A38, leading west further down into Cornwall or east across the Tamar to Devon. Internal accommodation extends to approximately 5,000 sq ft across three storeys; it includes five bedrooms with two further attic rooms and a self-contained one-bedroom annexe connected to the house. Outside, extensive, mainly south-facing grounds include a five-acre field.

The original farmhouse, believed to be built in 1825, is constructed of Cornish stone, a grey/brown slate getting its warm colour from the rich mineral deposits in the area. C1850 the house was extended and remodelled at the western end in the same local vernacular, probably to support the large family and workers of a tenant farmer.

Today, high stone skirtings and phantom dado rail – used as an alternative to timber where there was a fear wood might be redeployed for fuel – line the wide hallway. Many other original features remain, from the handsome Georgian staircase to the slate-lined dairy and Victorian fireplaces in the sitting room. The current owners have done much to repurpose and re-use as many of the original materials as possible in their renovation. For example, reclaiming the sturdy Georgian sandstone slabs unearthed in the original kitchen to make a paved area outside the annexe, in doing so, discovering the ‘maker’ marks etched on the undersides that denoted who was paid what.

The approach to the farmhouse is via a winding country lane, up a steep hill from Polbathic, then dropping down into the hamlet, where a gated entrance leads to generous parking. Other farmstead buildings were converted forty years ago, making Tredis a small hamlet with a well-established community of some fourteen houses and cottages. For more information, please see the History section below.

The primary entrance at the side of the house is through a sturdy door set deep within the stone. Constructed from Cornish brownstone, two-foot-thick walls with traditionally-hung Delabole blue slate on the south side imbue the house with a sense of solidity and security.

Entry leads to a vestibule, and beyond opens to a generously proportioned hall through a classical stone arch, likely the original Georgian entrance arch relocated in the midcentury remodelling. A great sense of volume and light is immediately apparent, provided by high ceilings throughout. The entrance hall is flanked by the principal rooms of the house; an airy south-facing, double reception room with a full-width conservatory beyond and, on the north side, a study and large slate-lined pantry, the old dairy. This room benefits from the original Victorian slate table, flag floor and slate shelving on three sides, perfect for keeping food cool.

Opposite the pantry is a large, south-facing kitchen; windows flood the space with light and provide stunning views over the garden and the rolling landscape beyond. Bespoke cabinetry is painted a beautiful shade of chalky salmon-red; there is a four oven retrofitted electric Aga, and solar panels installed by the current owners have 14 years FIT remaining. Terracotta tiling underfoot creates a warm, welcoming and traditionally appointed space. A large utility and WC/shower room lie adjacent to the kitchen; the annexe is beyond.

Two original staircases provide access to the first floor; a principal U-shaped staircase from the hall has shallow treads and, with its huge stairwell window, forms the heart of the original structure. The Victorian back stairs are at the end of the hall. Five double bedrooms flank the wide hallway on the first floor. The main bedrooms are south-facing with beautiful views across the deep valley to the sea. The principal bedroom has a spacious en suite dressing room with the same lovely vista; the shower here and in the adjacent family bathroom have floors made of pebbles from nearby Downderry beach.

Two attic rooms currently provide a playroom and an artist’s studio; both are very bright spaces. There is also a WC/Shower on this floor and a large further attic with the potential for additional accommodation subject to planning.

The annexe, originally the dual-purpose ‘chall’ barn, has its own private front door or alternatively can be accessed through the main house. A lean-to sunroom opens to a reclaimed sandstone flagged terrace with the maker’s marks on their undersides, from where a stable door opens into the annexe. A calm, simply appointed space with whitewashed stone walls, the ground floor comprises a reception-dining room with a kitchen adjacent. Above is a large double bedroom with a deep window seat providing, if required, additional sleeping space. An en suite bathroom with a separate bath and shower is bright and benefits from dual aspect windows. The annexe was previously used as self-contained accommodation for family members and short-term holiday rental.

The grounds, which extend to approximately two acres, open out from the house to a large lawn; not overly manicured, it is a haven for wildlife. Beyond the lawn is a five-acre field, currently used for occasional grazing on an informal basis. To the right is an old apple orchard and beyond a woodland, leading to a dell with a brook.

There are a number of lovely circular walks from the doorstep ranging from 30 minutes to over three hours. These include the east Cornwall stretch of the glorious South West Coast Path, just a few minutes drive or half an hour on foot along quiet lanes & footpaths from the house. The AONBs of Rame and the Tamar Valley offer more fantastic walking, with a great variation in landscape from valleys and woodland alongside inland tidal Estuaries and others wilder along the coast.

There are great mainly community-run village post office/shops in the villages of St Germans, Downderry and Crafthole, and independent pubs with music, good food and lashings of community spirit, namely The Halfway House in Polbathic, The Eliot Arms in St Germans and The Rod & Line in Tideford.

A quiet corner of the Cornish coast, there are beaches aplenty. Portwrinkle, Downderry and Seaton are the closest and handy for a quick dip, while the wonderful vast stretches of Whitsand Bay are also nearby.

The settlement of Sheviock was first recorded in the Domesday survey of 1086 and is thought to be named from the Cornish word ‘sevi-ack’, meaning ‘abounding in strawberries’.  The ecclesiastical parish borders the parishes of St Germans and Deviock and lies between two bodies of water, the tidal Lyhner River to the north and Whitsand Bay, on the English Channel, to the south. The main settlements are the villages of Sheviock itself, Crafthole to the south and to the south west the former fishing villages of  Portwrinkle and Downderry. To the north  the village of St Germans is home to the stunning Grade I-listed Norman Priory and Repton-landscaped Port Eliot Gardens and House.

There is some evidence of a church in Sheviock village as far back as 1193. The current parish church of  St Mary was consecrated by the Bishop of Exeter on 13 Oct 1259. Over the following centuries, various additions were made. 1851 saw a Victorian restoration. It is one of the few churches in Cornwall originally built with a spire.

A Methodist chapel was opened at Crafthole in 1819. This was replaced by a larger building in 1843. The congregation continued to grow and, in 1867, a third chapel was built on the site of the 1843 building and this is still in use. It is in the Saltash Methodist Circuit.

A Celtic cross at Carracawn in St Germans is evidence to show the area was settled in pre-Norman times.  In the village of Crafthole there are two well-preserved Latin crosses,  both illustrated in Blight’s Ancient Crosses of Cornwall, while Duloe stone circle a few miles to the west is evidence of far more ancient habitation.