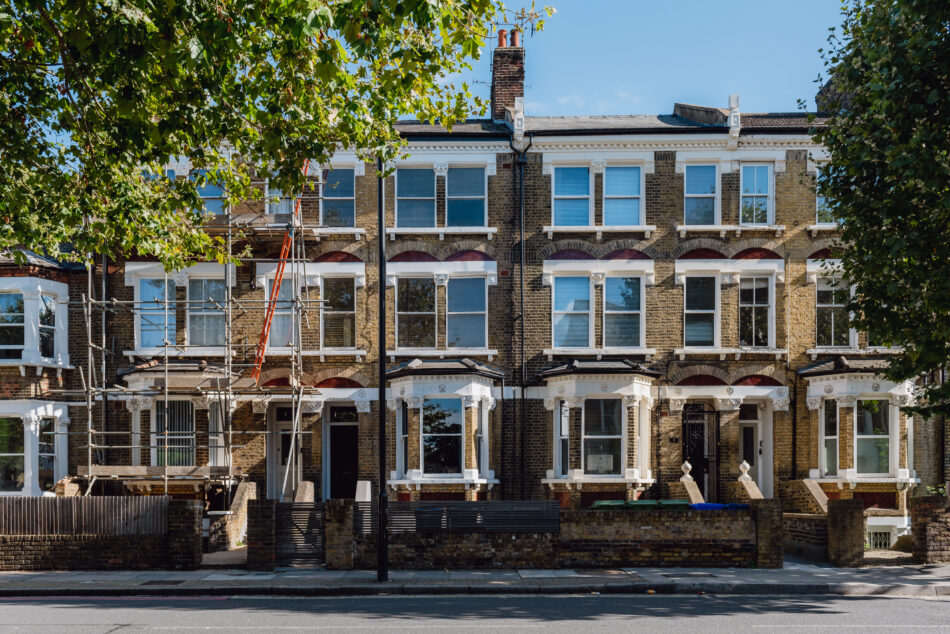 This immaculately renovated one-bedroom apartment occupies the raised ground floor of a handsome Victorian terrace on Trafalgar Avenue, which borders Burgess Park in south London. A considered approach has been taken throughout, with contrasting tones and natural materials creating a series of calm and pensive spaces.

Old Kent Road follows the approximate line of the Roman Watling Street, connecting London to Canterbury. The area was primarily built up following the success of the late Georgian economy, with leafy suburbs slowly spreading southwards and generous streets laid out from the 1820s onwards. Trafalgar Avenue was one of the first main tributaries to be built out, with gateway buildings and public houses fronting the larger road. Begun around 1820, it was more or less complete by 1870. The suite of fine intact early 19th-century terraced buildings with largely unaltered exteriors has resulted in a Conservation Area status for this part of the street.

There is a wonderful sense of flow to this apartment. Each room has been carefully considered to maximise space in a way that makes the best of the building’s period proportions, with clever storage solutions and bespoke elements neatly introduced. Paint from Farrow & Ball has been used throughout, including ‘Hague Blue’ in the living room, ‘Vert de Terre’ in the bedroom and ‘Middleton Pink’ in the bathroom.

The living room occupies the front of the plan, with a large west-facing bay window that fills the room with light in the afternoons and evenings. The bedroom sits at the quiet rear of the flat and receives a beautiful, soft morning light; Tongi Malay sisal carpeting runs underfoot throughout. The bathroom is adjacent to the bedroom and has been smartly fitted with handcrafted Calatrava volcano tiles and a freestanding rolltop bath.

The kitchen is a slight step down from the hallway and has been designed to function flexibly as both a kitchen and workspace. It is incredibly bright, with glazed wooden doors at one aspect and windows at the other. The kitchen unit is made of solid wood and its freestanding nature allows for easy changes in configuration. There are solid oak worktops that also form a smart cover for the Belfast sink, plus a Rangemaster. This space also has a large understairs storage cupboard.

Trafalgar Avenue forms the eastern edge of Burgess Park, which has recently undergone huge redevelopment and has a community cafe. As well as expansive open, grassy spaces, there are tennis courts and football pitches, a new play area, a BMX track and Quietway cycle routes, all set amongst beautifully planted pathways. The apartment lies equidistant between Bermondsey and Peckham, which are both well-known for their excellent restaurants, pubs and good transport links. Local favourites in Peckham include Mr Bao, Bánh Bánh and Pedler, as well as The White Horse and Taco Queen, while Bermondsey is home to Café Murano, Pizarro, Jose Tapas, Casse Croute and Pique-Nique.

Please note that all areas, measurements and distances given in these particulars are approximate and rounded. The text, photographs and floor plans are for general guidance only. Inigo has not tested any services, appliances or specific fittings — prospective purchasers are advised to inspect the property themselves. All fixtures, fittings and furniture not specifically itemised within these particulars are deemed removable by the vendor.
Trafalgar Avenue — London SE15
Interested? Let’s talk