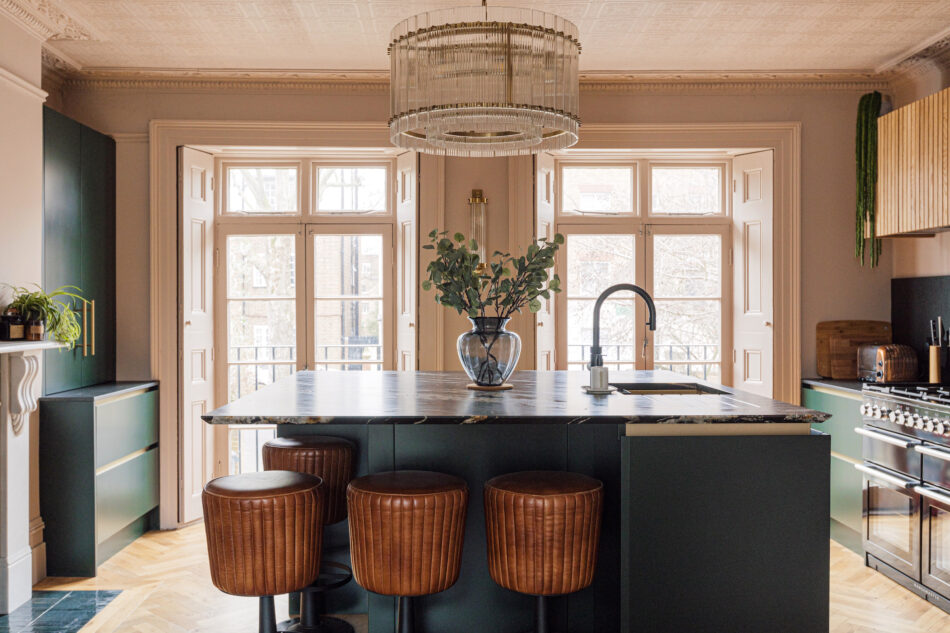 Built at the end of the Georgian era and the beginning of Queen Victoria's reign, the house uniquely bears original hallmarks of both eras

This handsome detached Victorian home lies on a quiet no-through road in north Islington, set within the Tollington Park conservation area and immediately adjacent to a charming park and cricket pitch. The four-bedroom White Lodge has been the subject of a recent and comprehensive renovation, with a particularly exceptional bespoke kitchen and beautiful bathrooms. Internal accommodation is laid out over three levels and extends to over 2,250 sq ft, containing a plethora of original features including multiple panelled box case windows with shutters, cast-iron radiators and exceptional plasterwork throughout. Additionally, there is a serene and private mature garden to the rear, measuring some 100ft in total.

The White Lodge occupies the top three floors and majority of the building; it is one of four residences within. The freehold to the entire building, driveway and grounds belongs to The White Lodge and is included in the sale.  There is an underlying leasehold attributed to this home.

Tollington was first recorded as a settlement circa 1000AD, with some nine farmsteads. By 1540 it had become part of the manor of Highbury, but the hamlet ceased to have a separate identity by the 18th century; it later expanded into a well-to-do London suburb by the 1830s, in line with the general expansion of central London and the coming of the steam train.

The White Lodge was one of the earliest houses to be built in the area, at the very tail end of the Georgian era and the beginning of Queen Victoria’s reign in the 1830s. As such, it uniquely has architectural features of both eras, though is predominantly Victorian in appearance. Originally called ‘The Villa’, it is attributed to the celebrated architects Gough and Roumieu who built several other grand villas with large gardens on the adjacent Tollington Park. Nearby St Mark’s Church and some of the finest buildings in Islington, including the Almeida Theatre, were also built by the noted practice.

The White Lodge is set back from the quiet residential street behind a large, wide forecourt with private and sole parking space for two vehicles, an EV charger and a pretty cherry blossom tree. It is entirely rendered in a chalk-white colour and has beautiful fenestration, including six/six sash and French windows. Raised wide-set steps ascend to the grand Georgian doorcase, with a large roundhead fanlight resting upon a slim architrave and recessed fluted half-columns.

Entry is to a capacious hallway with beautiful cornicing and Victorian pine floorboards. This leads to a spacious kitchen and dining room, with expansive original glazing at both east and west aspects allowing the room to be flooded with light; all windows are framed with panelled box casements and shutters. There is exceptional decorative plasterwork cornicing to the ceiling and heated oak parquet flooring underfoot, while a statuary marble chimneypiece with cast-iron fire grate grounds the room.

Contemporary obsidian green-painted cupboards were built especially for the space, with black Belvedere granite surfaces sitting atop a large central island and the surrounding periphery cabinetry. The cooker is a Rangemaster ‘Nexus’ and the tall concealed fridge and freezer units are by Liebherr; there is also a large built-in wine cooler. The entire kitchen area is painted in a luscious ‘Desert Rose’ by Paper & Paint Library, while the dining area is papered in a design by House of Hackney; both areas flow effortlessly, allowing for sociable cooking and dining. Further rooms on the ground floor include a large utility room and stylish guest bathroom, with Thomas Crapper fittings and wallpaper by Divine Savages.

The central staircase leads to the first floor and the first of four bedrooms, which is painted in a soothing ‘Stoney Ground’ by Farrow & Ball. It has a pitched roof and an en suite bathroom by West One Bathrooms with geometric tiles underfoot. The second bedroom is currently configured as a home office and study, painted a deep green colour.

The living room lies at the front of the plan on this level; bathed in light from the full-height sash windows, it has a statuary marble chimneypiece that surrounds a warming wood-burning stove. A door connects from this room to a capacious secondary living room, a deeply enveloping space painted in Farrow & Ball’s dark burgundy ‘Brinjal’, upon a historic design of anaglypta wallpaper. A built-in bar area is positioned to the rear of the room, where French windows open to an outdoor terrace with plentiful seating – an exterior sitting room of sorts – with lovely views to the garden.

Two additional bedrooms can be found on the top floor at the apex of the house; they share a spacious shower room. The main bedroom has plentiful deep built-in wardrobing and walls are papered in a richly patterned print by House of Hackney. The second bedroom on this floor is set within the roof’s pitch so has a light, bright atmosphere and its own small private terrace overlooking the steeple of St Mark’s Church. The shower room acts as a contemporary jewel box, beautifully encased in glistening dark green tiles set in a herringbone pattern, offset by handsome polished brassware and decorative wallpaper. All fittings are from West One Bathrooms.

The walled garden is exceptionally generous for central London, at 100ft long and with a wide plan. A large paved terrace leads to a deep lawn, surrounded by beds of roses and shrubs, while mature trees afford privacy and a sense of seclusion. In the summertime, apple, pear and damson trees bear a bounty of fruits.

Additional open space is merely at the end of the road at the Wray Crescent Open Space, a large park with over five acres of greenery. There is a grass cricket pitch (the only one in Islington), a children’s playground, a ball court and a grass meadow.

Tollington Place is a pretty cul-de-sac located opposite the greenery of the Wray Crescent Open Space park and cricket pitch. Crouch Hill, Finsbury Park and Highgate are all within easy reach. There are several highly regarded eateries nearby including the excellent Big Jo cafe, Max’s Sandwich Shop and Dotori. The Faltering Fullback pub is a short walk away and further offerings are available on Stroud Green Road, known for its organic shops including Urban Native and Butler’s Deli, an independent wine shop and delicatessen. Also nearby is the open expanse of Finsbury Park and just to the north is Parkland Walk, a much-loved trail on a disused railway line that connects Finsbury Park to Highgate.

There are several stations for transport nearby including Finsbury Park for Victoria and Piccadilly Line services and mainline trains as well as Crouch Hill Overground station and Archway Underground station (Northern Line).

Please note that all areas, measurements and distances given in these particulars are approximate and rounded. The text, photographs and floor plans are for general guidance only. Inigo has not tested any services, appliances or specific fittings — prospective purchasers are advised to inspect the property themselves. All fixtures, fittings and furniture not specifically itemised within these particulars are deemed removable by the vendor.
The White Lodge — Tollington Place, London N4
Interested? Let’s talk