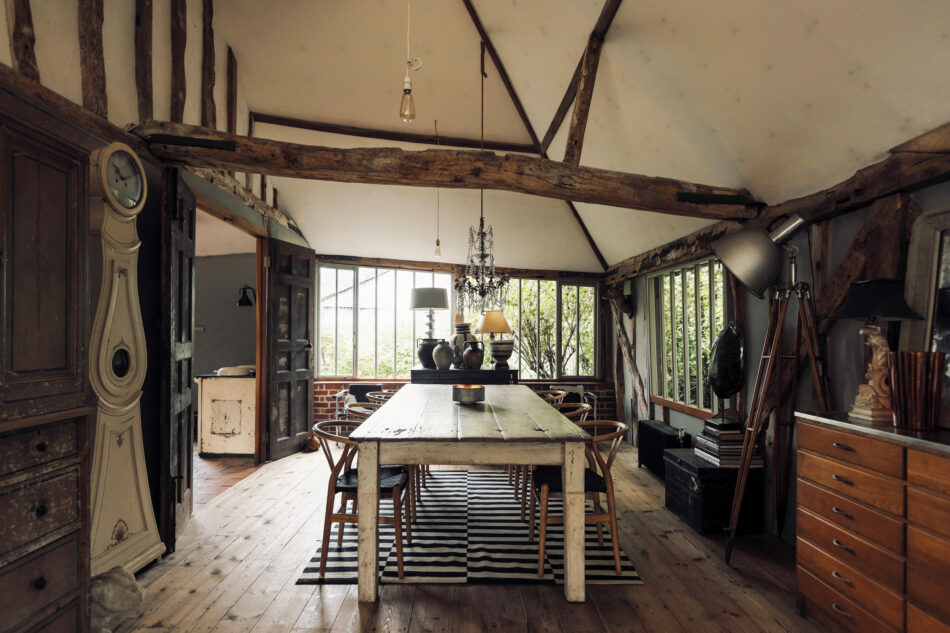 This detached three-bedroom former workshop dates from the late 18th century and lies in the village of Saint James, one of a collection of 12 villages in eastern Suffolk known as The Saints and surrounded by the Suffolk plains. The house is unlisted and as such, allowed the current owner to radically transform the building with the addition of a principal bedroom wing, which sympathetically respects the original fabric. The house presents a sublime contrast between the original core and the contemporary renovations.

A highly intimate and private setting, the house is surrounded by mature gardens, obscuring it from the street. A patinaed shepherd’s hut lies at the rear of the garden; this has an electricity supply and is heated by a wood burner, making for a perfect home office or guest accommodation.

Saint James is a pretty village nestled in the heart of ‘High’ Suffolk on the periphery of the Suffolk Coast and Heaths Area of Outstanding Natural Beauty. Endless vistas abound, archetypical of East Anglia. Saint James is known to be the highest village locally and the Church Spire is reputedly the highest point in eastern Suffolk. The area is also known as bow and arrow country, alluding to its ancient past and archaeological significance. For more information, please see the History section below.

Entrance to The Old Workshop is via the charmingly appointed front garden and through a central front door leading directly into the Shaker kitchen, a tour de force in marrying reclaimed antique materials with contemporary elements. This is a voluminous double-height space painted black, with terracotta tiles underfoot and a mezzanine serving a multitude of purposes. There is contrasting cast-iron hardware with turn-latches on the lower cabinetry and an oversized custom sink by C. P. Hart. The opposite side of the kitchen has a 19th-century wood-burning stove and an Aga dating from the 1950s, which has been comprehensively modernised internally.

Adjacent to the left of the kitchen is the reception/dining space. This is an immensely characterful and bright room extending over 39ft in length. Over fifty per cent of the wall space is glazed with narrow-paned rectangular windows. Due to its past as a workshop, much of the joisting and joinery has been repurposed and recycled from other houses, or deconstructed carts and one-way barges which frequently travelled inland on now unnavigable waterways. This creates a wonderfully whimsical and playful space that contrasts with a bespoke, poured-in-place concrete fireplace. French doors open onto a decked outdoor seating area and wooden floors run underfoot.

To the other side of the house is the bedroom wing, housing a principal suite designed by renowned architect Mark Prizeman. Constructed in concrete with a hardwood roof left raw, the contemporary construction and aesthetic magnificently contrasts with the 18th-century core. Entry is through a set of 16th-century double doors found in Lithuania and believed to have come from an Orthodox Monastery. A frameless glass pocket door frames a tranquil aspect to the garden and, when opened, creates a seamless transition between the interior and exterior spaces. A series of wardrobes create a partition to the bathroom, also left in raw waterproof concrete. The end wall of the bath has multi-paned glazing, echoing the other side of the house. An antique copper bath forms the centrepiece and is juxtaposed with a contemporary freestanding stainless steel tap by Vola and a bespoke concrete sink from Italy. There is underfloor heating throughout the suite.

Two further bedrooms lie in the core of the house and a family bathroom leads off the corridor, back towards the kitchen. All rooms receive plenty of natural light and feature beautiful, repurposed cast-iron radiators. The bathroom has Edwardian-inspired hardware and a large enamel clawfoot bath. Original repurposed joinery remains a focal point throughout.

The rear garden features the aforementioned heated and electrically-supplied shepherds hut. This makes for a perfect home office or could easily be reconfigured into additional guest accommodation. The front garden has a large garage with a WC and is also supplied with electricity; currently serving as storage, this would also make for a good workshop (as it has done in the past) or further accommodation. There is off-street parking adjacent to the garage.

The garden has been thoughtfully designed and is filled with an abundance of plants and trees. Dense hedging at the perimeter ensures privacy while a wisteria climbs over the rear external wall. A crabapple tree is central to the space, blossoming in the spring and bearing fruit in the autumn.

Saint James is just a 15-minute drive from Bungay, which has numerous farm shops and home stores. Closer still, the village of Metfield is 1.5 miles away and is home to the charming Metfield Stores, which specialises in locally sourced seasonal produce, dairy, meat and freshly baked bread. Fressingfield is four miles away and home to the Fox & Goose, renowned for its outstanding food. There are a plethora of beautiful cycle rides and walks nearby, through byways and bridleways.

Halesworth is also a 15-minute drive and provides a wide variety of facilities including supermarkets, shops, library, doctors surgeries and numerous cafes, pubs and restaurants. Southwold, along with the entirety of the beautiful Suffolk coast, is a 20-minute drive.

The High Suffolk landscape gives a glimpse into history, providing a representation of what much of the British Isles would have looked like prior to the enclosures acts of 1604, which divided the landscape into parcels of hedge-rowed fields. The landscape is characterised by a tapestry of open grassland known as greens, commonly managed and owned for the grazing of livestock and tremendously rich in biodiversity. A stronger than normal class of smallholders and a weaker than average gentry ensured the preservation of these quintessentially vernacular spaces.

Most prominent of the archaeological finds in the area is the Saxon burial ground at Sutton Hoo to the south (the subject of the recent film The Dig). Within walking distance are the ruins of the Bishop’s Palace at South Elmham Minster, which lies a couple of miles to the north. Closer still is South Elmham Minster itself, described as “one of the most romantic and enigmatic ruins in England”, it is a hauntingly beautiful Norman chapel set amongst the trees, built within Roman or potentially Iron Age earthworks.