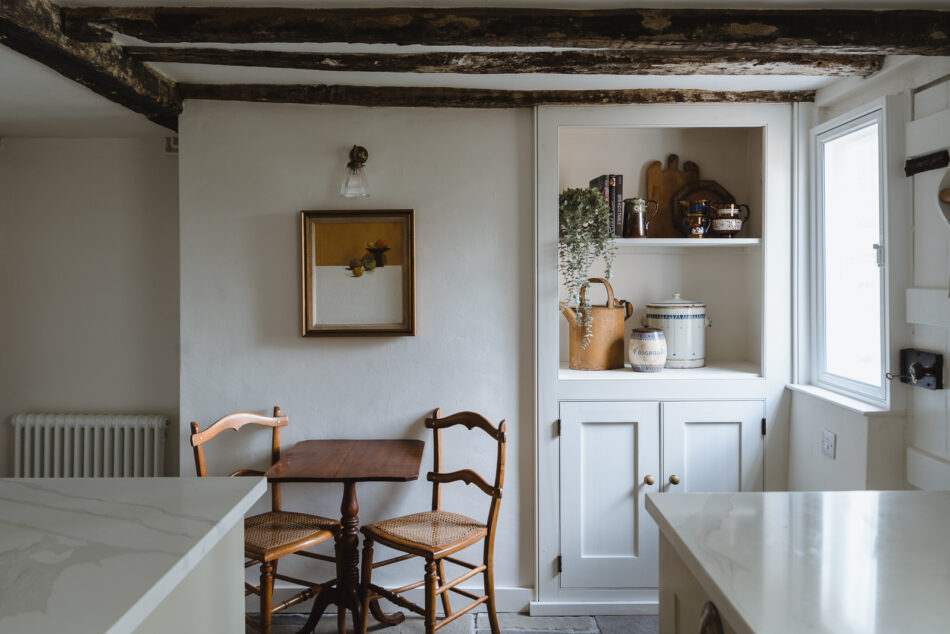 The house is believed to date back to 1450; sections of the original timber frame are still visible and are beautifully revealed internally

The Baker’s House is an exceptionally characterful Grade II-listed house set within a conservation area in the pretty and peaceful village of Mersham, only 10 minutes from Ashford International station. Originally built as part of a greater Wealden Hall house in the early 16th century, it was the village bakery for many years and is still complete with authentic bread ovens. Accommodation is set out over some 1000 sq ft, with three bedrooms and a private west-facing garden. The house has been the subject of sensitive restoration in recent years. Many of the original architectural features have been carefully preserved, including the Kent peg tile roof, sash windows, oak beams, and the glorious Victorian glass shop frontage.

This home, which directly faces the pretty village green, was originally part of the game keeper’s lodge for the nearby Hatch estate. The greater building’s origins are believed to be dated to 1450; sections of the timber frame are still very much visible and beautifully revealed internally. Later a public house called the Royal Oak, it was also known as a smuggler’s haunt due to its proximity to Romney Marsh.

The Baker’s House forms the southern range of this original building and was a huge part of village life for many years. Some of the older residents still fondly remember the last baker to live here, also moonlighting as the local sexton and verger for Mersham church, he was known as ‘The Midnight Baker’ for his night-time deliveries. For more information, please see the History section below.

Rendered and painted chalky white with a Kent peg tile returned hip roof, the house stands proudly at the end of the row with a pleasingly symmetrical façade. There are two margin light sash windows on the first floor and a double canted bay frontage, with recessed central double panelled doors and rectangular fanlight on the ground floor. A large cornice fascia on enriched consoles crowns the expansive fenestration. The front façade is an addition to the original timber-framed structure and was completed in the early 19th century.

The modern-day entrance is at the side of the house and opens immediately to the hall and dining room. Large flagstones run underfoot and are sealed with beeswax for a natural protective finish. A box staircase lies directly ahead, with a cloakroom set discreetly underneath. Something of a remarkable feature, the original bread ovens with handsome cast-iron doors provide the centre-point to the room. The sitting room is to the front of the plan, carpeted in a comfortable and cosy natural sisal. The expansive original fenestration allows the space to be flooded with light.

To the rear of the plan, overlooking the garden is the kitchen featuring beautifully exposed beams. Panelled cupboards are painted in Farrow & Ball’s ‘Ball Green’ with honed slabs of pale quartz resting atop, complimenting a built-in dresser along one wall. A double butler sink is thoughtfully positioned in front of the window, opposite the cream Rangemaster stove. Several appliances are cleverly concealed behind cupboard doors, and there is a large pantry to the rear of the room, with space for a fridge/freezer and washer/dryer.

Ascending the staircase, sleeping quarters are carpeted in natural sisal to compliment the sitting room below. All rooms are painted in chalky whites to emphasise the excellent quality of light that flows through this series of rooms. The main bedroom is set to the front of the plan, enjoying the east-facing morning light through its two box sash windows overlooking the village green. An en suite bathroom features traditional sanitaryware, chrome-plated brassware and a separate shower enclosure.

Two further bedrooms easily accommodate double beds. The rear bedroom is currently arranged as a charming study, overlooking the garden; a pretty Victorian cast-iron fireplace is a later addition. The main bathroom services both of these rooms and is thoughtfully positioned between the two. Traditional fittings include a boxed bath and walls clad in butt and bead panelling. An ancient oak beam is set at eye level and provides a wonderful historical focal point.

The rear garden is wonderfully private, completely fenced in timber and laid to lawn. The terrace is paved with red bricks and provides the perfect spot for alfresco evening drinks and to enjoy the sun setting to the west. A deep-set plant bed leads to a beautifully mature sycamore tree, from where the house’s rear aspect can be best enjoyed.

The pitches of the separate hipped roofs form a wonderfully unique silhouette; the textures of the clay peg tiles are punctuated by the singularly tall chimney stack, which served the original bread ovens below. There is convenient additional side access to the garden from the house’s private external pathway, still laid with setts from horses stables that used to lie behind the house.

Mersham village has a well-stocked local shop and post office, whilst the excellent Farrier Arms pub is owned and operated by a group of village stakeholders and overlooks a river to the rear. It offers delicious homecooked food and hand-crafted ales from its microbrewery, located next door.

The neighbouring village of Smeeth is home to the Evegate business centre, housing independent provisors, an antique showroom and a fitness & wellbeing studio. The Courtyard at nearby Mersham Le Hatch is set in a beautiful location and is home to excellent restaurants and a soon-to-launch farmers’ market. Further amenities are in Ashford, including a large branch of Waitrose.

The 2021 Michelin starred Hide & Fox at Saltwood, Hythe, is just 13 minutes drive away. It offers modern British cuisine served in an intimate and relaxed environment, focusing on carefully sourced seasonal ingredients and fine wines. Chef Allister Barsbys’ fresh take on classic British and European food is informed by a love of fresh seasonal produce, his roots on the Kent coast, and his in-depth experience as an award-winning chef.

The historic town of Rye is 30 minutes away by car, as is the UK’s only desert Dungeness, with its RSPB nature reserve and pebble beach. Although a peaceful village, Mersham is just moments from the 10A junction of the M20, connecting many of the favoured Kentish locales from the southern outskirts of Greater London down to Dover and the Kent coast. For incredibly convenient access to central London, Ashford International station is 10-minutes away, with journey times to St Pancras talking 38 minutes precisely.

The village of Mersham (pronounced ‘Merzam’ in the Kentish vernacular) lies within the boundary of the Mersham Hatch estate. It is set in the beautiful North Downs, classified as an Area of Outstanding Natural Beauty (AONB).

The surrounding area comprises 2,700 acres of arable and dairy farmland, as well as ancient woodland; there is an extensive network of public footpaths across the estate offering wonderful country walks. The village’s origins lie in Saxon times and it is mentioned in the Domesday Book.