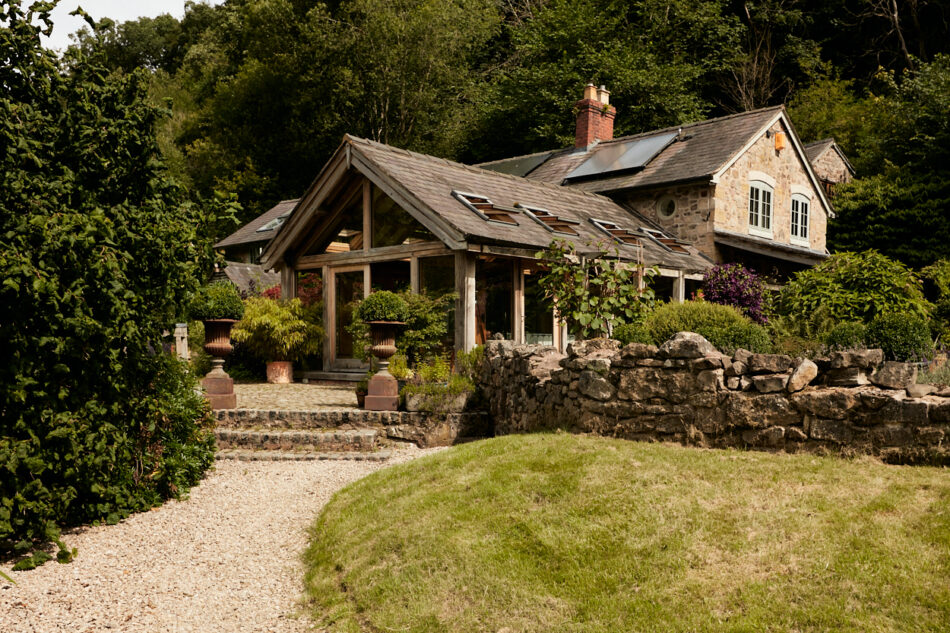 A wonderful example of a traditional Welsh longhouse, nestled in the bucolic Candy Woods

This wonderful wisteria-covered Welsh stone longhouse is nestled in a serene valley in Oswestry, Shropshire, and surrounded by the bucolic Candy Woods. The four-bedroom house has been carefully restored and renovated by the current owner to create a beautiful, light-filled home, which lies in a fantastically verdant position overlooking a natural pond and meandering river. Tucked at the end of a winding road, Tan y Coed is complete with a separate one-bedroom annexe and an extensive studio space with a carport underneath. It is surrounded by a large garden, rolling hills and mature woodland and is marvellously private.

Tan y Coed, or “under the trees”, is a brilliant example of a Welsh longhouse. Traditionally designed to house livestock (either cows or sheep) on the ground floor and living accommodation on the first, these houses are found across Wales and the rest of the country. The earliest examples are thought to have been built in this area in the 13th century using local stone; this house most likely dates from 1800.

The current owner – who has lived at Tan y Coed for over 20 years – oversaw a thoughtful restoration of the house, renewing the windows with hardwood frames, laying slate floors on the ground floor and extending the living space into a glass atrium. Solar panels were also installed on the roof.

A driveway with parking for multiple cars extends behind a gate. From here, a path leads to the house and its two front doors; the formal entrance to the front, which sits underneath a porch, and a more frequently used side entrance, which leads directly into an open-plan kitchen, dining area and living area.

The kitchen is composed of white cabinetry with wooden countertops, a white-brick tiled splashback and an Aga, all of which have been set against wooden floorboards. Beyond is the new oak extension, bathed in light throughout the day through the stretches of glazing on three sides and warmed by the underfloor heating, beneath the slate floor and the rest of the downstairs. Behind the kitchen is a useful utility space.

A more formal dining room lies beyond. This occupies the original part of the house and has parquet floors and a wood-burning stove; it is the perfect space for entertaining and feels wonderfully cosy as winter nights draw in. The space leads through to another sitting room, which also has wooden floors. An original inglenook to one side of the room is now home to another wood-burning stove, while exposed beams run the length of the ceiling overhead.

A set of contemporary open-tread stairs lead upstairs to the bedrooms and bathrooms, which have lovely views over the garden and surrounding countryside. There is a balcony off the main bedroom, which is the perfect spot for a morning coffee and the evening sun.

Behind the house, a barn has been converted into a one-bedroom annexe, constructed from the same Welsh stone as the house. Here, there is a kitchen downstairs and a raised living space on the first floor, with a bedroom beyond. To the other side of the house, near the driveway, is a large new block that houses two open carports, plus a garage underneath and an expansive open-plan room above. This would be perfect for an office or studio space.

The gardens that surround the house are beautifully planted with thousands of daffodils, plenty of wild garlic and raised vegetable beds; happy afternoons can be whiled away watching otters play on the front lawn, which is surrounded by bamboo hedging. A stream meanders from the end of the garden lawn towards the house, which fronts onto a pond directly in front of the house. There is an abundance of wildlife, including red kites, buzzards, dragonflies and butterflies, as well as local families of ducks and moorhens.

A new terrace raised on stilts has been installed above the pond. The owner has planted over 450 trees during their time at Tan y Coed and also keeps five beehives in the garden. There is a geodesic dome greenhouse where the current owner grows a wealth of tomatoes. There is also a folly bell tower in the garden – fantastic for alerting all when lunch is ready.

There are many walks nearby, including in the surrounding Candy Woods, once owned by Ian Fleming. Ancient oaks and chestnuts fill the woodland, while paths weave along the hillside to the top of the Old Racecourse, an 18th-century racecourse that links to Offas Dyke, which runs from North to South Wales.

Oswestry has plenty of independent shops, bars and restaurants including Sebastian’s and The Town House. Walking to the local pubs for Sunday lunch is a must on a winter day; there is also a real ale pub and microbrewery a 25-minute walk away, in the village of Trefonen.

Shrewsbury is around half an hour by car from the house; a picturesque and historic market town with an excellent selection of independent shops, restaurants, cafes, supermarkets and boat tours along the River Severn. It has a renowned indoor market, which is open several days a week.

There are regular rail services from Shrewsbury to London Euston (via Crewe), with a journey time of just over two hours, and routes north to Liverpool, Manchester and Sheffield in around two hours.

Please note that all areas, measurements and distances given in these particulars are approximate and rounded. The text, photographs and floor plans are for general guidance only. Inigo has not tested any services, appliances or specific fittings — prospective purchasers are advised to inspect the property themselves. All fixtures, fittings and furniture not specifically itemised within these particulars are deemed removable by the vendor.
Tan y Coed — Oswestry, Shropshire
Interested? Let’s talk