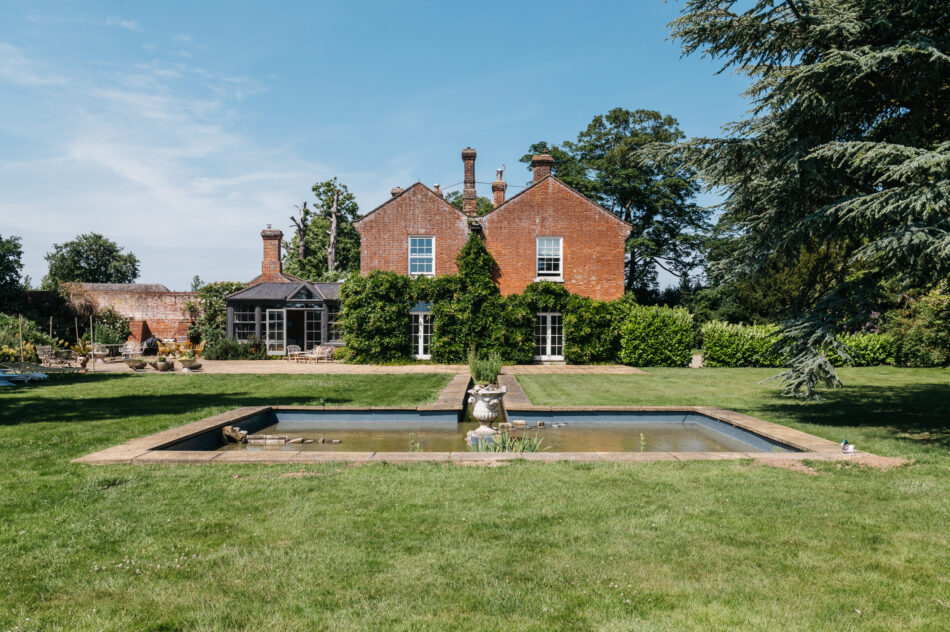 Set within twenty acres of gardens, orchards and paddocks, a few miles south of the beautiful north Norfolk coast, lies this elegant six-bedroom Georgian house and its charming ancillaries. It has been the subject of a refined and in-depth refurbishment throughout its 5,200 sq ft, with six bedrooms and a further 3,500 sq ft of potential conversion in courtyard workshops, garages, a thatched shed and a wonderfully voluminous barn.

The house is situated off a quiet country lane between Hickling and Barton Broads, just north of the village of Sutton and east of the larger market town of Stalham. A formal, gated driveway meanders toward the house, looking out onto acres of paddock and wheat fields, and to the Grade II-listed Sutton Mill, a lonesome tower that peeps above the distant treeline.

Through borders of mature planted beds and a canopy of trees, the handsome red-brick façade is revealed. At its feet lies a turning circle with parking for several cars. Eight-over-eight double-glazed sash windows provide a balanced fenestration along this westerly aspect, and to one side of the two-storey bay are double doors that serve as the formal entrance. For more information, see the History section.

A long hallway looks deep into the plan and is laid with engineered oak in a chevron pattern. To the left are a drawing room and a games room, both with French windows that open onto the south-facing terrace.

This level has a wonderful flow of principal rooms that connect to each other via the arterial corridors while retaining a sense of autonomy and privacy. Each space has had an aesthetic character bestowed through panelling, wallpaper by House of Hackney and a plethora of Farrow and Ball tones. This individuality creates an interwoven warren of seemingly endless zones.

A large living room occupies the front bay and has doorways to both halls. Beyond lies a sitting room with windows at two aspects. Each of the principal rooms that form the outer walls has fireplaces, three of which are working. Underfloor heating extends throughout the ground level with floors that shift from wide-board oak to travertine.

Opposite the dining room is the kitchen, shaker in style with granite worktops and grey painted cabinets arranged around a central island. An electric Aga and American style fridge and glass-fronted cabinets are at eye level. The kitchen is open to a vast atrium, which operates as a fantastic dining space, with a roof lantern overhead and glazing at both aspects; one a glass wall that looks onto the barn gates.

At the far end of the main hallway, adjoining the atrium, is an orangery with exposed brick walls, shuttered windows at two aspects, and French windows leading onto the southerly terrace and lawns.

The upper level is reached by staircases from the primary entrance hall and the utility. Five bedrooms are arranged across the first floor, and all are en suite. The principal bedroom suite includes a marble-clad bathroom with a free-standing bath.

Heating for the house is via a ground source heat pump with underfloor heating on the lower level and a warm-air jet system for the upper. All en-suites have underfloor heating, and wiring is in place for the future installation of solar panels.

Beyond the atrium, a hallway leads to the courtyard, passing a sixth bedroom on the left and boot room on the right. The courtyard is formed by a series of outbuildings and garages, with tack rooms, stores, a carport with space for three cars, and a gym and sauna. This section has its own entrance from the country lane.

Between two workshops, beside a thatched shed on the far side of the courtyard, is a doorway providing access to walled growing gardens and orchards of around 180 apple trees of various varieties, as well as walnuts, cobs, apricots, figs and pomegranate. Lawns wrap the southern parts of the house, dotted with mature trees and bordered by long paddock grass.  The large barn has in the past been granted planning permission for conversion into a two-bedroom annexe.

Sutton is a picturesque village at the eastern end of Sutton Broad, just south of the market town of Stalham, on the edge of the Norfolk Broads. The local pub is the Sutton Staithe Hotel, set beside the River Ant, and there is a garden centre and a pottery in the village. At nearby Stalham is the popular Museum of the Broads.

To the north of the village is the brilliant, Michelin-recommended Ingham Swan, a 14th-century thatched pub reborn in 2019 as a contemporary restaurant. Also nearby, in the village of Gunton, is the award-winning Gunton Arms and Deer Park. Bought by art collector Ivor Braka in 2009, the converted country house has a restaurant by Stuart and Simone Tattersall, which serves the estate’s own venison and local seafood and is decorated with Braka’s contemporary art collection.

The house is also within ten minutes’ of the sea and the award-winning North Norfolk coast path. There are several excellent beaches along this stretch at Eccles and Sea Palling as well as Mundesley beach, all equally beautiful and free of crowds even in the summer.

Cromer is approximately 18 miles away and is known for its pier, which has summer concerts and a host of food, culture and arts festivals. The town and surrounding area were popular Victorian and Edwardian holiday destinations and retain much of their charm. Cromer has a good selection of galleries, an independent cinema, a golf course and tennis courts. Number 1 Cromer also provides the area’s best fish and chips, owned by Michelin-starred chef Galton Blackiston.

Norwich is around thirty minutes by car and has a wide offering of shops and eateries, and its station runs regular services to London Liverpool Street, which take just under two hours.

The village dates to the Norman period and was recorded in the Domesday Book of 1086. William the Conqueror granted Sutton to Roger Bigot, or Bigod, Earl of Norfolk. The manor later passed to the Earls of Pembroke and through them to the Earl of Abergavenny.

Just outside the village, across the fields from the house, is Sutton Mill, a restored 18th-century windmill which rises a remarkable nine storeys in height, making it the tallest mill in Great Britain. It was built in 1789 on the site of an earlier mill which had burned down, then rebuilt with an extra storey in 1861 when four patent sails were added. The sails drove four sets of grinding stones, more than any similar mill in the country. The mill was struck by lightning in 1861. Remarkably, three staff working inside escaped injury.