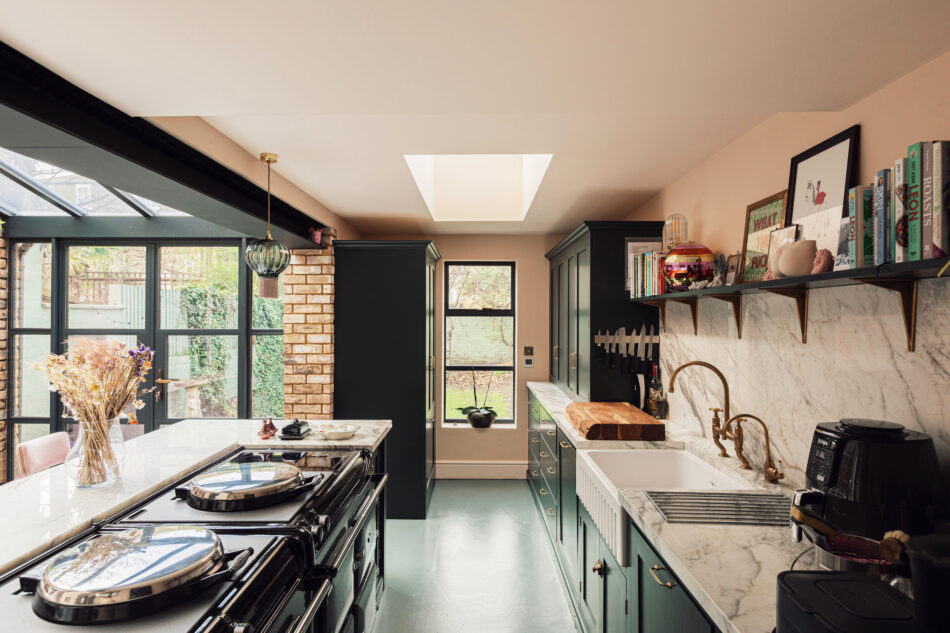 Historic features have been revealed, restored, and celebrated, and a sympathetic and spacious glass-roofed extension to the rear has been introduced

This wonderful three-storey house lies upon St Pauls Crescent, within the Camden Square conservation area where Camden meets the apex of northernmost King’s Cross. Built in the 1860s, the Victorian home has three bedrooms and extends to over 1,600 sq ft internally, with a charming private garden and a particularly exceptional bespoke DeVol kitchen. Great care has gone into the design and renovation, which saw the introduction of a glass-roofed extension to the rear; all interior and exterior paints are by the ecologically-sound colour specialists Lick Paint. Historic features have been revealed, restored, and celebrated, including beautiful Victorian cornicing, box sash windows, chimneypieces and pitch pine floors. Additionally, the house has been fitted with a speaker system throughout to accommodate a Sonos unit.

Camden Square and the surrounding streets, including St Pauls Crescent, were laid out in the early 19th century with most of the houses built by the 1860s; the built form came later than the street layout. St Pauls Church, after which St Pauls Crescent is named, was a fine church built in the centre of Camden Square and completed in 1849 to designs by noted architects Ordish and Johnson. The original church was destroyed during World War II, though a contemporary church hall has been introduced in its place. The area survives today as an excellent example of a mid-Victorian London suburb.

The house is located at the northern section of St Pauls Crescent. Southeast-facing, it enjoys the best of the morning light, with the rear garden receiving the best of the afternoon and evening. Built from classic London stock brick, the façade has banded stucco work at ground level and stucco dressings to the first and second-floor windows. There is a low parapet wall with a decorative cornice to the roof. Set behind a private path, low wall and Buxus hedging, the exterior porch is checkerboard tiled with a high-set deep fanlight above the front door.

Black-painted floorboards run underfoot in the hallway and walls are painted a pretty, muted shade of pink. Views extend along the entire length of the house through to the kitchen and the garden beyond, lending a wonderful sense of space and light. To the right of the plan is the living and dining room, a grand space where the exceptional ornate plasterwork is most evident. Walls are painted in an enveloping shade of dark grey, while ceilings are in soft pink. A tall box sash window set into the bay features a panelled casement and original shutters, and the marble chimneypiece, with its wonderful marquetry design, is fitted for a gas fire. The spacious dining area lies at the rear of this room and leads through a large aperture to steps that descend to the rear of the house.

The kitchen is arguably the most impressive space. Recently designed and completed by DeVol and set within a glass mono-pitch roof extension, the contemporary addition flows effortlessly with the main house, both spatially and in the quality of design. It is comprised of two parts, unified by a heated concrete resin floor. A large, glass-fronted built-in dresser painted in ‘Old Rose’ and a breakfast bar are positioned to the left, with French windows in a Crittall design opening to the garden. To the right are a large island unit and a bank of cupboards with open shelving above. These cupboards are painted in ‘Bakehouse Green’; exquisite slabs of the finest Arabescato marble sit atop. Cupboard ironmongery and brassware are in unlacquered brass, as are the bibcock taps and separate hot water tap. A handsome slate grey five-door Aga complements the surrounding joinery to wondrous effect and a tall Fisher & Paykel fridge/freezer is concealed behind cupboard doors to the rear. Laundry facilities are cleverly housed in understairs cupboards to a similar design.

A study area and guest cloakroom lie on the half landing, while the first floor itself is home to the main bedroom and separate bathroom. The bedroom is positioned to the front of the plan and painted a beautiful deep green. Two full-height sash windows flood the room with light and lend a sense of grandeur, emphasised by the wonderfully tall ceilings and ornate plasterwork. The bathroom is a spacious and indulgent room, with a dramatic clawfoot roll-top bath acting as centrepiece. There is a separate shower enclosure and a pretty ceramic basin in the French style. Original features include a generous panelled cupboard set into one alcove and a slate chimneypiece with a cast-iron inset grate.

The apex of the house is home to two further bedrooms. The larger is currently used as a dressing room with plentiful wardrobing, including cupboards inset with panes of antique foxed glass. The secondary bedroom on this floor can comfortably accommodate a double bed but is currently used as a home fitness studio. An en suite shower room features charming chequerboard tiles by Bert & May.

The garden is seamlessly connected with the kitchen and dining area, and as such acts as an additional living space in the warmer months. A spacious terrace with flagstones underfoot functions as an outdoor seating and dining area, which leads to an immaculate lawn with a mature cherry blossom tree that blooms in early spring. A Royal Tubs electric hot tub offers the opportunity for deep relaxation and is useable all year around. Discreetly positioned at the rear of the garden, it is clad in handsome larch wood and designed as a deep ‘barrel shape’, quietly blending into its natural surroundings.

Transport links are very good, with St Pauls Crescent equidistant between the Underground stations at Camden Town (Northern Line) and Caledonian Road (Piccadilly Line). Camden Road train station is close at hand for services on the East-West London axis, while the house is also well placed for access to King’s Cross St Pancras and the Eurostar terminal.

Please note that all areas, measurements and distances given in these particulars are approximate and rounded. The text, photographs and floor plans are for general guidance only. Inigo has not tested any services, appliances or specific fittings — prospective purchasers are advised to inspect the property themselves. All fixtures, fittings and furniture not specifically itemised within these particulars are deemed removable by the vendor.
St Pauls Crescent — London NW1
Interested? Let’s talk