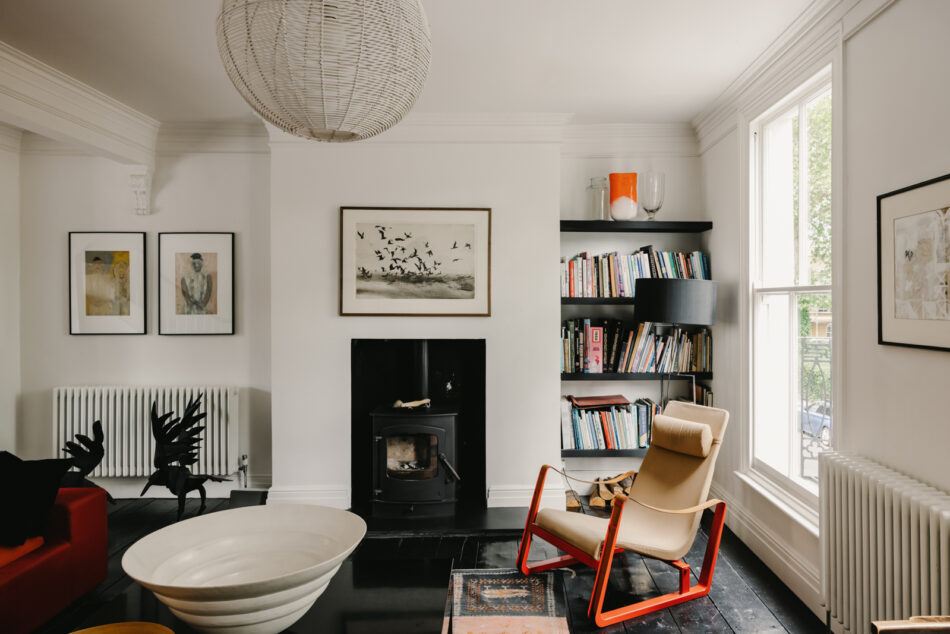 Set over four light-filled levels, the house is a wonderful amalgamation of historical preservation and contemporary utility

This handsome, end-of-terrace, Grade II-listed house with a walled courtyard garden is located in the heart of Whitechapel’s conservation area; it sits upon Sidney Square, one of east London’s most important and historic garden squares. The late-Georgian house has a classic early 19th-century structure of stock brick with coped parapets, with a plain façade that retains full-height box sash windows on the first floor and decorative iron Juliet balconies on both of the upper floors. Set over four light-filled levels and measuring some 1,750 sq ft internally, the house is a wonderful amalgamation of historical preservation and contemporary utility.

Until the beginning of the 19th century, most of the East End was arable land and nurseries. Sidney Square was developed in the 1820s on the site of some of these former fields, which were owned by John Sidney Hawkins (after whom the square is named). It was built for the professional class involved in the incredible growth of the London Docks at the time, with the surrounding streets built up by 1839. An area steeped in history, the square is perhaps best known for the siege of Sidney Street in 1911. This was a gunfight between two Latvian revolutionaries and the army, which was led by a young Winston Churchill, who was Home Secretary at the time.

The house lies on a corner plot at the southern end of Sidney Square, with its entrance at the adjunct on Clark Street. Stone steps ascend from street level to a beautiful neo-classical doorcase with an arched fanlight, which is supported by a slim architrave and recessed fluted half-columns.

A black-gloss front door opens onto the central hallway, where floorboards painted in a similar hue run underfoot. At the end of the hall lies what is currently an artist’s studio and workroom; the current owners have previously used this room as both a bedroom and an additional sitting room. The space retains its delicate original plasterwork and beautiful marble chimneypiece with a cast-iron grate. A generous bathroom is positioned opposite, with foliage coming into view from the garden; there is also a laundry area discreetly concealed behind built-in cabinetry.

On the lower level, a capacious and bright kitchen and dining room have been created from what would have originally been separate service rooms, with a walk-in pantry now cleverly positioned within a one-time vault. Dalsoupel rubber flooring runs underfoot, while smart walnut worksurfaces sit atop contemporary cream cabinetry. There is plentiful storage for crockery and glassware in the form of illuminated open shelving, which runs the length of this floor. A 10-person seating area is positioned to the rear of the room and there is a large central workbench: the space is perfectly designed for cooking and entertaining.

The first floor is given over to a spacious living room with wonderfully high ceilings. Light floods the room through fenestration at both aspects, with two full-height windows framing views of the garden square and companion terrace beyond. There is beautiful plaster cornicing and ornate decorative corbels under the central supporting beam, plus a large wood-burning stove; this is the focal point of the room and provides ample opportunity to ‘withdraw’ to the fireside during winter.

Two bedrooms are positioned at the apex of the house on the second floor, with black carpet laid throughout the entire level. An interconnecting bathroom acts as a contemporary jewel box, with walls and floors encased in colourful Bisazza mosaic tiles. A high skylight is set within the valley roof, allowing copious amounts of light in during the day and providing a spot for stargazing while soaking in the tub before bedtime.

The west-facing walled courtyard garden is exceptionally private and a veritable oasis of calm in the heart of the city. It can be accessed from both the main hallway and via a secure side entrance at street level. The terrace is laid with antique stone setts and is a perfect seating area for entertaining in the warmer months. Generous planting includes jasmine climbers, loquat shrubs, an exotic tree fern and, of particular note, a beautiful and ancient potted Tuscan olive tree. The garden enjoys direct sunshine from late morning to mid-afternoon, while offering shade towards the end of a hot day.

Whitechapel is an incredibly vibrant and centrally located part of east London. A short walk or cycle from both the River Thames and the City, the area offers excellent local amenities. The historic buildings on nearby Whitechapel Road have all been extensively and sensitively restored in recent years in consultation with Historic England, presenting a multifarious union of the finest late 19th-century commercial architecture.

The famed Punjabi restaurant Tayyabs is a short walk away, as is the much-loved bakery Rinkoff and several excellent coffee shops including Aldgate Coffee House. The eclectic George Tavern on Jubilee Street is recommended for drinks and occasional music events, while the Whitechapel Gallery and independent Genesis cinema provide cultural distractions. Nearby Spitalfields and Shoreditch offer further opportunity for dining, entertainment and shopping, with restaurants including Ottolenghi, Cecconi’s and St. John Bread & Wine. Spitalfields Market and the surrounding streets now offer shopping opportunities comparable to the West End.

Transport links are excellent; Whitechapel underground station runs Circle and Hammersmith & City Line services, as well as providing access to the east London branch of the Overground. A Crossrail station for the Elizabeth Line is due to open in 2022, from which trains will run to Bond Street in 10 minutes and Heathrow Airport in 38 minutes.

Please note that all areas, measurements and distances given in these particulars are approximate and rounded. The text, photographs and floor plans are for general guidance only. Inigo has not tested any services, appliances or specific fittings — prospective purchasers are advised to inspect the property themselves. All fixtures, fittings and furniture not specifically itemised within these particulars are deemed removable by the vendor.
Sidney Square — London E1
Interested? Let’s talk