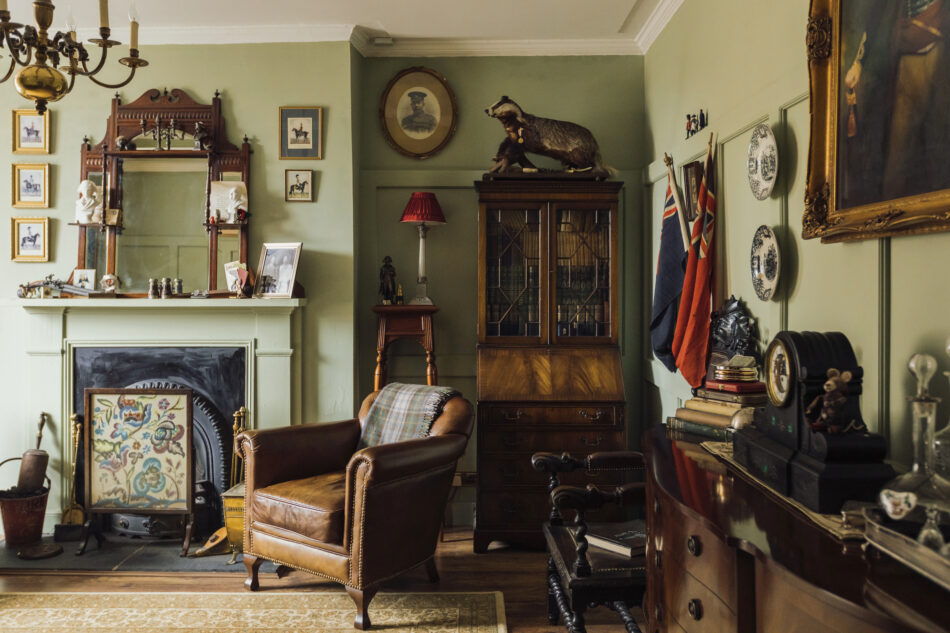 The house has been beautifully designed, to appear as if each room is inhabited by the people of its time

This elegant Grade II-listed house lies with a conservation area upon Ravensdowne, in the coastal market town of Berwick-upon-Tweed in Northumberland; close to both Edinburgh and Newcastle. Originally built in 1760 as a merchant’s house with mid-19th century alterations, the home and its surrounding area have a wonderfully rich history. The house has been meticulously renovated by the current owners, who have retained key historic architectural features and reinstated lost ones to return the house to its original glory. Today, it unfolds over three characterful levels measuring some 1,700 sq ft internally and contains three bedrooms. There are sea views from the upper floors and a private walled garden to the rear.

Berwick-upon-Tweed is the northernmost town in England, situated at the mouth of the River Tweed. For more than 400 years, it was central to historic border wars between England and Scotland so has a strong military history. It is also known for its artistic traditions, with an array of resident artists and illustrators, due in part to its beauty, its proximity to Edinburgh and its good light. L. S. Lowry spent a great deal of time in Berwick and painted many scenes here while staying at the Castle Hotel each summer. The town is bordered by Elizabethan ‘trace italienne’ fortified walls and is known for its three iconic bridges that cross the River Tweed. Ravensdowne itself was originally part of a road built by the Romans that linked England to Scotland and has had several names over the centuries. The road is a small community and the centre of Berwick’s historical civic society.

Originally a merchant’s house thanks to its clear views of the surrounding ramparts and the North Sea, the house was later used as accommodation for senior offices from the Scots Guards who were stationed at the neighbouring barracks. Stone-built in ashlar with quoins, it has a locally accurate terracotta pantile roof and restored cast-iron guttering to the exterior. The façade was meticulously revealed and restored in recent years, with repairs completed in lime mortar, while failing chimney stacks were removed and rebuilt in reclaimed local bricks. All sash windows have been overhauled and restored. Finished to a similarly meticulous standard internally, there are cast-iron radiators and brass toggle light switches and sockets in all rooms; original joinery, cupboards and architectural hardware feature throughout. Floors on all levels are oak, with hand chipped flagstones in the hall and kitchen.

Ravensdowne is a locally important street; Georgian in character and lined with grand houses, it was voted by The Times as one of the smartest streets in the United Kingdom. The house lies directly adjacent to Berwick Museum and Art Gallery and Nicholas Hawksmoor’s Barracks and Main Guard, Britain’s earliest barracks building.

Entry is through a recessed stone porch set back from the street and to a private hallway that links directly to the rear garden and the original stripped 18th-century oak staircase ahead. Handsome Georgian redwood panelling runs along one wall, salvaged from a church closure. To the front of the plan is the sitting room, beautifully decorated and panelled throughout. There are military undertones here – a nod to the former inhabitants. A restored chimneypiece and working fire ground the room, and original shutters afford privacy from the street. Beautiful cornicing has also been restored in this and all principal rooms.

To the rear of the plan is the spacious kitchen, with painted wooden cupboards and oak worktops. The brick wall of the original Georgian exterior has been revealed next to the cleverly concealed original scullery. Half-glazed French windows lead to the garden and allow light to flood the room, while a seating area allows for cosy kitchen suppers or simply enjoyment of the verdant garden views.

On the first-floor hallway is a storage cupboard, formerly the dumb waiter and now decommissioned. The main bedroom, currently used as a living room, enjoys views of the historic barracks, green ramparts and the sea beyond. The room has a beautiful marbleized chimneypiece and deep original cupboards set into the alcoves. There is also particularly excellent plasterwork decoration to the ceiling, while a study is discretely set to one side. Two connected ancillary spaces, currently used as dressing rooms, lead to the main bathroom at the rear of the plan. This room is wonderfully light and painted pale blue, with a cast-iron bathtub and brassware by Lefroy Brooks. Pretty views extend over the rooftops to the town hall clock tower.

The apex of the house contains two further bedrooms, one with its own en suite shower room. Uninterrupted views extend to the green ramparts and the North Sea in the distance.

The private west-facing garden lies to the rear of the house, where a spacious stone terrace leads to a lawn surrounded with maturing shrubs including roses, lavender and rosemary. An additional seating area is positioned at the back of the garden; perfect for evening drinks watching the sunset. The grand garden wall originally separated the house from the adjacent military hospital; it is made from local stone and retains military marking set within.

For adventures in nature further afield, there are numerous walks along the River Tweed and beyond. Wonderful local beaches include Fisherman’s Haven Beach, Cocklawburn Beach, and the beachfront and lighthouse at Berwick-upon-Tweed itself. A five-minute walk onto the ramparts leads to walks around the historic town walls and to walks that extend for miles, with gorgeous views of the bridges, river and surrounding landscape. The Lowry Trail, named after the famed painter, takes in many of the favoured local sights.

There are excellent amenities within Berwick itself, just a five-minute walk from Ravensdowne, including a great selection of independent bakers, butchers and fishmongers. Eateries include The Mule on Rouge and The Barrels Alehouse pub, alongside microbrewery The Curfew and coffee roasters Northern Edge. Audela restaurant, Atelier wine bar and Indian restaurant Amran’s are also of particular note. There are brilliant independent bookstores and antique shops along Bridge Street. Live music events take place at The Barrels and Radio Rooms, while the Maltings theatre and arts institution acts as a cultural centre. Throughout the year there are food festivals, historic festivals and literary festivals. Important local landmarks and day-out destinations include Holy Island, Lindisfarne Castle and Bamburgh Castle, plus stately homes such as Paxton House, Mandeston House and Chillingham Castle.

There is a good selection of state primary, middle and senior schools in Berwick, including Berwick Academy; Longridge Towers is an excellent co-ed independent school for all ages a couple of miles outside neighbouring Norham.

Berwick-upon-Tweed is only 45 minutes by train to the centre of both Edinburgh and Newcastle upon Tyne, while London Kings Cross can be reached in around 3 and half hours. The train station is a 10-minute walk from Ravensdowne. The A1 is a short drive away and acts as the main link by road to Newcastle and Edinburgh. Additionally, both Edinburgh and Newcastle International airports offer routes to most European cities and holiday destinations, as well as London Heathrow and other southern English airports.

Please note that all areas, measurements and distances given in these particulars are approximate and rounded. The text, photographs and floor plans are for general guidance only. Inigo has not tested any services, appliances or specific fittings — prospective purchasers are advised to inspect the property themselves. All fixtures, fittings and furniture not specifically itemised within these particulars are deemed removable by the vendor.
Ravensdowne — Berwick-upon-Tweed, Northumberland
Interested? Let’s talk