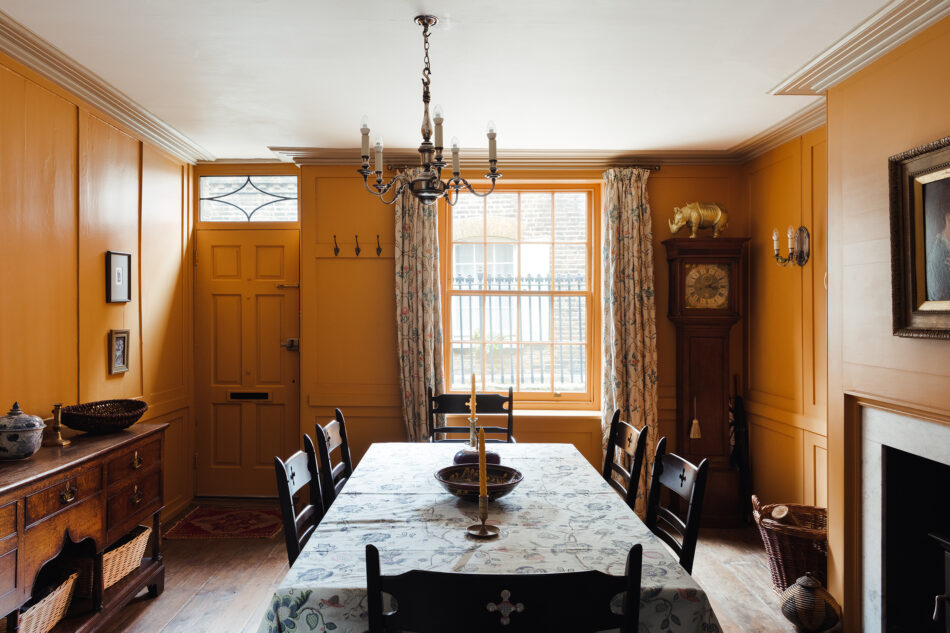 Two south-facing roof terraces look out over the city, with wonderful views of Christ Church Spitalfields

This wonderful Grade II-listed home can be found in Puma Court, a unique and historic pedestrian passageway in the heart of Spitalfields. Constructed circa 1760 with additions in approximately 1830, it is arranged over four floors and extends over 1600 sq ft. A true labour of love, the house has been sensitively restored by its current owners over the past two decades. It is steeped in the history of the East End and is something of a palimpsest of its many uses over time.

The exact history of Puma Court’s construction is unknown, with the first concrete evidence of its existence found in “A Large and Accurate Map of the City of London” (1676) by Ogliby and Morgan, when it was known as Red Lion Court. It is truly in the heart of Spitalfields, opposite the eastern perimeter of Spitalfields Market and on the western edge of the Brick Lane and Fournier Street Conservation Area (part of the wider Spitalfields Neighbourhood Conservation Area). Spitalfields has been home to a functioning market for over 350 years; licensed by King Charles I in 1638, it has since become renowned for its terraces of Huguenot cottages and lively atmosphere.

This house dates from the 1760s and has an incredibly rich history having been used variously over the centuries as a milliner, a weaving workshop and other ancillary industries associated with the East End garment trade. To the west is Commercial Street, with Spitalfields Market opposite. To the east, Wilkes Street and Brick Lane. Less than 100 metres to the south is Nicholas Hawksmoor’s Christ Church Spitalfields; Grade I-listed, the building represents the pinnacle of the English baroque. Views of the church spire can be seen from the two roof terraces at the rear of the house.

Entry on the ground floor of Puma Court leads directly to a reception room that extends the full width of the house. It is currently arranged as a dining room and has a charming wood-burning stove. The building’s history is immediately apparent here: brass fittings in the original hardwood floorboards evidence its 19th-century function as a weaving workshop, and a shadow in the ceiling indicates where the old staircase used to be. This was replaced c1830 by a box spiral staircase, in situ today. The basement below is home to a wood-store for the stove, lined with tiles believed to date from the late 18th century. The main room of the basement is currently used for storage, it is dry and warm so could easily be reimagined and serve an alternative purpose .

To the rear of the ground floor are the elegantly appointed bathroom and kitchen. The kitchen has recently been refitted with Plain English cabinetry, although antique features such as the large Belfast sink (believed to date from the late 19th or early 20th century) have been carefully preserved. A recessed arch contains shelving; the arch itself is believed to have held a display case at a time when the ground floor was a ribbon shop for milliners. To the left of the arch is a glazed pocket door in the American federalist style. Skylights bathe the space in light and unique vents, which open onto the first-floor terrace, allow for proper circulation of air.

Upstairs, at the front of the first-floor plan is a room extending the full width of the house, and to the rear a smaller room with hand-painted floral walls and access to one of the two roof terraces. Currently, the rooms are arranged as a reception and study. However, they could easily be reconfigured as a main bedroom suite or two adjoining bedrooms. Both have wood panelling reconstructed and restored by renowned local artisan Matt Whittle.

On the second floor is the main bedroom at the front, clad in the same stylish wood panelling. To the rear is a large shower room with Miele laundry appliances. Ascent to the third floor leads to a large single room currently arranged as a home office/cinema; however, this too could be reconfigured as a further bedroom. Access to the third-floor terrace is from the stairs, via a wonderfully romantic small door redolent of Alice in Wonderland.

The house has two south-facing roof terraces. These are a haven of tranquillity and benefit from a wonderful view of the aforementioned Christ Church Spitalfields.

The neighbourhood surrounding Puma Court is renowned for its vibrant cultural life. At the turn of the century, cheap studio space and restaurants like St. John Bread and Wine, Mark Hix’s Tramshed and the Golden Hart pub attracted the Young British Artists; the area has enjoyed almost unparalleled popularity ever since. The art galleries at Truman Brewery, Modern Art, Maureen Paley and Raven Row are all within walking distance of Puma Court. The restaurants, bars and pubs in Shoreditch rival any neighbourhood in the capital and include St. John, Lyles, Brat and Clove Club, as well as more casual offerings at Brawn and Rochelle Canteen.

The city’s financial district is less than ten minutes walk from Puma Court; as are the stations at Liverpool Street, Aldgate East, Aldgate and Shoreditch, offering both Underground, Overground and National Rail services.

Please note that all areas, measurements and distances given in these particulars are approximate and rounded. The text, photographs and floor plans are for general guidance only. Inigo has not tested any services, appliances or specific fittings — prospective purchasers are advised to inspect the property themselves. All fixtures, fittings and furniture not specifically itemised within these particulars are deemed removable by the vendor.
Puma Court — London E1
Interested? Let’s talk