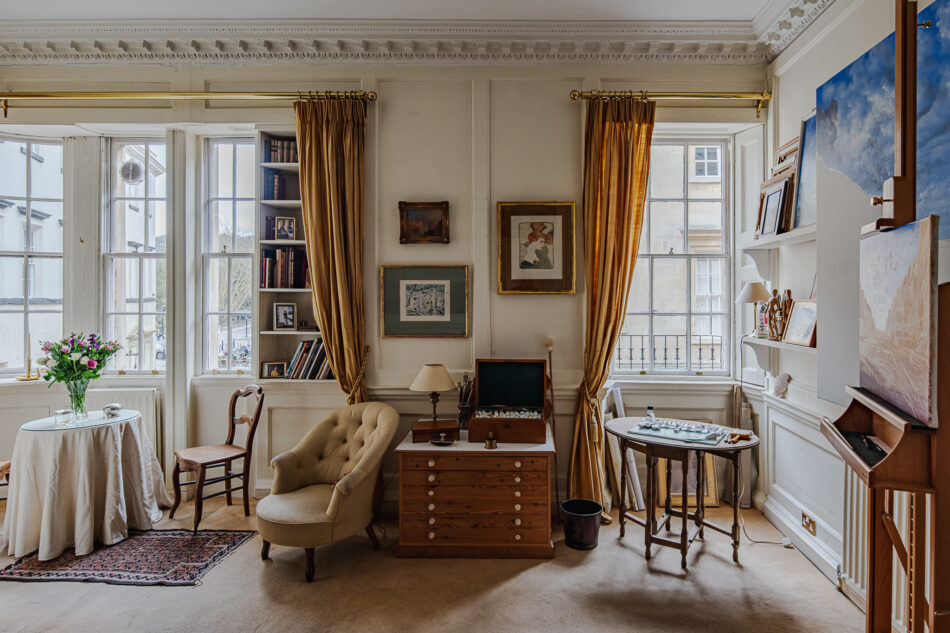 Bowed sash windows curve around the living room, framing views of the city streets below

This charming two-bedroom apartment is positioned on the first floor of Hamilton House, a handsome Grade II-listed detached townhouse in the heart of Bath’s city centre. Located on North Parade Buildings, a sought-after historic terrace built circa 1742 the apartment retains its Georgian features and is in a fantastic location just minutes from Bath Abbey, Bath Spa train station, Parade Gardens and the independent shops, restaurants and cafes of the city centre.

North Parade Buildings is a quiet and peaceful pedestrianised street steeped in the Georgian grandeur for which Bath is so renowned. It is characterised by a terrace of townhouses, several of which have been designated as Grade I-listed. This particular apartment, one of nine in Hamilton House, is located on the first floor and has arguably the finest views in the building. Curved, bowed sash windows which extend across two aspects from the sitting room, with views reaching as far as Sham Castle, a Grade II*-listed folly on Claverton Down. Uniquely situated in a hollow in the hills, the surrounding Somerset countryside is an incredible backdrop to the city.

Bath is the only city in Britain to achieve Unesco World Heritage status, which continues to be vehemently protected. Founded in the 1st century AD by the Romans, who famously used the natural hot springs as a thermal spa, it became an important centre for the wool industry in the Middle Ages. In the 18th century, under George III, it developed into an elegant city with neoclassical Palladian buildings.

Entry to Hamilton House is via a central hallway built to impressive Georgian proportions, with soaring ceilings and ornate cornicing. A grand sweeping staircase ascends to the first floor, where the apartment can be found on the westerly wing of the building (thus enjoying a wonderful amount of natural light throughout the course of the day). A useful storage cupboard is located on the split-level landing in the central stairwell and there is further dedicated storage space in the basement of the building.

An exquisite living room extends across two thirds of the plan, replete with beautifully retained architectural detailing. High ceilings, combined with original cornicing and wall panelling, create a sense of space and volume, and elegant bowed sash windows curve around the corner of the room. These allow fantastic amounts of natural light to flood in and create the perfect environment in which to sit and enjoy a morning coffee, watching city life unfold on the streets below. A kitchen adjoins the living room; a charming space with a slanted sash window that also frames views of the street.

The main bedroom, coloured a deep red, exudes a sense of calm. Wardrobes provide generous storage space and a large shuttered sash window frames elevated views towards Abbey Green. A second bedroom, currently used as a study, is positioned on the opposite side of the plan and looks out onto North Parade Buildings. This room has beautiful bookcases and storage cupboards built into the recesses. The bathroom sits centrally and also benefits from its own window and a view onto North Parade Passage (formerly Lilliput Alley).

North Parade Buildings is exceptionally well-positioned for access to Bath city centre and Bath Abbey, a former Benedictine monastery founded in the 7th century. The city harbours a strong community of independent retailers, coffee shops and eateries with Colonna and Small’s, Corkage, LandRace Bakery, Beckford Bottle Shop, Henry’s Restaurant and the weekly Farmer’s Market ranking favourably among local residents. Oak, a popular independent restaurant, is opposite the apartment, alongside Sally Lunn’s Eating House, one of the oldest houses in Bath and home to the original Bath Bunn, a regional baked speciality.

Parade Gardens are a two minute walk from the apartment and enjoy fine views over Pulteney Bridge and the weir, built in the early 19th century. Concerts are held in the bandstand throughout the summer months. The area is renowned for the quality of its private and state schooling, with institutions including Royal High, Royal High Junior School, Kingswood School, Kingswood Preparatory School, St Stephens’ Primary School and King Edward, Prior Park College.

Transport links from North Parade Buildings are excellent, with Bath Spa train station a five minute walk away, providing a direct line to London Paddington in under 1.5 hours. The M4 motorway sits just on the edge of the city centre and is reachable by car in 15 minutes.

Please note that all areas, measurements and distances given in these particulars are approximate and rounded. The text, photographs and floor plans are for general guidance only. Inigo has not tested any services, appliances or specific fittings — prospective purchasers are advised to inspect the property themselves. All fixtures, fittings and furniture not specifically itemised within these particulars are deemed removable by the vendor.
North Parade Buildings — Bath, Somerset
Interested? Let’s talk