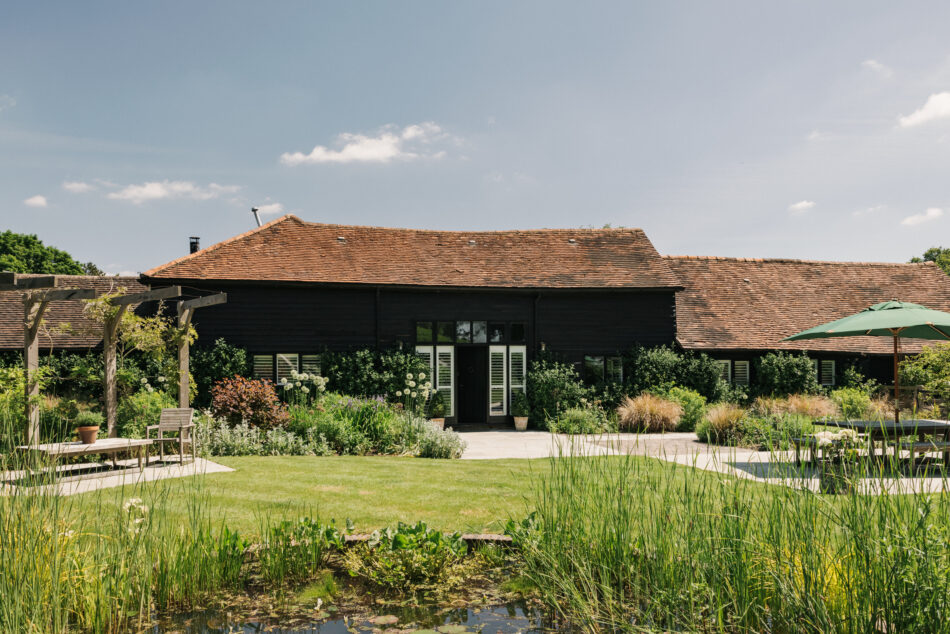 The garden is a private and verdant haven filled with herbaceous perennials and flowering shrubs, surrounded by native mixed hedges and home to an abundance of wildlife

Kings Ash Barn is a wonderful, expansive four-bedroom barn conversion surrounded by beautifully planted naturalistic gardens. Originally constructed c.1750, the barn has been carefully restored by the current owners to create a home fit for contemporary living, with gardens designed by a multi-award-winning designer. The owners have also drawn up plans to convert the garage, subject to the requisite permissions.

Situated high in the Chiltern Hills AONB, Kings Ash Barn – which is actually composed of five connected buildings – has been a working barn since the 18th century. It was converted into a home in the 1980s, when the separate buildings were united, and the current owners have since done large amounts of work to celebrate the plethora of original features. For example, an original flint wall on the first floor has been carefully revealed and repointed. The main exposed beam in the living room was taken from the Royal Navy’s last wooden warship, the HMS Impregnable (previously called the HMS Howe). The ship was broken up in the early 20th century and used also in the construction of Liberty London.

Creating the beautiful gardens was also a priority for the current owners. They commissioned multi-award-winning designer Jilayne Rickards to create a sanctuary for wildlife and people alike; a relaxing haven with plenty of space for entertaining. Planted in 2017, the gardens are now mature and teeming with life and colour.

In front of the house is a generous driveway with space to park four cars. A path winds through the south-facing front garden to a tall glazed front door, which opens into a dining room with oak floors and high vaulted ceilings intersected with exposed beams.

The dining room leads through to the bespoke Martin Moore fitted kitchen, replete with a generous central island and a warming Aga. The light-filled room has high ceilings and a wonderful sense of volume. A door leads through into a useful utility room, while a glazed stable door opens to the private east-facing courtyard garden. There is also a protected kitchen garden, planted with herbs and other plants that attract pollinators such as lavender, rosemary, fennel, lemon verbena, herbs and cut flowers.

On the other side of the house is the living room, thoughtfully arranged around a wood-burning stove. Another glazed door opens onto the second garden; this wilder orchard is designed to be lower-maintenance and has been planted with fruit trees, native hedges, magnolia and shrubs for shade. It is also a haven for local birds.

A staircase ascends to the first floor, which is home to a bedroom with narrow white-painted floorboards underfoot and original mullioned internal windows that overlook the living room below. Three further bedrooms are accessed from the living room via a hallway with an exposed flint wall. At the end of the corridor is the main bedroom with an en suite bathroom. From here, a set of stairs lead to a mezzanine level; currently used as a studio space, this could easily be reconfigured as another bedroom. There are wooden floors and high ceilings with lovely revealed beams.

The west-facing main garden is composed of meandering borders that mimic the surrounding hills and tree canopies, connected by a large area of lawn. Planted for year-round colour and interest, herbaceous perennials and flowering shrubs sit beside a backdrop of laurel, whilst native mixed hedges enclose the space, creating a private and verdant haven. The garden has a beautiful wildlife pond, which is home to a mixture of native and exotic plants, as well as frogs, newts, and dragonflies that can be viewed from a protruding deck. There are two seated areas; a paved area in the sun, and a wisteria-covered, shaded pergola.

There are numerous walks easily accessible from Kings Ash Barn including the ancient Ridgeway National Trail, an 85-mile walking route from Avebury to Ivinghoe, which passes along Wendover High Street and very close to the house. There are 33 further miles of public rights of way and bridleways that dissect the parish, some of which lead to the open chalk downland of Coombe Hill and to Wendover Woods.

Kings Ash Barn is nestled in the Chilterns Area of Natural Beauty, surrounded by extensive footpaths through farmland and woodland, and is popular with horse riders, cyclists and walkers. There are numerous pubs nearby, such as The Old Swan at Swan Bottom, which is just a mile away. The area has a number of highly regarded state and independent primary and secondary schools including Chesham Grammar School, Dr Challoners High School, The Beacon School and Heatherton House. The local village, The Lee, is wonderfully picturesque and often features as a location on the much-loved television show Midsomer Murders.

The nearest village to Kings Ash Barn is Wendover, which is only 2 ½ miles away and is home to plenty of restaurants, delis and pubs. It can be accessed without using the A413 and Wendover station runs trains to London Marylebone in around 55 minutes. Around 10 minutes drive away is Great Missenden; the home of Roald Dahl, it is a delightful village with good pubs and cafes, a farm shop at Peterley Farm, and a fantastic nursery and display gardens at The Plant Specialist. Chesham is also a short drive away (around 15 minutes) and has a twice-weekly market for local produce, a pedestrianised high street with a number of independent retailers, and a large Waitrose.

Great Missenden station runs twice-hourly Chiltern Line services to London Marylebone, taking approximately 50 minutes. Despite its rural setting, the house is just 10 minutes from Zone 9 of the London Underground at Chesham, which is the last stop on the Metropolitan Line. The M40, M4, M25 and M1 are all within easy reach, as is Heathrow Airport which is around 30 minutes drive.

Please note that all areas, measurements and distances given in these particulars are approximate and rounded. The text, photographs and floor plans are for general guidance only. Inigo has not tested any services, appliances or specific fittings — prospective purchasers are advised to inspect the property themselves. All fixtures, fittings and furniture not specifically itemised within these particulars are deemed removable by the vendor.
Kings Ash Barn — Great Missenden, Buckinghamshire
Interested? Let’s talk