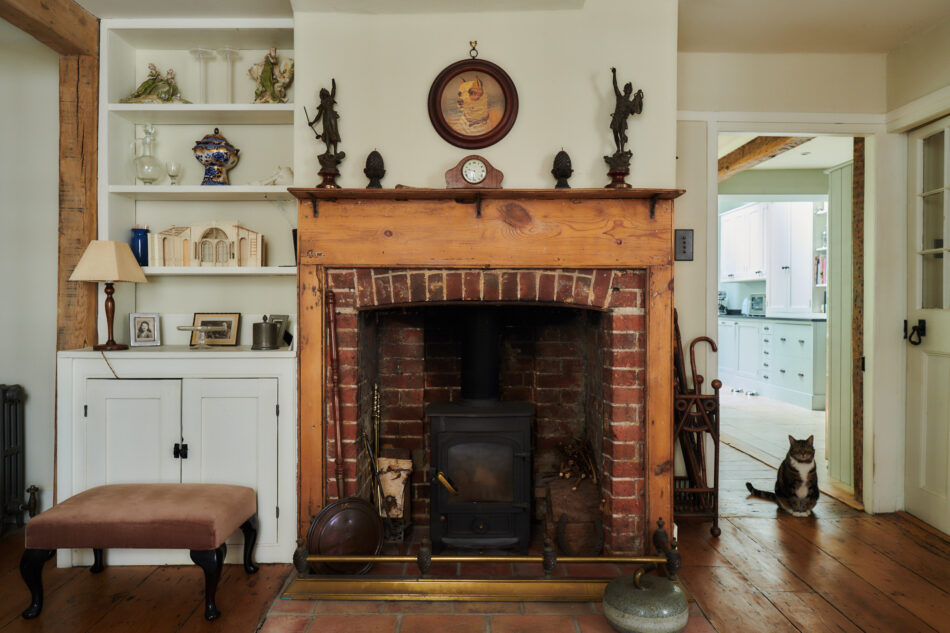 This wonderful double-fronted Grade II-listed house is situated on Keere Street in the historic centre of Lewes, East Sussex. Originally dating from 1698, the house was refaced in the Georgian period with the current brick façade of symmetrical proportions and classical elements still seen today. Expanding to some 1,879 sq ft with four double bedrooms, a study area, and a second sitting room, the house also has a charming and mature garden at the rear.

Also known as Scare Hill, Keere Street is a delightful cobbled pedestrianised road off the High Street leading down to Southover Grange. Lying just outside of the old town wall, which forms the boundary for properties on the eastern side of the street, many of the buildings along the road were built between the 17th and 19th centuries and are listed because of their architectural significance. Legend says that the Prince of Wales (who went on to become King George IV) once raced a coach and four horses down the street to win a wager. For more information, please see the History section.

Mounted with a classical pediment, the entryway to the house leads directly into an expansive open-plan drawing room. Finished in neutral Farrow and Ball shades throughout, complemented by exposed beams, with elm floorboards and an original fireplace, this room overlooks the quiet street; early Georgian sash windows with original glass allow the room to be flooded with light. Next to the drawing room sits an open-plan dining area with cast-iron radiators and fine panelling.

To the rear of the house is a bright and charming breakfast room overlooking the garden. This space has expanses of glazing with a large bay window opening to a patio. A wood burning stove warms the room in cooler months. Next to the breakfast room is the kitchen with hand-built cabinetry and honed black granite worksurfaces. A butler’s sink, range cooker, and exposed beams complete the room.

Also on the ground floor, there is a cloakroom with WC and hand-basin and tiling by Fired Earth.

Downstairs, on the lower-ground floor, a second sitting room is finished in neutral tones and has a window overlooking the street. This could easily be configured into a fifth bedroom.

On the first floor, a large bedroom sits at the front of the house, with period fitted wardrobes and a later Victorian fireplace; another double bedroom sits adjacent. To the rear of the home is a charming fourth bedroom, which is currently used as an elegant reading room, with expansive banks of bookcases, an original fireplace and a bay window overlooking the treetops. There is also a beautiful family bathroom on this level, with an antique French bath and Lefroy Brooks sanitary ware throughout. Chequerboard tiles line the floor, and the room has been finished with exposed beams; powder blue walls echo those in the kitchen.

The second floor of the house is home to a spacious primary bedroom suite. The rooms have more exposed beams and dual-aspect windows over the front and rear of the house. Occupying almost the whole floor, the space has beautiful elm floorboards and useful storage areas. A bright shower room with a large walk-in shower sits next to a study area at the top of the stairs, peacefully tucked away from the rest of the house.

A beautifully manicured, well-established garden is flanked by a quiet patio and flowering beds. Rare for the area, the garden is not overlooked and has a peaceful lawn, decked area and charming summerhouse.

The name Lewes derives from the Saxon word ‘hluews’, which means slopes or hills. Founded in the 6th century, Saxon Lewes was a stronghold and was originally protected by a ditch with earth ramparts and later in the Middle Ages by a stone wall. More than a fortress, the area was a bustling town with weekly markets and a charter granted by King Stephen.

Lewes was later the home to the Anne of Cleves House (built with stone from a dissolved priory); it was one of many homes Henry VIII gave to Anne shortly after their divorce (although Anne never actually lived there). The building still stands today on Southover High Street.

The area saw little change and prospered as a small market town until the 19th century. The arrival of the railways in 1846 opened Lewes to commerce as goods were now more accessible to trade via rail or water. Several improvements were undertaken in 19th-century Lewes, brought on by a body of people called Improvement Commissioners, who repaved, cleaned and lit the town streets with gas lamps.

In the 20th century, Lewes prospered as a small residential town in its own right, with its outstanding Georgian and Victorian architecture making up a warren of desirable streets for those looking to live both in the town and close to the capital.