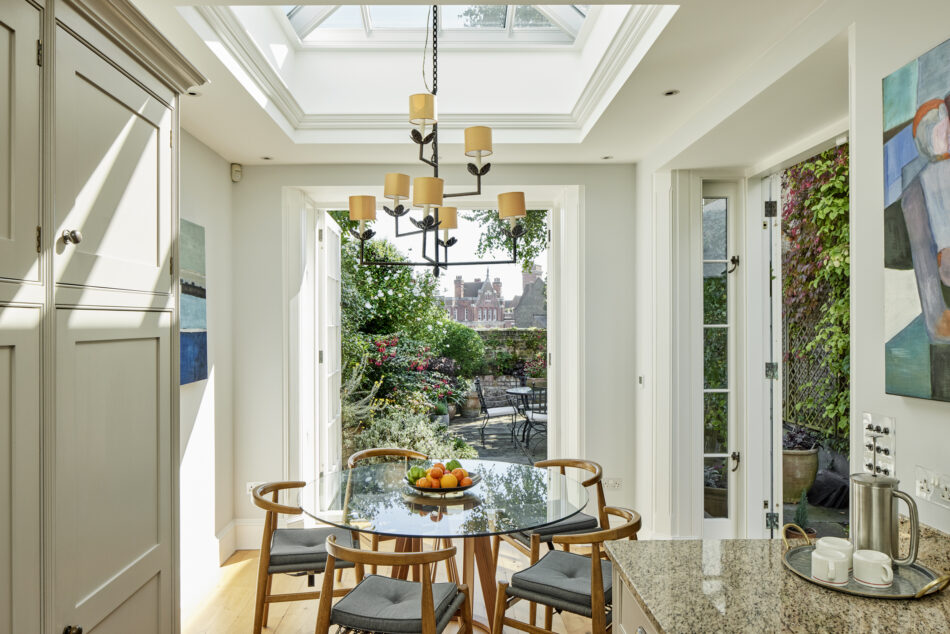 This charming Grade II-listed four-bedroom Regency house lies on a quiet lane in the centre of Hampstead. It was built in 1816 and has, in recent years, been the subject of a refined and sensitive refurbishment across its three main storeys. A beautifully planted and tranquil paved garden wraps the side and rear of the house, while excellent views of London are enjoyed from its upper levels and an unofficial decked roof terrace.

Holly Place forms part of a symmetrical terrace grouped around St Mary’s Church, with deep front gardens that set the houses back from the quiet lane linking Mount Vernon with Church Row. St Mary’s was the first Catholic church to be built in Hampstead after the English Reformation of the 16th century, completed in less than a year and opening its doors to worshippers for the first time in August 1816. No taller than the houses on either side, the church’s distinctive façade, with bell tower and statue of Virgin and Child, was designed by architect William Wardell as the first addition to the original building at the time the law was changed to allow bells to be rung from Catholic churches in 1852.

The house rests behind a large paved front garden, which is centred around a beautiful Monterey pine and accessed via gated entry. The wonderfully modest white-painted façade consists of a single column of fenestration: an arched French window with a Juliet balcony set between sash windows on the upper and lower floors.

An arched transom above the front door invites light into a long entrance hall with panelled walls. Wide-board pine flooring extends along the corridor and into a double reception on the right, where each room has a gas fire with a slate hearth and honed marble surround. Light pours in from both aspects, through the wide sash window at the front and French doors in the piano room that open to a wide garden to the side of the plan.

Within the corridor are a utility room and a separate guest WC. There is also a door with steps down to a tanked cellar for storage. Beyond lies an expansive extended portion of the house, with a reception area leading down to the kitchen and dining room. Roof lanterns fill the space with natural light and huge casement windows above the granite worktops look onto the elegant arched fenestration of the neighbouring church. The kitchen is by Smallbone with a Lacanche range cooker; the flooring is a rich solid oak. At the rear, French windows open at two aspects to blur the division between dining space and garden.

The main bedroom is situated on the first floor, where panelled walls continue from the stairwell to combine with oak flooring and intricate cornicing. A single arched aperture with double casement windows opens to a Juliet balcony. To one side of the bed is a concealed door that leads past a walk-in wardrobe to the shower room. On a split level beneath the main bedroom lies a smaller bedroom at the rear with its own bathroom. There are two further double bedrooms on the second floor, which share a Jack-and-Jill shower room.

From the second floor landing, a set of electric stairs descends from the ceiling to an unofficial timber decked roof terrace with incredible views of London and Hampstead in every direction.

Both front and rear gardens are beautifully planted, with a wonderful pine tree at the front and silver birch at the back. They are paved throughout in flagstone and wrap around the extended portion of the house, with elevated views to Hampstead at the rear. The rear garden is an incredibly private space; walls of greenery run along both sides and it receives excellent light throughout the day from the east and south.

The house is situated in a particularly quiet spot at the northern end of Holly Walk. However, it is within just a few minutes walk of the delights that make Hampstead one of the most sought-after locations in London. Hampstead High Street offer a plethora of boutiques, cafes and eateries, including Jin Kichi, Oddono’s gelateria, Ginger & White, Gail’s and the famous Hampstead Crêperie. There are several charming pubs nearby including The Horseshoe, The Flask and The Hollybush, while the open expanse of Hampstead Heath is just minutes away. Some of London’s best independent schools can be reached on foot.

Hampstead station (Northern Line) is a four-minute walk from the house.

Please note that all areas, measurements and distances given in these particulars are approximate and rounded. The text, photographs and floor plans are for general guidance only. Inigo has not tested any services, appliances or specific fittings — prospective purchasers are advised to inspect the property themselves. All fixtures, fittings and furniture not specifically itemised within these particulars are deemed removable by the vendor.
Holly Place — London NW3
Interested? Let’s talk