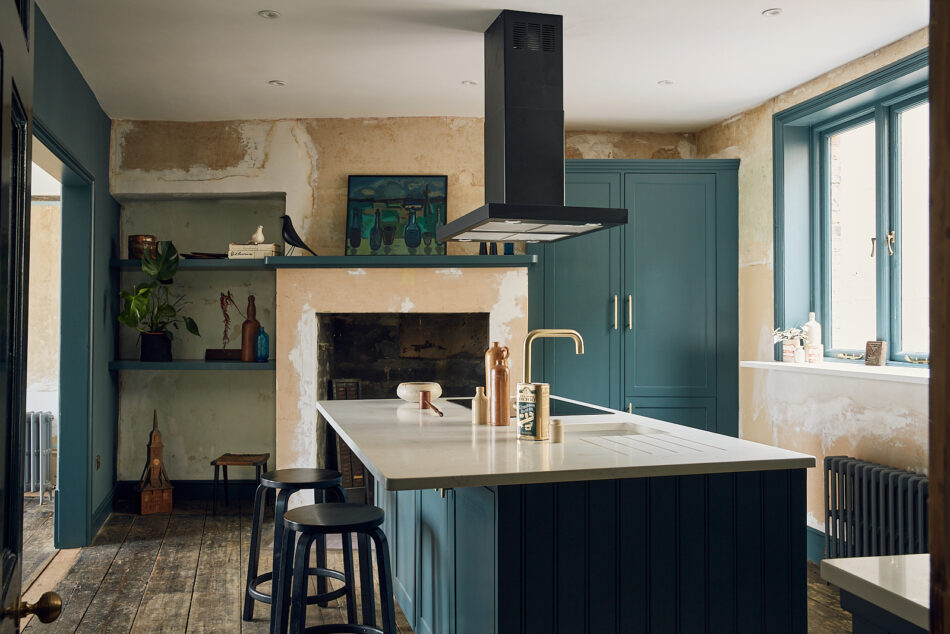 Details from the home's many lives have been lovingly preserved, including unique scrawled pencil marks from the 1970s

This beautiful Grade II-listed Georgian townhouse sits on Hawley Square in Margate, Kent. Two floors of living space encompass three bedrooms, a wonderfully private roof terrace, and an expansive downstairs home office with a separate entrance. The house was built in the late 1830s and extends over 2,600 sq ft internally (not including the basement), making for an incredible home. Recently restored by the current owners in collaboration with Sam Causer Studio, it has been returned to its former glory with its period details carefully reinstated. Original details have been preserved to create a home that celebrates the building’s history, while the recent updates ensure its suitability for modern life.

Positioned in Margate’s Conservation Area on the celebrated Hawley Square, the house is in a brilliant position. It is a stone’s throw from the beach, the Theatre Royal and the esteemed Turner Contemporary gallery. It is surrounded by other townhouses of a similar era, such as the adjoining house (built around 1830) and a unique crenellated castle-like building opposite.

It has had many lives and uses over the years. In 1840, it was occupied by a blacksmith named John Sitpard Witherden, who likely operated from a shed at the rear of the garden. It is thought that he invested in changes to the building to accommodate access for horses and other traders in order to facilitate more trade. Then came a variety of occupiers, from a cabinetmaker to an auctioneer. In 1907 it became the headquarters of the 4th Battalion of the Buffs (East Kent Regiment). It is likely that they updated the building’s appearance to its present-day aspect, transforming the traditional Georgian façade into the rusticated stonework and metal gates we see now. The building remained in military use until the 1970s, when Thanet District Council moved in.

Entry is through metal gates into an internal courtyard. To the right is an arched, green-painted front door, which opens to a hallway and staircase that leads to the upstairs living quarters. A pair of glazed doors provide alternative access to the ground floor studio space. A large space, which could be used residentially or as an office, lies at the rear of the building behind a set of Crittall-style doors, lit from above through four large skylights. At the front of the building is a separate meeting room, with striking stone window frames. There is a WC on this floor, as well as a ladder descending into a sizeable basement with high ceilings, currently used as storage.

A staircase with added spindles and side nosing has been reconditioned with the addition of missing components and joinery designed to match the surviving originals. This leads to the first floor and the open-plan kitchen, dining and living room towards the front of the house. The bespoke kitchen is new and has marble worktops, blue-painted cabinetry and a row of windows that overlook a generous roof terrace. There is a wide marble windowsill that doubles as a breakfast bar or further work surface. There is also a fireplace to one side, with deep inbuilt shelves in its alcove.

The living room is lit through two striking floor-to-ceiling sash windows and also has its original fireplace. A smaller area lies beyond which would make for a lovely study or snug. Both rooms overlook the greenery of Hawley Square. There is also a bathroom on this floor and a utility room which houses the new hot water tank. Sliding glazed doors open from the corridor to the generous roof terrace; this wonderfully private space is not overlooked and has ample room for a seating area, as well as numerous planters.

Upstairs are the three double bedrooms and a shared shower room. All the bedrooms are finished in a similar style, with a mixture of painted and bare-plastered walls. Original floorboards run underfoot throughout, and stripped-back wood panelling surrounds the large sash windows. A rich patina creates a uniquely warm atmosphere throughout the bedrooms.

As well as its expansive south-facing terrace, the house has access to the green and verdant Hawley Square, framed by leafy mature trees. It is a stone’s throw from the beach and numerous walks such as The Viking Coastal Trail, an 8-mile walk that links the towns of Ramsgate, Broadstairs and Margate along Kent’s cliffs and beaches.

Hawley Square is an incredibly central square in the seaside town of Margate. Known for its creative community, the town is home to the Turner Contemporary. This is a brilliant contemporary arts space with far-reaching views over the sea, named after landscape painter J. M. W. Turner who went to school in Margate and returned throughout his life. Margate is also famous for Dreamland; a vintage theme park that has rides, musical acts and a drive-in cinema. There are numerous restaurants including Angela’s, a sustainable seafood bistro, and Hantverk & Found. Margate is home to independent shops such as Werkhaus, Ruskin and the cosy Margate Bookshop.

The nearby coastal towns of Broadstairs and Ramsgate are also well known for their array of pubs, restaurants and independent shops; as are Herne Bay and Whitstable, which are slightly further afield.

The house has excellent links to London, with trains from Margate to London St Pancras in under an hour and a half, or London Victoria in one hour and 45 minutes. There are trains to Canterbury in half an hour, which is also a short drive away.

Please note that all areas, measurements and distances given in these particulars are approximate and rounded. The text, photographs and floor plans are for general guidance only. Inigo has not tested any services, appliances or specific fittings — prospective purchasers are advised to inspect the property themselves. All fixtures, fittings and furniture not specifically itemised within these particulars are deemed removable by the vendor.
Hawley Square — Margate, Kent
Interested? Let’s talk