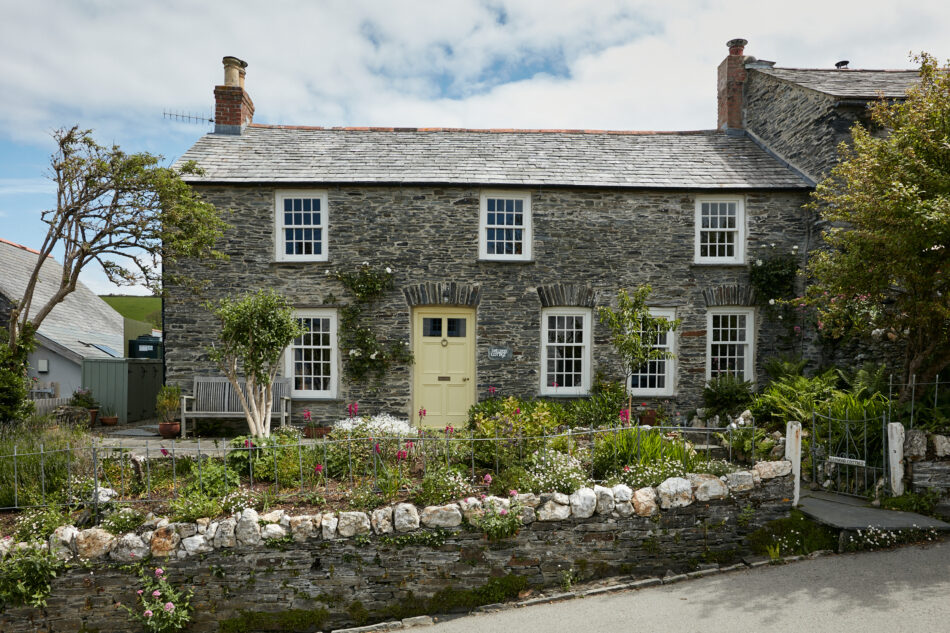 Harwood Cottage is a beautiful Grade II-listed Georgian cottage situated within the Boscastle Conservation Area and Area of Outstanding Natural Beauty. The three-bedroom cottage, which has three-tiered gardens that extend over 1/3 acre, has recently been restored and extended by its current owners; they worked with local craftsmen and heritage materials to enact a sensitive, thoughtful refurbishment. The cottage lies within the Old Town, just 50 yards from the Norman castle site which gave Boscastle its name. Bocastle is an ancient North Cornish fishing village, whose harbour is now owned and protected by the National Trust.

Harwood Cottage is believed to have originally been two dwellings, one of which was the former village bakery. It was built in the late 1700s and retains plenty of original details, such as beautiful 19th-century hornless sash windows across both floors. With traditional Cornish slate frontage and a roof of reclaimed local slate, which is super-insulated under the gables, the cottage is bounded on either side by two original brick chimney stacks.

The cottage lies on the medieval Fore Street, which was nicknamed ‘Oxen Road’ in the 1800s because of the oxen that pulled carts up and down from the then-working harbour. The idyllic harbour is arranged in a medieval layout and was painted by JMW Turner in 1824. It is now protected by the National Trust and still supports a small number of day fishing boats.

Facing west onto Fore Street, the home unfolds across two floors. A traditional 4-panel front door, painted in lemon yellow and framed by climbing roses, opens into a small entranceway. The external mortars and internal renders throughout the cottage are lime-based, ensuring maximum breathability; all of the internal walls are finished in mineral paint to keep the home warm in winter and cool in the summer. The ground floor also has underfloor heating.

The entranceway leads to the main stairwell, as well as to the living room on the right-hand side of the plan, which has engineered oak flooring and an original open cloam oven. The space is filled with light that floods in through three sash windows, illuminating the fully working wood stove and its slate hearth. The walls here – as they are throughout the cottage – are finished with a soft white mineral paint, while the woodwork is balanced by matt white finishes by Farrow & Ball.

The living room leads to the recently extended kitchen/dining area, as well as to a second living room and a stairwell that ascends to the first floor. Original slate flagstones run underfoot across the bespoke deVol kitchen, which has Carrara marble worktops, a butler sink, a Falcon range cooker and integrated white goods appliances. East-facing Heritage French windows in the dining area look onto the stone patio and rear gardens. The secondary living room has a fully working wood burner, engineered oak floorboards and a single sash window that opens onto the garden.

Two staircases ascend to the first floor, where there are three bedrooms; one of these is currently used as a study. Engineered oak floorboards feature across this level, creating a sense of continuity with the ground floor living rooms. There is a bathroom by Lefroy Brooks, fitted with a low, cast-iron bath by Drummonds that enjoys views over the rear garden; there is also a separate shower room, also by Lefroy Brooks, that has a double sink unit in Carrara marble and again looks out over the gardens.

Harwood Cottage is surrounded by three-tiered gardens that extend over 1/3 acre, which have been designed to blend seamlessly into the surrounding rolling hills and greenery. A low planted garden runs the length of the front of the house. There is a terrace and seating area here that enjoys views of the sunset over Forrabury Stitches – one of the best surviving examples of the medieval ‘crop rotation’ method of farming still in use today.

The rear gardens are accessed either via a side pathway that leads from the front of the cottage, or from the French windows in the kitchen. The first tier of the gardens is largely grassed, with a hedge border, ornamental cherry trees and low shrubs. There are two sheds on this level, currently used for storage, and a stone terrace bordered by bamboo hedging that is a lovely spot for outdoor dining. There is ample room here to build a freestanding studio, subject to the relevant permissions.

A small flight of slate steps leads down to a second level, where there is a wildlife pond and further lawns dotted with mature apple and pear trees. There is another dining/seating area here, with a greenhouse just below. Another set of slate steps lead down to a long, winding, woodland garden area, with mature trees, ferns and exotic shrubs, which is bordered by an idyllic stream.

Boscastle is a thriving village with a wonderful sense of community. There are three pubs, an award-winning farm shop and café, plus local stores and a primary school. There are plenty of excellent restaurants nearby that dish up the finest local produce, such as The Rocket Store (a seafood restaurant on the harbour, just five minutes from the cottage). The harbour is also home to a National Trust shop and cafe.

Beautiful walks can be accessed along the South West Coast Path, which runs right through Boscastle village. Bossiney Cove, Trebarwith Strand and Crackington Haven are all minutes away and ideal for swimming and surfing. There is excellent fly fishing to be found on the rivers of the Arundell Arms in Lifton.

Nearby Port Isaac has two Michelin starred seafood restaurants run by Nathan Outlaw. Padstow, which is home to Rick Stein’s Seafood Restaurant, Paul Ainsworth at No6 and Prawn on the Lawn, is also close by. The recently opened Pig Hotel at Harlyn Bay is a wonderful new addition to the area, while the beautiful Coombeshead Farm serves excellent food and is defined by its nose-to-tail approach to eating.

Bodmin Station is a 30-minute drive from Harwood Cottage and runs direct services to London Paddington. Newquay Airport is 35 minutes away.

Please note that all areas, measurements and distances given in these particulars are approximate and rounded. The text, photographs and floor plans are for general guidance only. Inigo has not tested any services, appliances or specific fittings — prospective purchasers are advised to inspect the property themselves. All fixtures, fittings and furniture not specifically itemised within these particulars are deemed removable by the vendor.
Harwood Cottage — Boscastle, Cornwall
Interested? Let’s talk