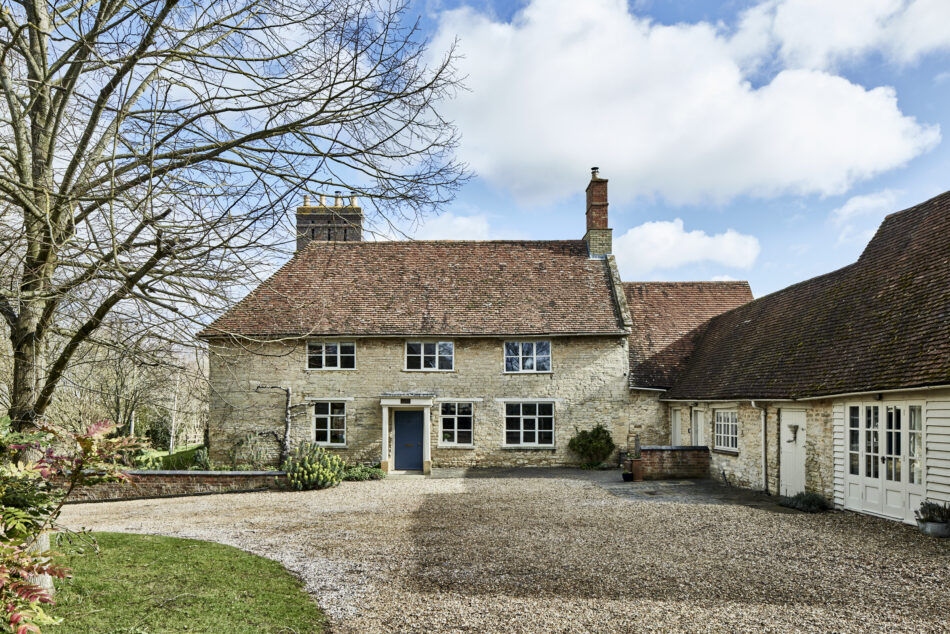 This wonderful seven-bedroom farmhouse, which extends over 4,000 sq ft, is nestled in the Buckinghamshire countryside and surrounded by its own mature gardens. The original part of Dagnall Farm dates back to 1700 and has been lovingly renovated by the current owners, who have used an array of rich colours and materials to create a delightful contemporary home that is deeply sensitive to the building’s character.

Found on the outskirts of the village of Wicken, Dagnall Farm feels brilliantly rural – backing onto farmland – yet is only a 15-minute drive from Milton Keynes station, which runs regular trains to London in 30 minutes. Each room from the house looks out onto its well-stocked and thoughtfully planted garden, which includes vegetable patches and an orchard, as well as a tennis court and a sun terrace that wraps around part of the house.

Having lived in the house for 11 years, the current owners continued the restoration started by the previous occupants, converting a redundant storage room into a separate wing; they created a sitting room complete with wood burning stove, two further bedrooms, a bathroom and a large utility room with brick floors.

A portico leads through to a generous entrance hallway with original wooden floorboards. To the right is a snug, painted a rich, dark blue, with sections of the walls clad in their original wooden panelling. A wood-burning stove has been installed in the brick fireplace, which rises up from the tiled floor. The snug opens into the kitchen, which contains an electric Aga, sage green-painted cabinetry and open shelves on the walls. A door leads to the utility/boot room, which has a large secondary butler sink and doors that open onto the garden on each side.

On the other side of the entrance hall is a formal dining room with wonderful Zoffany wallpaper and two sash windows with original shutters, which look over a stone hearth towards the garden. Beyond is a light-filled living room, which has windows on two sides that frame beautiful views of the rose garden.

At the southern end of the house is the converted, independent wing. A family room lies on the ground floor while wooden stairs ascend to two bedrooms, both of which have high ceilings and revealed wooden beams, and a shared bathroom. On this floor, there are another five bedrooms contained within the original section of the house, each with windows with far-reaching views of the surrounding countryside. The master bedroom is painted Old White and has a  charming fireplace. There are also three further bathrooms and a dressing room with bespoke cabinetry lining two walls.

Outside there are two stables attached to the southern part of the house, as well as further outbuildings.

Dagnall Farm lies within a beautiful garden and around 2 acres of meadows, which are bordered by surrounding fields. The garden has been designed as a classic country garden, with well-maintained hedging providing a central structure before leading into a wilder orchard beyond the lawn. This part of the garden has been rewilded, with pathways mowed through in the summer, and is filled with cow parsley and grasses. The orchard itself is home to apple, pear, cherry, plum and damson trees, with quince and ancient greengage on the lawn. There is a separate vegetable garden and a romantic rose arbour which blooms late into September and is home to an incredible variety of garden birds.

The owners have also rewilded the surrounding meadows, cutting through several meandering pathways. There is a copse of willow in the main field, while several weeping willows surround the natural pond.

Dagnall Farm is in a brilliant position, with beautiful walks easily accessible from the house. A footpath leads from the curved farm road through woods and farmland to the outskirts of Wicken village; both Wicken and Leckhamstead woods are close by and lovely spots for walking. There are numerous shops and pubs nearby, including an excellent local pub in Wickhen, while the National Trust house Stowe is a short drive away and has a charming tea shop. There are plenty of other culinary options; nearby Buckingham is home to much-loved deli Smith & Clay, while the Larder Cafe at Manor Farm, Bourton, is renowned for its breakfasts and the cheeses on offer.

Pretty market towns Winslow and Woburn are close at hand, and Oxford and Cambridge are both an easy drive away. The villages of Stony Stratford, Deanshanger and Leckhampstead are also all a stone’s throw from the house and are home to schools, shops and post offices.

Milton Keynes is a short drive away, with more extensive eateries and amenities, including a cinema, theatre, and road links to the M1. Trains run to London Euston from the main station, taking around half an hour.

Please note that all areas, measurements and distances given in these particulars are approximate and rounded. The text, photographs and floor plans are for general guidance only. Inigo has not tested any services, appliances or specific fittings — prospective purchasers are advised to inspect the property themselves. All fixtures, fittings and furniture not specifically itemised within these particulars are deemed removable by the vendor.
Dagnall Farm — Milton Keynes, Buckinghamshire
Interested? Let’s talk