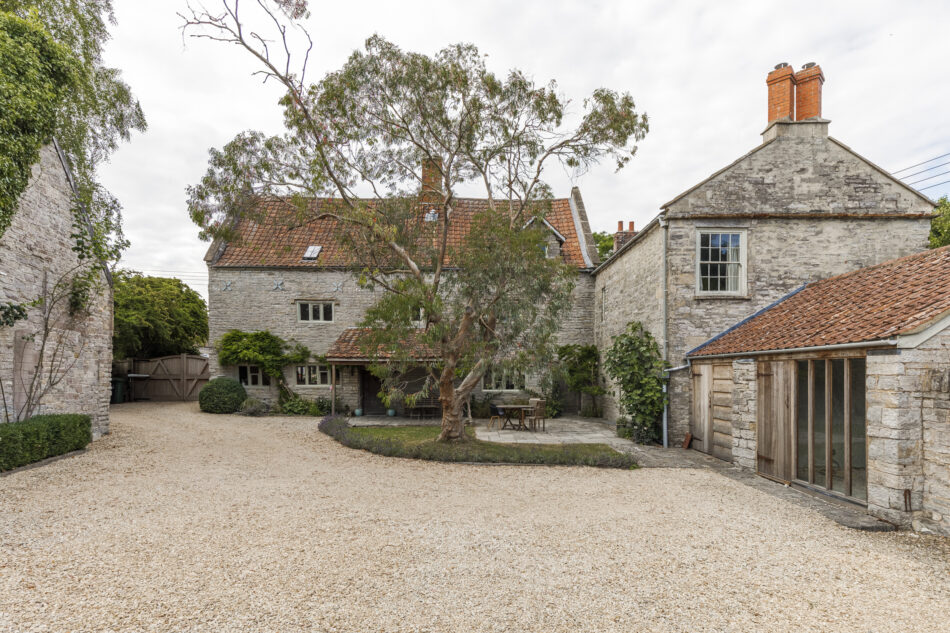 This incredible Grade II-listed five-bedroom house comprises a 17th-century farmhouse and a refined Georgian extension. The house, which extends over 4,200 sq ft, has been lovingly restored by the owners to create a series of light-filled spaces arranged around a beautiful courtyard garden. Textural finishes, including polished plaster walls and concrete worktops, complement the original period features, such as sash windows, exposed beams and flagstone floors, and result in a series of spaces that are, at once, calming and considered.

The house has had many lives since it was commissioned by the squire of Butleigh Court, along with a second farmhouse in the village, in c.1671. The house was extended in the early 19th century, resulting in a beautiful Georgian wing with a classically symmetrical façade. For more information, please see the History section.

At the side of the house is the entrance, where an electric gate opens onto a private driveway with parking for multiple cars. Here, an original, heavy oak door opens straight into the kitchen. This is a generous space with an incredible flagstone floor, a gas-fired Aga and complete with a 17th century dome bread oven, and a later Victorian bricked bread oven. Bespoke cabinetry, painted Firle by Aterlie Ellis, is topped with a hardwearing cast concrete worktop. Polished plaster has been applied to the walls, accentuating the sculptural shapes of the window recesses.

From here, the flagstone floor leads through into a wide hallway. This makes for a lovely snug or dining room, with a large inglenook fireplace fitted with a wood-burning stove, which provides a focal point for the room. At each side are original mullioned windows, with their ironmongery intact.

A large sitting room is at the rear of the house in the later Georgian extension. Typical of its era, the room has grand proportions, sash windows with shutters and a marble fireplace surround—a pair of French doors open to the garden from here. A mature fig tree is set to the side of this garden entrance allowing the gentle and delicate aroma of the fruit to permeate the house in the summertime.

There is also a playroom on this floor, where fitted bookshelves line two alcoves, and another large sash window allows light to pour in; the current owners have added a wall of chalkboard paint. Both the sitting room and playroom have romantic window seats.

An incredible 17th-century stone spiral staircase winds past a window to the second floor of the house, which is entirely given over to the main bedroom suite. This is a particularly generous space with a high-pitched ceiling and original oak beams. Windows frame bucolic views over the garden and nearby countryside. There is also a large walk-in wardrobe and a bathroom, which sits on the other side of the hallway and mirrors the bedroom in size and volume. A luxurious freestanding bath sits in the centre of the room, and there is a separate shower; the fittings are by Burlington. This room has also been finished with the same polished plaster as the kitchen, which gives it a lovely light and relaxing atmosphere.

On the first floor, in the Georgian wing, sit two big bedrooms and a shared family bathroom. The original 17th-century farmhouse has two further bedrooms, one with an en suite bathroom. The bedrooms are all of very good size, and each has wonderfully large windows framing pretty views. The shared bathroom has grey-painted tongue-and-groove panelling on the walls, set against narrow wooden floorboards.

On the ground floor is a downstairs WC lined with Cole & Son wallpaper.

The house is framed by beautifully planted borders where brightly coloured dinner-plate dahlias, roses and Japanese anemones attract plenty of pollinators. A partly covered paved terrace runs the length of the old wing of the house. An attractive eucalyptus tree sits on the edge of this seating area, while wisteria and magnolia grow up some of the external stone walls. A gravel drive borders an area of garden laid to lawn.

There are three outbuildings; a log store, a separate brilliant space which could be used as a studio, and a garden shed. There are also a few fruit-bearing trees, including apple, quince and pear trees.

Butleigh is a pretty village, ideally located for a wide network of walking and cycling routes, including through the nearby Mendip Hills (an Area of Outstanding Natural Beauty). It also offers a good provision of locally grown organic vegetables and dairy produce, and there is also a village shop, church, village green and cricket ground.

Glastonbury town centre is just five miles away; the Glastonbury Festival site is also within 15 minutes by car. In addition, the independent shops, cafes and restaurants of Wells, Frome, Bruton and the highlights of Hauser & Wirth Somerset, Osip, The Old Pharmacy and The Newt are about a 25-minute drive away.

This part of Somerset is mainly well served by excellent schools. Local schools include Butleigh Church of England Primary School, whilst independent secondary schools include Wells Cathedral School, Millfield Senior and Prep Schools, Downside, All Hallows and Bruton. State schools include Strode College in Street, The Blue School in Wells and St Dunstan’s School in Glastonbury.

Direct train services to London Paddington are accessible via Castle Cary, a twenty-minute drive away, with a journey time of 86 minutes. The national motorway network is via the A303 (M3), and Bristol Airport is easily reached in around 30 minutes by car. Bristol International Airport is approximately 50 miles from the house.

The house has been home to many interesting characters and at one stage, a great producer of cheddar cheese named Robert Neville-Grenville lived here. In 1893 he set up a cheesemaking school and taught from the farm. A hatch in the kitchen ceiling would have housed a winch, pulling the wheels of cheese up from where they were produced to where they were stored.

The Celtic Dobunni tribe most likely occupied the village of Butleigh long before the Romans came to Britain. Once the Romans arrived, they built a significant villa in the village, which was lived in until the 7th century.

The village is still home to St Leonards, a 14th-century church, which was restored and extended in the mid-19th century and has been designated a Grade II*-listing.