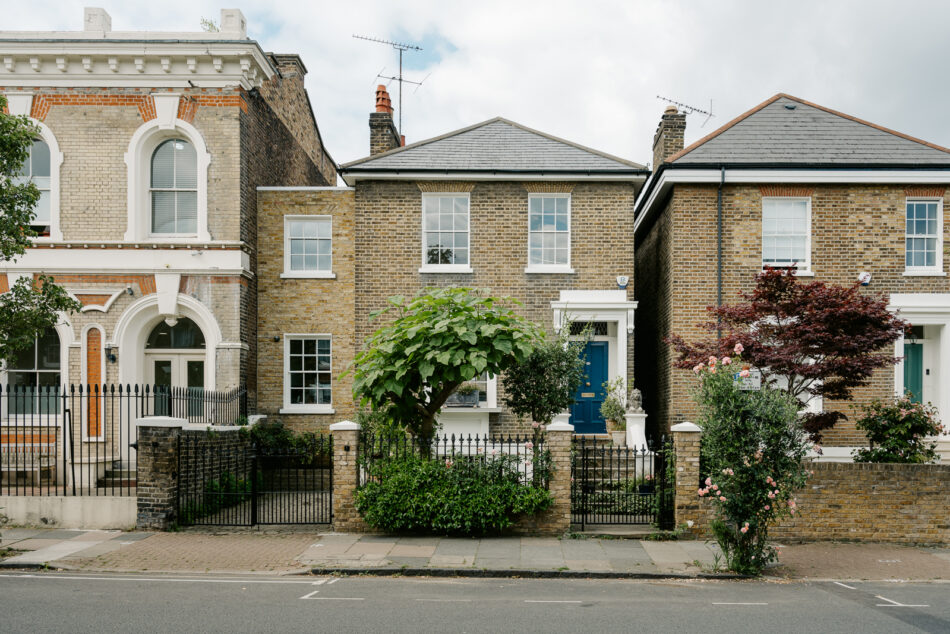 The feeling of seclusion within the wide set gardens is exceptional, and often the only sound is birdsong

Positioned in the heart of the Clapham’s Rectory Grove conservation area, this beautiful early Victorian house lies on Clapham Manor Street, equidistant to the High Street and the Old Town. Set over four light-filled storeys, internal accommodation extends to over 3,000 sq ft, with six bedrooms and a kitchen that opens up seamlessly into the garden. Countless historic details have been preserved, including chimneypieces, pitch pine floorboards, plasterwork, joinery and fenestration. The house also has coveted off-street parking and a separate exterior studio building in the exceptionally peaceful and beautifully designed southwest-facing garden.

Clapham Manor Street was laid out in the 1820s to link the old village with the new developments near the High Street. Renowned master builder Thomas Cubitt took a lease from the Bowyer family, lords of the manor in Clapham at the time, on the parcel of land in the middle of the street in 1828. He started developing it with local builders nine years later, between 1837 and 1855, and this house was completed in 1840.

The houses, including this home, were built from stock brick with stucco dressings. The result is a multifarious and charming early Victorian street, which has survived remarkably intact; most houses on the road have been restored to their original glory. Pavements on the road benefit from a recent community-wide planting of olive trees, which have been planted around signposts to soften the urban vistas along this wide-set thoroughfare. For more information, please see the History section.

Set back from the street, behind cast-iron spearhead railings covered in jasmine, the house is accessed through the front garden featuring a pink hawthorn tree and a mature foxglove tree . A grand entrance porch lies to the right of the façade; Coade stone lions stand guard atop the entrance piers above the main steps. Six/six sash windows punctuate stock brick, and the house is crowned with a hipped Welsh slate tile roof.

Entrance is to the generous hallway, papered in a charming botanical design. The house was built just a few years after the beginning of Queen Victoria’s reign and has several design details, including the beautiful Georgian cornice here, that are redolent of the earlier era. A clear vista extends from this hallway to the kitchen and garden beyond.

At the front of the house is the bipartite sitting room. Pale, chalky white walls and large windows with panelled shutters at both aspects allow exceptional light into the spaces. Carrara marble chimney pieces act as dual focal points. A jib door opens to an anteroom, currently used as a private sitting room, with French windows that open to the garden. A further study room is sequestered behind a handsome walnut bookcase and is accessed through a secondary jib door, set into the deep shelving.

The kitchen/dining room is at the rear of the plan. This room seamlessly connects with the garden through folding glass doors at both elevations. Roof lights set between exposed joists in the mono-pitched roof allow natural light to pour in. Charming floor tiles by Emery et Cie feature a stencilled design with vines and petite grenouille. The kitchen cabinetry and worktops are custom-made from American walnut, with integrated appliances, including a Smeg double oven; a butler sink is positioned centrally with a nickel-plate Lefroy Brooks Ionian crosshead mixer tap. The feeling of seclusion in this house is particularly clear from the kitchen; with the glass doors open, often the only sound audible is birdsong.

The lower-ground floor is home to two bedrooms. One has an en suite shower room featuring chrome brassware by CP Hart; the other has private access to the garden through French windows.

The first floor is home to three further bedrooms and two bathrooms. Two of the bedrooms are currently configured as one principal bedroom suite. These bipartite rooms combine to make a wonderful expansive bedroom with a separate seating area. Both rooms feature companion marble chimneypieces with cast-iron grates and can be separated by folding wedding doors if required. This suite opens to a large dressing room papered in a pretty ornithological design by Cole & Son. A window seat is set within custom-built joinery. The en suite bathroom has double sinks set within a terrazzo vanity unit. There is a separate shower enclosure and pale green tiles by Fired Earth.

A child’s bedroom is next to the main suite and features an exquisite plasterwork ceiling. Slim profile French doors open from the landing to the family bathroom on this floor. A particularly exceptional space, it features a marble floor and walls clad in duck egg blue Edwardian tiles from Fired Earth. A glass aperture is set into the roof above the burnished cast-iron bateau tub, with Stiffkey floor-mounted antique brass taps. The loo, washbasin, and nickel-plated taps are from The Water Monopoly.

On the top floor is another bedroom, currently designed as a home cinema. Conservation skylights are set into the pitch, and an arched casement window opens to the gardens at the rear. The walls and the ceiling have been painted a matt charcoal colour, and beautiful, silvered hand-stencilling lends a sense of subtle nighttime glamour to the room.

At the end of the garden is the studio. Clad in weatherboard, the building has a pitched roof and arched windows that echo those on the rear of the main house. Due to its current use as an artist’s studio, the space is exceptionally light care of with a trio of roof lights set into the ceiling and a bank of windows. There is also a WC. The space has planning approved for conversion to a separate residential unit.

The garden is southwest-facing and incredibly private. A large terrace laid with stone setts in a circular pattern lends a sense of antiquity. The tall garden wall is enveloped by careful tended mature ivy and evergreen hydrangeas. Mature ferns and Calla lilies provide further relief.

A pea gravel pathway leads through an archway formed from eight varieties of apple trees that create a verdant screen, separating the terrace from the lawn to the rear of the garden. Mature trees include a large viburnum tree, quince and fig trees. Further planting includes countless shrubs and evergreens. A pond is positioned on one side of the lawn, next to the entrance to the garden studio.

Additionally, there is a secure bicycle shed for four bikes set back in the side return at the front of the house.

Clapham Manor Street is brilliantly positioned in the heart of Clapham, close to both the High Street and Clapham Old Town; the open green spaces of Clapham Common and Battersea Park are also nearby.

There is a wide range of independent shops, galleries, cafes and restaurants, all within walking distance. Noted favourites include the Michelin-starred restaurant Trinity, The Pig’s Head, The Little Orange Door, Minnow, Sorella, The Bobbin and Clapham Picture House.

There is an excellent selection of local state and private schools, including nearby Eaton House, Parkgate School, Thomas’s and L’école de Wix Lycée Français.

The medieval village of Clapham was first recorded in the 9th century and was centred around St Paul’s Church, on nearby Rectory Grove.

In the 12th century, the church and Clapham Manor Street were constructed. The road was built as the main route to the parish church, rectory and manor house. The church was demolished in the late 18th century, and the present church was erected in 1815.

Clapham became increasingly connected to London through the 18th and beginning of the 19th century, and the village steadily expanded east to meet the new High Street.

In the early 1800s, the area was fast becoming a desirable suburban village. Still strong with rural hinterland separating it from London four miles to the north, it attracted wealthy merchants and the well-to-do middle classes who could travel to London by coach (before the trains arrived later that same century).

In the 1820s, Clapham Manor Street was laid out formally to link the High Street with Larkhall Rise (at that time, it was known just as ‘Manor Street’).

Thomas Cubitt was previously responsible for many of the finest squares in Belgravia, Pimlico and Bloomsbury, and his involvement in this project shows the grand ambitions of the development. Cubitt’s role here was more as an overseer than a property developer, with local builders commissioned to complete the works.

Clapham Manor was a great Elizabethan house that stood on the site of the present-day Turret Grove. It was sold off and eventually demolished in 1837, just before Queen Victoria ascended the throne, with houses subsequently built on the land formerly occupying the manor in 1844.