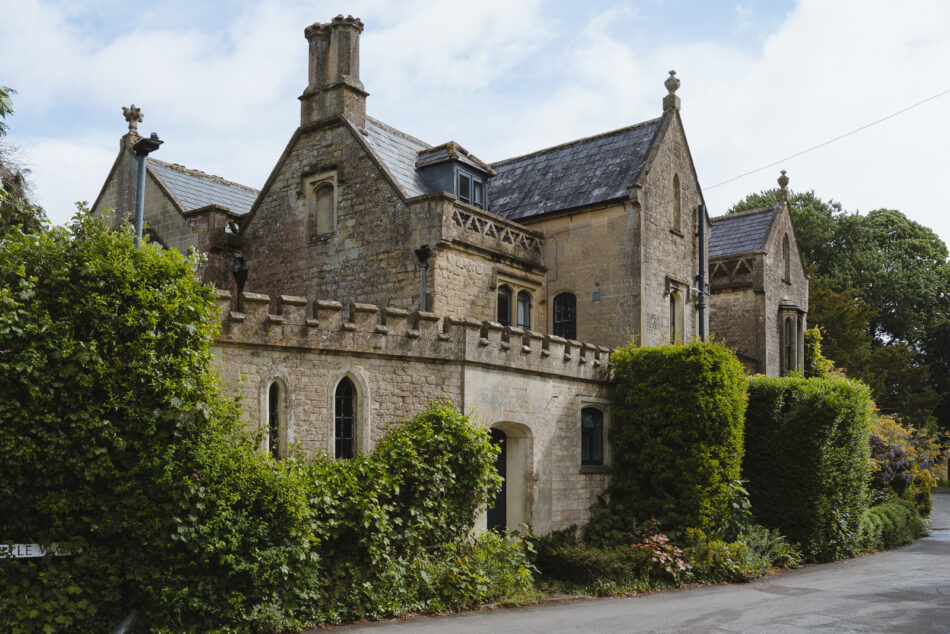 Castlefields is an exceptionally handsome Grade II-listed former hunting lodge set in grounds of a third of an acre. Built in the early 19th century in the Tudor Revival style, it is positioned on the edge of the market town Calne in Wiltshire, within the Calne Conservation Area. Internal accommodation measures some 6,000 sq ft, encompassing six double bedrooms, a suite of attic rooms and an incredibly versatile series of living spaces. The original architectural detailing is highly unique with wonderful original joinery, fenestration, plasterwork, and chimneypieces. It also features exquisite stonework, seen perhaps most notably in the beautiful stone cantilever staircase. Additionally, a separate cottage for ancillary accommodation is currently divided into two independent one-bedroom apartments.

Positioned on the River Marden, Calne is a pretty market town on the northwestern extremity of the North Wessex Downs hill range, a designated Area of Outstanding Natural Beauty.

This locally-important house was designed with remarkable attention to detail and at considerable expense for the time. Built from squared, coursed Chilmark stone, the house has a slate cross-gabled roof with elegant octagonal chimney stacks and cornicing at the chimneys’ apex. Stone eagles sit atop the pitch, at the roof’s gable end. Crenellated stonework features on parapet walls at the entrance porch, while windows, both lancet and mullion, and doorways are Tudor-arched. All these architectural details, including countless quatrefoil and trefoil motifs, clearly signify the picturesque Tudor Revival design, of which this house is a relatively early and imaginative example. For more information, please see the History section.

Set discreetly behind wide wooden gates, the driveway is laid with pea gravel and has plentiful parking space for several cars. The stonework of the exterior of the house features beautifully mature wisteria, roses and climbing hydrangeas at its different elevations. Entrance is to the generous flagstone porch and dramatic entrance hall, where the cantilever stone staircase rises at its centre. The domed ceiling features strapwork plaster detailing and an elegant cornice. The study is set to the left of the hall, with one of the house’s many canted bay windows opening to a verdant and open aspect. The remainder of the ground floor unfolds on a wonderful circular plan, with each room leading to the other effortlessly. The principal rooms all feature open fireplaces, and all windows house original panelled shutters.

The drawing room is situated to the west of the plan, while the cosy sitting room is to the east. The kitchen is conveniently located centrally, featuring beautiful forest green-painted kitchen cabinetry, with reclaimed planes of oak resting atop; elm boards run underfoot. The kitchen opens to the glorious orangery, which makes for a capacious dining room and comfortably sits fourteen for dinner. This leads to a secluded exterior terrace, where the wisteria winds its way around the structure. There is also a secondary service kitchen, a generous utility room and a separate boot room with a shower room also conveniently located on this floor.

The first floor is home to the main suite of bedrooms and bathrooms. One of the bedrooms is currently configured as a dressing room and another as a second study. The principal bedroom is a lovely room, painted plaster-pink with a generous en suite shower room encased with limestone tiles. It is quite separate from the eastern range of the house, which features two bedrooms connected by a Jack and Jill shower room. A further set of bedrooms are at the house’s southern range, while back stairs lead to the apex of the house and three additional interconnecting rooms and a bathroom. This floor is particularly charming, with elm boards running underfoot through the entire floor and exposed beams lending great character to the rooms. These rooms would be ideal for staff quarters, or as currently used, for overflow bedchambers.

Separately, the house’s cellars are exceptionally well-designed and spacious. Accessed by descending a stone staircase discretely set behind a doorway in the kitchen, a long brick-paved hallway leads to a series of rooms with excellent ceiling heights. This floor features an open well, currently used for watering the gardens in high summer.

The wonderfully mature gardens envelop the house creating a feeling of privacy and seclusion. Latticework fencing and yew hedges surround the perimeter with a canopy of Catalpa trees set above. Mainly laid with a verdant lawn, flower beds contain a mix of evergreen shrubs, including Buxus balls, ferns, and chic white hydrangeas and roses. There is an abundance of white, purple, and pink perennials that flower throughout spring and late summer. The gardens also have established plum and pear trees.

A hedge of tall bamboo reeds forms a palisade between the cottage and the main house, allowing for a degree of privacy and separation. The cottage is formed of two one-bedroom, self-contained apartments. Both share a private entrance pathway from Castle Street to the exterior of the house.

For further adventures in the natural world, Castlefields is situated on the very edge of Castlefields Park, where the river Marden winds through the bucolic countryside park reaching as far as Chippenham. A narrow plateau of high land to the west of Calne town centre, it is named after a prior castle that presided here in the 12th century. A separate cycle path (part of the Sustrans National Cycle Network) reaches as far as Bath, following along the line of the old Calne railway route.

Calne town centre has a brilliant selection of amenities, including plentiful independent provisors; a favourite local coffee shop is the Divine on the Green café. Nearby pubs The White Horse, and acclaimed fish restaurant The George & Dragon in Rowde are also recommended. The very popular town of Devizes is also nearby and has a wonderful farmer’s market on Thursday mornings. It also has an excellent butcher and artisan bakery, while the larger town of Marlborough has a vibrant High Street with plentiful independent shops, restaurants and cafes, and a large branch of Waitrose.

Lacock and Corsham are similarly favoured nearby towns, while slightly further afield are Tetbury for antique hunting and Westonbirt National Arboretum to sample the delights of the natural world. Nearer to home is Bowood House and Gardens, the perfect place to while away an entire day with plentiful distractions for children and adults alike.

The selection of nearby schools is excellent, for both state and independent. There are several local state primary schools within walking distance, as well as the very good Kingsbury Green Academy, catering for ages 11-18. A further choice of three senior state schools is in Chippenham, a 15-minute drive away. Independent schools nearby include St Margaret’s Preparatory School, while St Mary’s Calne offers both day and boarding at secondary level; both are within a short walk from Castlefields. Dauntsey’s School in West Lavington is slightly further afield, which offers both day and boarding. Marlborough College is also nearby, in addition to the plentiful choice of further schools in Bath.

Fast and half-hourly rail services to London Paddington are available from Chippenham rail station, just a 15-minute drive away, with journey times taking 68 minutes precisely. Bath and Bristol journey times in the opposite direction are just 10 and 15 minutes, respectively. Bristol International Airport is approximately 40 miles west and just over an hour’s drive away. The M4 is around 10 miles to the north for fast routes to London and Bristol, where the M5 can be joined for the Southwest.

Named after its position on a river (‘Calne’ being a Celtic word for water currents), Calne began as an Anglo-Saxon royal estate. Calstone, at the river’s source, shares the same root, and the Iron Age hill fort of Oldbury or ‘Old Borough’ was the ancient centre of the town.

By the time of publication of the Domesday Book in 1086, Calne had developed into a wealthy town with nine water mills. In 1331 King Edward III encouraged the expansion of the woollen cloth trade by allowing skilled workers from Flanders to come to England to stimulate finishing processes like fulling and dyeing of the cloth. For five hundred years, Calne was a centre for the woollen cloth industry, assisted by several fulling mills along the river Marden. Workshops flourished, and clothiers built fashionable houses on The Green. By the early 19th century, the industry had moved to the west with the construction of steam-powered factories around Trowbridge, Bradford-on-Avon and Frome.

Calne is most famous, however, for being the home of the poet and philosopher Samuel Taylor Coleridge, who came to the town while recovering from a period of mental anguish. He settled in town and even became involved in local politics by galvanising the people of Calne in ‘a speech replete with argument and with persuasive eloquence’ to petition Parliament to oppose the Corn Bill because he knew it would cause suffering by keeping the price of bread high.

Castlefields itself was built for Henry Alworth Merriweather in the 1820s as his country home. Merriweather was Serjeant-at-Law and Town Clerk of London who had family links to the area; his father was Henry of Calne, a prominent lawyer of the time. Merriweather’s principal residence was at Whitehall Palace in Westminster, famously designed by Inigo Jones.