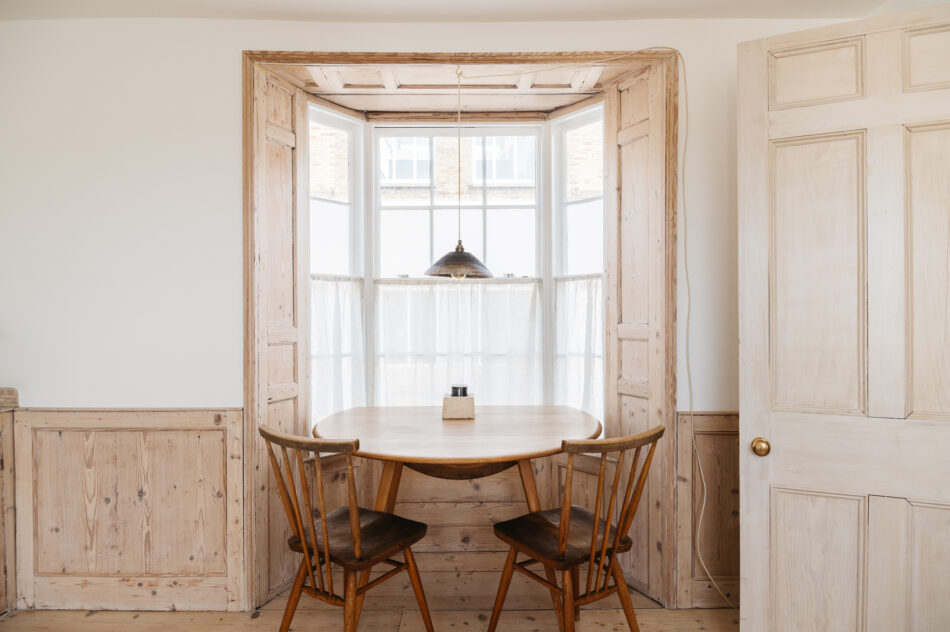 Regency panelling and floorboards have been stripped back to their original state, creating clean, honest spaces

Set in the seaside town of Margate in Kent is this beautiful townhouse on Caroline Square, a quiet residential street a short walk from the sea. Arranged over three floors of immaculately restored interiors, the house was recently taken back-to-brick and sensitively rebuilt with a considered approach to the original fabric of the house. Unfolding across three floors, the Grade II-listed house has two-bedroom suites and a lovely courtyard garden at the rear. Located in Cliftonville, it is close to some of Margate’s best restaurants, independent shops, and cafes and is very close to Margate Old Town.

One of England’s first seaside resorts, Margate was little more than a fishing village until the Georgian period. From 1714 to 1830, the town was transformed into an escape for Londoners seeking the medicinal benefits of seawater. Now a bustling seaside town, the area is home to blue-flag beaches and exceptional coastal scenery, alongside a number of cultural attractions, including the Turner Contemporary. J. M. W. Turner decried that ‘the skies over Thanet are the loveliest in all Europe’ and painted a number of landscapes in Margate throughout his life. For more information, please see the History section below.

The façade of the house has recently been painstakingly stripped back to its original brickwork and re-pointed with lime mortar. Careful attention to detail has been taken to reinstate leadwork, cast-iron rainwater systems and restore the windows on the front. Beautiful ironwork, befitting of its Georgian origins, has been incorporated.

A classical arched doorway leads to the main entrance hall, where original floorboards have been stripped back and treated with a light Liberon stain. Adjacent is the main reception room. A charming space, this room is clad in original panelling, has a Regency cast-iron fireplace and is flooded with light from dual-aspect windows. At the rear of the plan is a bright, light-filled kitchen with skylights and access to the rear garden; woodblock worktops add a rustic charm and fitted white cabinetry maximises light.

Ascending the original staircase, the first floor has been opened up into the eaves and has voluminous ceiling heights. The main bedroom has pale woodwork, complemented by white-painted exposed beams; an original fireplace completes the space. Adjacent is a large bathroom finished in wonderful French waxed concrete. There is also marble shelving, Philippe Starck and Duravit fittings and a wonderful freestanding bath.

On the lower-ground floor is a secondary bedroom. From here, windows overlook the front and rear of the house and allow light to pour in; an en suite bathroom is finished with a walk-in shower, vanity and WC. The hallway has been completed in Douglas fir tongue and groove panelling, and the original coal hole next door has been turned into a useful utility room.

The house also has a new slate roof and has been expertly insulated with natural wool and wood fibre insulation throughout; soundproofing has been fitted where possible and new wiring and plumbing has been installed.

At the rear of the home is a lovely garden. A veritable suntrap, the space has been zoned into a large patio with York stone paving and a lawn. It is perfect for summertime entertaining and even has a useful outhouse with a WC.

Caroline Square is in an incredibly central location but benefits from a quiet, residential feel. The seaside town of Margate is known for its wonderful creative community and abundance of galleries and contemporary arts spaces. Margate is also famous for Dreamland, a vintage theme park that has rides, musical acts and a drive-in cinema. There are numerous restaurants, including Angela’s (a sustainable seafood bistro) and their sister restaurant Dory’s , Sargrasso and Bottega Caruso. Margate is home to independent shops such as Werkhaus, Haeckels and the cosy Margate Bookshop.

The house is also a short walk to the beach and close to numerous walks such as The Viking Coastal Trail (an eight-mile hike that links the towns of Ramsgate, Broadstairs and Margate along Kent’s cliffs and beaches).

The nearby coastal towns of Broadstairs and Ramsgate are also well known for their array of pubs, restaurants and independent shops, as are Herne Bay and Whitstable, which are slightly further afield.

The house has excellent links to London, with trains from Margate to London St Pancras in under an hour and a half or London Victoria in one hour and 45 minutes. There are trains to Canterbury in half an hour, which is also a short drive away and the Eurostar is reachable at nearby Ashford International.

Margate has a vital role in the history of the seaside holiday. It can be claimed to have been a pioneer of the concept. The 1750s saw the first use of bathing machines, the first Georgian square built in a seaside town, the first development beyond the historic footprint of a coastal town and the development specifically to serve holidaymakers.

The influx of tourism gathering pace throughout the 18th century transformed the small working fishing town into a haven for society, attracting nobility for the ‘season’ in the same fashion as Bath. The benefits of the sea air and bathing led to Margate becoming a desirable location to convalesce; The Royal Sea Bathing Hospital was opened in 1791.

The town’s proximity to London meant that Margate had been at the vanguard of seaside discovery for many living in the city. The dawn of the railway in the first half of the 19th century meant that coastal towns further afield became an option for those more well-heeled, and Margate for the first time faced competition. However, the pioneering spirit remained. In 1846 trains started coming to Margate, which meant it could offer the lower-middle-class the first viable holiday destination. This brought the concept of a holiday to the masses and drove forward reforms to working standards, such as The Bank Holiday Act of 1871.

The area of Cliftonville represented Margate’s eastward expansion in the 19th century; the area was built as a haven from what had then become the bustling and boisterous town centre. Cliftonville boasted its own beaches and offered a more sedate pace of holiday. The beaches around Cliftonville remain very popular in part thanks to the Grade II-listed Walpole Bay Tidal Pool constructed in 1937 during the Physical Fitness Campaign, which saw the large-scale building of Lidos and sports facilities.

Margate was recently granted the Government Town Deal fund, which saw over 22 million allocated for the future regeneration of Margate and Cliftonville, including the restoration of the Walpole Bay Tidal Pool.