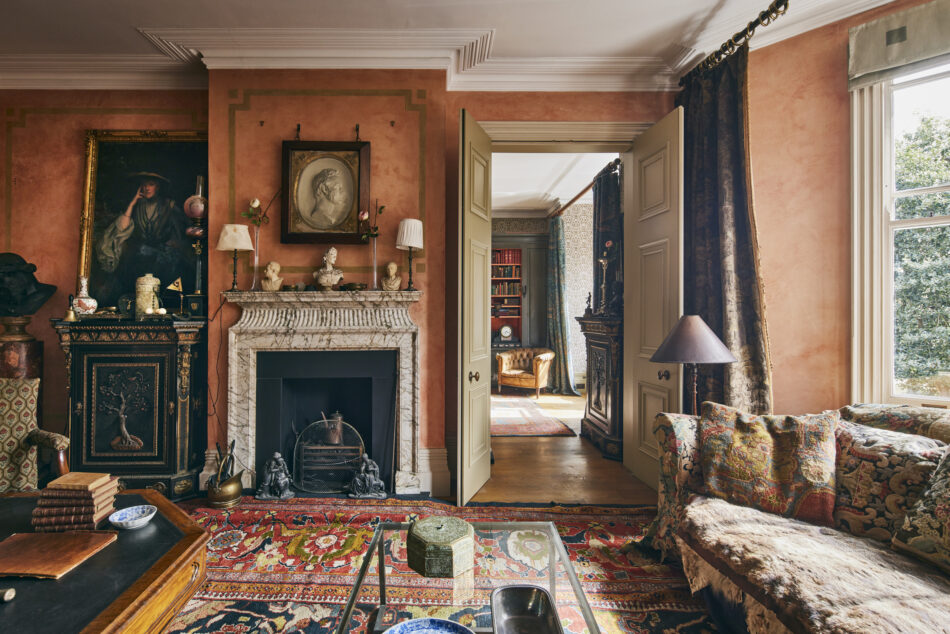 This exquisite four-bedroom apartment overlooks the banks of the River Thames from Chelsea’s esteemed Cheyne Walk. It is situated on the coveted west and south-facing first floor of Carlyle Mansions and exceeds 2,250 sq ft internally, with rare step-free lateral space and the convenience of an on-site porter.

The prestigious red-brick mansion block, built in the 1880s, is named after historian, mathematician and sage Thomas Carlyle and has since become synonymous with a rich legacy of literary residents. Henry James, T. S. Eliot and Ian Fleming are just a few of the noted authors whom, at one time or another, called Carlyle Mansions home, earning the building the amusing sobriquet “The Writer’s Block”.

This particular apartment was the residence of British designer and academic Bernard Nevill, who held professorships at Saint Martin’s School of Art and the Royal College of Art. He was also design director for Liberty London from 1965, revitalising their traditional prints, introducing art deco-style patterns and Islamic themes. His former residence, West House on Glebe Place, was the setting for some of the most iconic scenes in the cult cinema classic ‘Withnail and I’, and this apartment bears many of the fabrics, artefacts and artworks of that lavishly curated backdrop.

The apartment is one of few in the block with multiple aspects, framing views south over the river and west onto Lawrence Street. The first floor is accessed via stairs or a lift, with entry to a wide private hallway with a cloakroom at one end. Immediately to the right is the kitchen, where granite worktops span the perimeter and plentiful storage extends to ceiling height.

To the left are a pair of handsome interlinked reception rooms with oak floors, south-facing windows and fireplaces set into their dividing wall. The first is arranged as a dining room and library, with bespoke shelving and a deep window with a seating area that lifts the space into the foliage of the towering Plane trees beyond. Double doors lead through to a large living room where light floods in from a bay window, amplifying the already impressive sense of volume.

A dramatic corridor offers a true sense of the apartment’s scale, with an uninterrupted view down to the main suite at the far end. The bedrooms, one of which has most recently been used as a study, are located at various points along the hallway, interrupted only by a sizeable utility room on the left and a family bathroom on the right. The main bedroom is approximately six metres in length and clad in beautiful silk wallpaper. It has its own dressing room with bespoke storage and an en suite shower room clad in smart green marble.

Cheyne Walk runs along the north bank of the River Thames and is one of London’s most interesting and distinguished streets. The King’s Road, with its excellent selection of shops, restaurants and bars, is a few minutes walk away from Carlyle Mansions. Sloane Square and the Royal Court Theatre are close by, along with Battersea Park and Chelsea Physic Garden. The RHS Chelsea Flower Show is held annually in the grounds of the nearby Royal Hospital Chelsea on the Chelsea Embankment. Several excellent schools are nearby including The Hampshire School Chelsea and Garden House School on Duke of York’s Square.

Sloane Square and South Kensington Underground stations are all within walking distance and run District, Circle and Piccadilly Line services. The A4 provides quick access by car to Heathrow Airport (approximately 35 minutes), and the southwest of England.

‘The Portrait of a Lady‘ by Henry James

Please note that all areas, measurements and distances given in these particulars are approximate and rounded. The text, photographs and floor plans are for general guidance only. Inigo has not tested any services, appliances or specific fittings — prospective purchasers are advised to inspect the property themselves. All fixtures, fittings and furniture not specifically itemised within these particulars are deemed removable by the vendor.
Carlyle Mansions — London SW3
Interested? Let’s talk