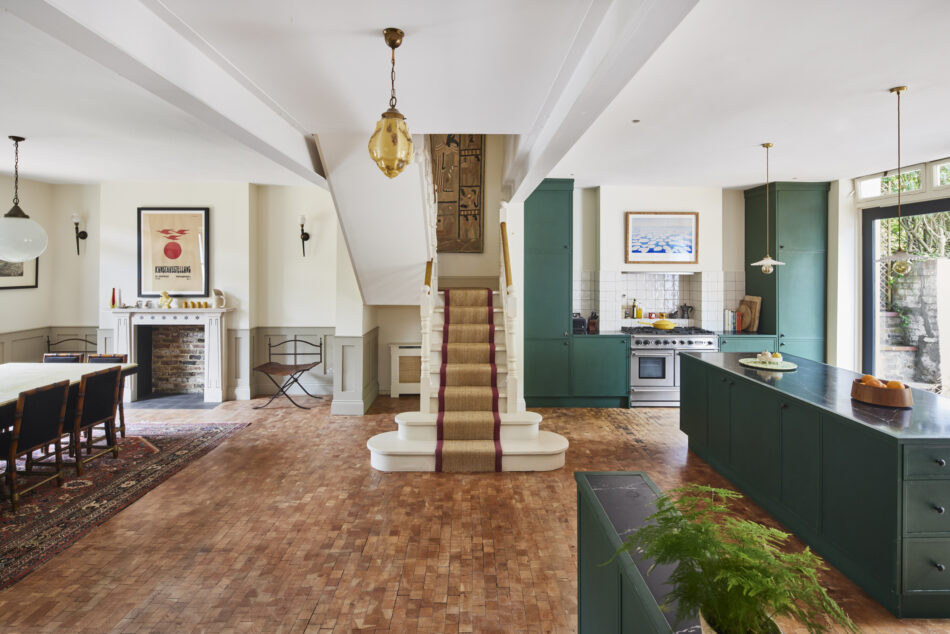 The elegant features of this Victorian home remain, with modern interventions beautifully incorporated

This imposing four-storey house lies in a discreet corner of Camden Square, within its conservation area. Built in the 1860s, the Victorian home has five bedrooms and extends to over 3,300 sq ft internally. It has exceptionally expansive rooms throughout, all with an incredible quality of light. Great care has gone into the design and renovation, which has resulted in all principal rooms being opened up, yet the integrity of the original plan remains. Historic features have been restored and celebrated and include beautiful Victorian cornicing, tall box sash windows, marble chimneypieces, and pitch pine floors, while the imaginative late-20th century interventions on the lower floors coexist effortlessly. In addition to the garden square, there are beautiful private gardens at both the front and rear of the house.

Camden Square and the surrounding streets were laid out in the early 19th century – most houses were built by 1860. St Paul’s Church was built in the centre of Camden Square and completed in 1849 to designs by noted architects Ordish and Johnson. The original church was destroyed during World War II, and a contemporary church hall has been introduced in its place. Camden Square survives today as an excellent example of a mid-Victorian London suburb.

This Victorian house was initially reimagined in the 1970s, with some of the works completed by previous owner and renowned environmental engineer Max Fordham, whose practice worked on countless important British buildings, including Tate St Ives. Fordham was an early proponent and pioneer of building with sound eco-friendly principles. In the reworking this home, the elegant features of the Victorian structure have been carefully preserved while modern interventions have been introduced using honest materials and design principles, including large wood-framed windows, Douglas fir block flooring and most notably, a soaring steel framed conservatory at the side of the house.

Set behind a low stucco wall with elegant balusters, a garden gate set within tall laurel hedges opens to the expansive front garden, featuring a bay tree, yew trees, roses and sea buckthorn. The original redesign for the house has been beautifully preserved and restored by the current owners. A double-height steel-frame glass structure at the side of the house acts as the primary entrance to what is now the ground floor. The initial intention was based on socialist principles, thinking it unmodern to delineate entrances for the main house and the domestic staff. As part of the works, the original stoop and entrance hall were removed, replacing them with the soaring glass addition. Further expanses of glass, both historic and contemporary, define the main house’s neoclassical stucco elevation.

Entry is to the spacious, light-filled hallway which sits inside the glass addition. Here, there is a guest cloakroom discreetly concealed behind a jib door with hand-stencilled walls. A utility lies to the rear, with separate access to the garden through steel-framed French doors.

The kitchen and dining room form one spacious and connected room on the ground floor, with Fordham’s exposed oak joists forming a primary architectural feature and Douglas fir block flooring. The kitchen lies at the front of the plan, and the generous dining area is at the rear. Expanses of glass set in pivot doors face the front garden, while kitchen cupboards and a central island are painted lead grey with sheets of black quartz resting atop. Appliances are mainly concealed behind cupboard doors, with a large Falcon steel range cooker and butler sink positioned within the cabinetry. The dining area has wainscotting and an open fireplace with a working fire. A large pivot door opens to the garden at the rear.

The centrally positioned staircase rises to the first floor and the principal living rooms. These rooms are connected and mirror the plan below, yet have a degree of separation, care of the staircase. Handsome floor-to-ceiling bookcases line the entire length of the west-facing wall. French doors lead to the sunroom, which is set on the upper floor of the glass addition.

Both main living spaces on this floor have wonderful original pitch pine floors, elegant cornicing, further exposed joists and beautiful marble chimneypieces with working fires. The light is exceptional in these rooms, with tall sash windows at both north and south aspects with original panelled shutters; wrought-iron Juliet balconies are also still in place. The adjacent sunroom extends the entire depth of the plan, with a glass mono-pitch roof and separate spiral staircase descending to the rear garden below.

There are five bedrooms on the first and second floors, with the principal bedroom suite positioned on the first floor. This has been beautifully designed to encompass three distinct spaces. It opens to a dressing area with a bank of panelled wardrobes painted deep blue. Sleeping quarters lie to one side and the en suite on the other. The bathroom has nickel-plated brassware and a beautiful, burnished nickel bateau bathtub, all by Catchpole and Rye. A spacious and separate shower enclosure is positioned at the rear of the room, and the sink is set in a vanity unit.

There is an additional bedroom on the first floor. On the second floor are three further bedrooms and the main bathroom featuring Cast Iron Bath Company chrome-plated brassware with walls encased in sea-green tiles.

The gardens are exceptionally peaceful and private for such a central location. The front garden is positioned behind a bank of tall laurel bushes, which creates additional privacy from the garden square, and is surrounded by further shrubs, trees and roses.. A south-facing oasis, this terrace is laid with French clay tiles to form a spacious area for outdoor seating.

The rear garden is accessed through the large glass pivot door directly from the dining area, the sunroom on the first floor, and separately from the utility room and boot area. A further terrace with French clay tiles leads to a verdant circular lawn, surrounded by an array of seasonal flowers and shrubs, including hollyhocks and roses. Trees include a walnut tree, cherry tree, and beautiful silver birch.

Transport links are excellent, with Camden Square equidistant between the Underground stations at Camden Town (Northern Line) and Caledonian Road (Piccadilly Line). Camden Road train station is close at hand for services on the East-West London axis, while the house is also well placed for access to King’s Cross St Pancras and the Eurostar terminal.

Please note that all areas, measurements and distances given in these particulars are approximate and rounded. The text, photographs and floor plans are for general guidance only. Inigo has not tested any services, appliances or specific fittings — prospective purchasers are advised to inspect the property themselves. All fixtures, fittings and furniture not specifically itemised within these particulars are deemed removable by the vendor.
Camden Square — London NW1
Interested? Let’s talk