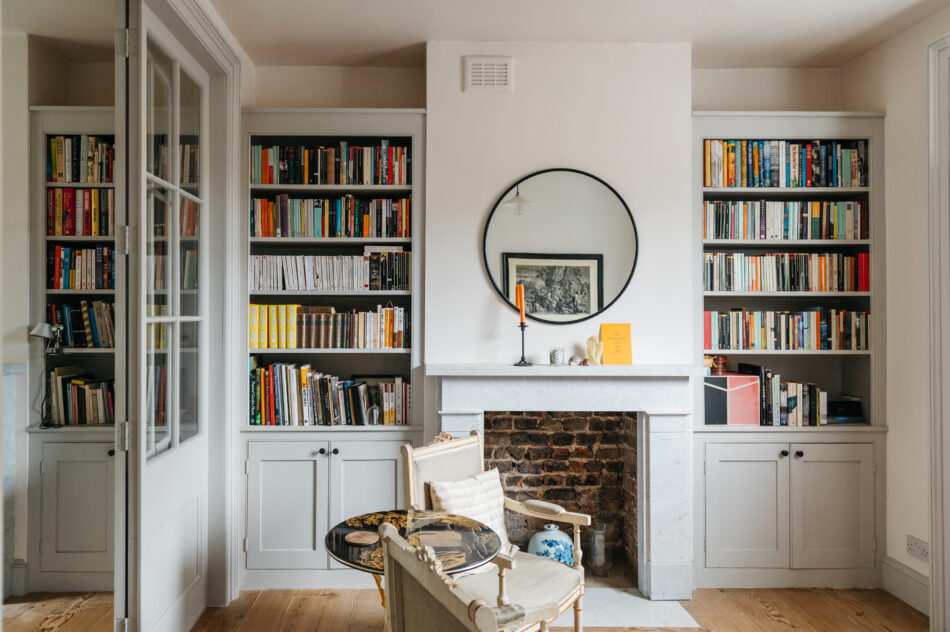 This is a beautiful, Grade II-listed, two-bedroom, 19th-century workers’ cottage with a lovely west-facing garden in Limehouse. The house has been recently and thoughtfully restored by the current owners, who have recognised its humble roots – originally, it was built for those who worked in the nearby docks – while adapting it for modern use. Located minutes from Limehouse DLR station, the house has incredibly easy access into central London.

Built in the early 19th century, the current owner wanted to restore the interior to something close to what it might have been when it was first built. The architectural details were designed and sourced, in large part, by two decorative historians with extensive experience working in Spitalfields and East London. They focused much of their attention on the woodwork in particular, for example, the framed box shutters in the sitting room, the rising shutters in the principal bedroom and the reclaimed pine floorboards that run throughout the ground floor.

During their work, they made one extraordinary discovery, the basement, which had been completely hidden and had remained unused for many years. It now makes for fantastic additional storage, utility space, or even a wine cellar.

During the 19th century, Bromley Street and the surrounding area were home to rope makers, and their factories and workers would lay out and measure the rope along the street. Hence, the road is incredibly straight.

Entry is behind original cast-iron railings and slightly set back from the road. The arched front door, framed by two pilasters and crowned by a glazed fanlight, opens into a generous hallway. To the right is the sitting room; once open-plan, it has been divided by bespoke joinery, which forms a glazed partition, separating the two spaces. This creates a sitting room at the front, a useful office space, and a library at the rear.

Both rooms have a marble fireplace designed especially for the space, while the walls are lined with elegant handmade bookshelves. Both rooms have a brilliantly calming feel, helped by the various shades of grey that the walls and woodwork have been painted. Modern cast-iron radiators, made in the traditional style, are found throughout the house.

The rear of the house is home to the kitchen. Recently installed, handmade cabinetry by Sebastian Aronowitz for the London Kitchen Company lines the walls and is set against wonderful, characterful Zellige tiles. The kitchen is complete with stone floors and stylish brass taps. From here, a door opens onto a verdant garden. There is also a cellar on this floor, accessed via match-board panelling and stairs.

Ascending upstairs are the two bedrooms; the principal bedroom lies at the front of the house, enjoying two large refurbished sash windows with new rising shutters, as well as a wall of bespoke built-in wardrobes, each with plywood drawers. A fireplace with a fluted surround is found on the other side. The second bedroom is also a generous double. Both share a bathroom with a separate walk-in shower, bath and a sash window overlooking the garden.

The west-facing garden is arranged around a crab apple tree and is home to many more carefully chosen plants and trees; jasmine and roses for their sweet smell, a bay tree, and a silver birch, to name a few. The garden is bathed in light throughout the afternoon and evening, with much space for dining outdoors. There is also a useful shed towards the rear of the garden.

The house is located on a peaceful street a few minutes’ walk from Stepney Green Park and Stepney City Farm and café. The green open spaces of Mile End Park, Victoria Park and, more locally, St Dunstan’s Church – dating from the 12th century – are also all a short walk away.

The famed Punjabi restaurant Tayyabs is nearby, as is the much-loved bakery Rinkoffs and several excellent coffee shops, including Aldgate Coffee House. The eclectic George Tavern on Jubilee Street is recommended for drinks and occasional music events, while the Whitechapel Gallery and provides a cultural distraction. Ian McKellen’s famous pub, The Grapes, is a short walk from the house, as is The Old Ship on York Square.

Canary Wharf – with its shops and restaurants – is on the same DLR line, or is a twenty-five-minute walk from the house. Spitalfields and Shoreditch offer further opportunities for dining, entertainment and shopping, with restaurants including Ottolenghi, Cecconi’s and St. John Bread & Wine. Independent cinemas,and the Everyman, are both close by.

The house is brilliantly positioned between Canary Wharf and the City. The nearest stations are Lime House (DLR), Shadwell (Overground), Stepney Green station (Circle, District and Hammersmith & City lines) and Whitechapel (Central Line and Elizabeth Line). The latter now provides access to central London in ten minutes and Heathrow Airport in 30 minutes. Whitechapel station is also on the London Overground line running between Clapham Junction and Highbury and Islington.

Please note that all areas, measurements and distances given in these particulars are approximate and rounded. The text, photographs and floor plans are for general guidance only. Inigo has not tested any services, appliances or specific fittings — prospective purchasers are advised to inspect the property themselves. All fixtures, fittings and furniture not specifically itemised within these particulars are deemed removable by the vendor.
Bromley Street — London E1
Interested? Let’s talk