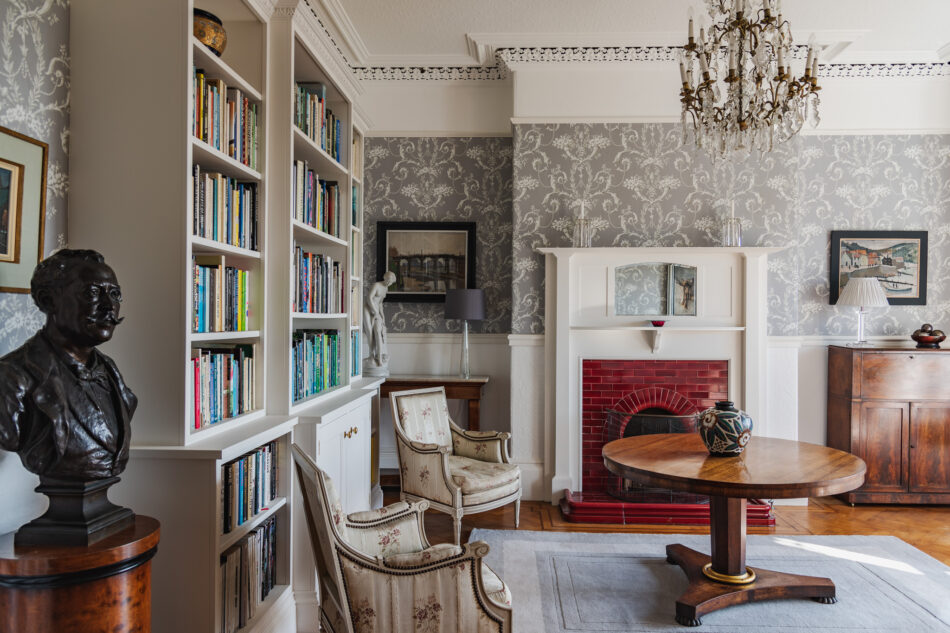 The master bedroom overlooks dramatic coastline and the sea beyond

This wonderfully expansive Grade II-listed Victorian villa can be found on Beach Lawn, one of the most coveted addresses in the north of England. It is laid out over 8,000 sq ft and has a rear walled garden that extends over 150ft. Refurbished throughout under the current custodians to the highest of standards, the house takes a commanding position over the Crosby Coastal Park and mountains of Wales beyond. The view beyond the Coastal Park leads to Crosby Beach, which is over 2.5 miles long and features the iconic Anthony Gormley installation “Another Place”, 100 cast iron figures modelled after the artist’s own body, along with the Angel of the North, these represent the most significant commissions of public contemporary art nationally.

The terrace of grand villas which make up Beach Lawn, was laid out on land owned by the Ismay family, owners of the White Star Line shipping company and of Titanic infamy. This particular house was built circa 1870 for international tobacco merchant William Goodbody. As such, the house retains several markers of his ownership, including but not limited to the cornicing styled after tobacco leaves, and the etched glass in the vestibule door bearing the initials of his immediate family.

Entry into a glazed vestibule leads to a large hall with the library to the right, featuring a glazed red brick arts and crafts style fireplace. To the left lies the drawing room, decorated in a traditional cornflower-yellow hue. To the rear of this are the former staff quarters which house a large guest cloakroom, a pantry and, at the garden side, a considerable kitchen which contains a professional standard Wolf range and extractor. The dining room can be found on the right and is replete with lavish original cornicing, a black marble fireplace and full-height triple-sash windows.

The staircase, lined with floral wallpaper in an Art Nouveau style, leads up to the first floor and the three main bedrooms. On the lawn side, the master bedroom overlooks the sea and has its own dressing room, adjoining bathroom and withdrawing room which opens onto a balcony. To the rear of the plan – on the garden side – are two further bedrooms, one of which has a private bathroom. On the second floor, there are four more bedrooms, with a large guest suite to the garden side and two capacious bedrooms to the lawn side overlooking the sea. One of these is currently arranged as a studio.

Upon descending to the lower ground floor, further rooms are revealed; one of these features the original kitchen range and another, the largest of the rooms on this floor, a snooker table. The scale of all the rooms radiates a splendour that reflects the area’s position as a global trading centre.

Both the ground and lower ground floors provide outdoor access on the garden side of the plan, leading to a sun terrace which is perfectly set up for al fresco dining. Beyond this are manicured flower beds and a large lawn. To the rear of the formal gardens are further beds. This brings the visitor to the rear of the property, where a mews double garage – complete with inspection pit – is. One of these garages is currently arranged as a painter’s studio.

Beach Lawn is one of the most desirable addresses in the north of England. It is a no through road overlooking the beautifully maintained Crosby Coastal Park and the breath-taking coastline of Crosby Beach beyond. In the distance, the mountains of Snowdonia can be seen. There are numerous coastal walking trails on the doorstep. A short distance to the north, further dramatic coastline can be found at the National Trust Reserve Formby Beach, known for its sand dunes and its population of rare native red squirrels.

20 minutes away, the charming villages of Freshfield and Formby offer a wide array of conveniences, including a Waitrose, numerous independent coffee shops, restaurants and pubs. The area lies at the centre of England’s Golf Coast, home to three Royal courses, including Royal Birkdale which is a 25-minute drive from the house. Schooling is exceptional in the area, and includes Merchant Taylor’s Boys and Girls schools, which are 5 minutes by car.

Waterloo is the closest station, less than five minutes’ walk. The station runs direct trains to Liverpool Central (circa 15 minutes) every 15 minutes. Connections to Liverpool Lime Street are a two-minute journey. From here, trains run frequently to Manchester in under 40 minutes and London Euston in under 2 hours 25 minutes. Alternatively, Liverpool city centre is easily accessible by car in under 20 minutes. Liverpool John Lennon Airport can be accessed directly from Waterloo train station (approx. 40 minutes), or alternatively, is a 35-minute drive.

Please note that all areas, measurements and distances given in these particulars are approximate and rounded. The text, photographs and floor plans are for general guidance only. Inigo has not tested any services, appliances or specific fittings — prospective purchasers are advised to inspect the property themselves. All fixtures, fittings and furniture not specifically itemised within these particulars are deemed removable by the vendor.
Beach Lawn — Liverpool, Merseyside
Interested? Let’s talk