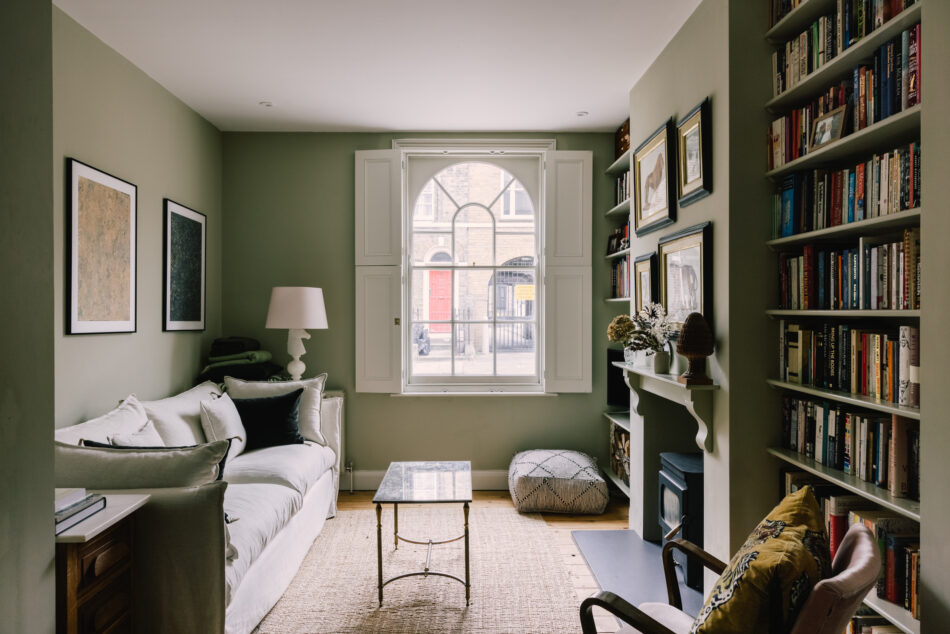 This enchanting Grade II-listed two-bedroom house lies within the desirable Tredegar Square conservation area on Aberavon Road. Laid out over two stories, the house extends over 950 sq ft internally and has a private garden. It has been sympathetically refurbished by the current owners to create an interior suitable to modern life whilst respecting the historic sensibility of the dwelling, and the area itself.

Positioned on Aberavon Road, just north of Mile End Road, the house represents the archetype of the East End vernacular. Laid out along at the same time as nearby Tredegar Square by Welsh politician Sir Charles Morgan in 1828, the area’s quiet streets take their namesakes from Welsh towns and villages.

Entry on the ground floor leads into a hall with a carpeted staircase and guest cloakroom to the rear. To the left is a double reception room in a neutral grey-green palette with a wood-burning stove, both the hearth and heart of the home. An arched window framed by white shutters lets in plenty of natural light, with simple floorboards and built-in shelving completing the space.

To the rear of the house, there is a bespoke kitchen designed by deVol with a herringbone parquet floor underfoot. An open shelf runs the length of the kitchen; the current owners have a selection of objets d’art lined along here, but it would work equally well as simple kitchen storage, or perhaps could be home to some trailing greenery. The bespoke cabinetry is painted in Farrow and Ball Studio Green with brass hardware and an engineered wood worktop. A skylight illuminates the neighbouring dining area which looks out onto the garden at the rear and back towards the front reception room.

Ascending to the first floor, the two bedrooms lie at the front of the plan. These both retain their original character and benefit from refurbished sash windows. Again, they have been decorated using simple tones, working as a brilliant backdrop for a variety of decorative choices. The atmosphere is one of refined quietude; a peaceful retreat from the hive of activity that is the East End. A traditional bathroom in beautiful neutral hues can be found to the rear, with Aston Matthews hardware used throughout. A cast-iron radiator – one of several in the house – warms the space. The house has been completely replumbed in recent years.

The garden lies behind the house and extends over 47ft. Decking extends across the whole space and maturing herb beds of lavender, rosemary, mint, thyme and bay lie either side, along with a plum tree.

This part of Hackney has a wonderful sense of community and is a particularly engaging part of London’s East End, with recent additions such as Mae + Harvey to be found alongside more traditional street markets. Whole Fresh, an excellent family-run greengrocer, is just across the road, and the nearby Roman Road Market runs three times a week. Established in 1888, the market survived the influx of covered shopping centres in the 1970s and continues to thrive as an east London staple.

Independent pubs The Morgan Arms, The Lord Tredegar and The Coborn are all within a five-minute walk from Aberavon Road. Victoria Park, home to the Pavilion Café and Chisenhale Gallery, is a circa ten minutes walk. The neighbouring Victoria Park Village has a wonderful selection of food and drink, with the Ginger Pig butchers on Lauriston Road, Bottle Apostle, and Jonathan Norris fishmongers. There are some excellent pubs and many lovely parks. The Regent’s Canal connects Victoria Park to Mile End Park and further east is the Queen Elizabeth Olympic Park.

Please note that all areas, measurements and distances given in these particulars are approximate and rounded. The text, photographs and floor plans are for general guidance only. Inigo has not tested any services, appliances or specific fittings — prospective purchasers are advised to inspect the property themselves. All fixtures, fittings and furniture not specifically itemised within these particulars are deemed removable by the vendor.
Aberavon Road — London, E3
Interested? Let’s talk