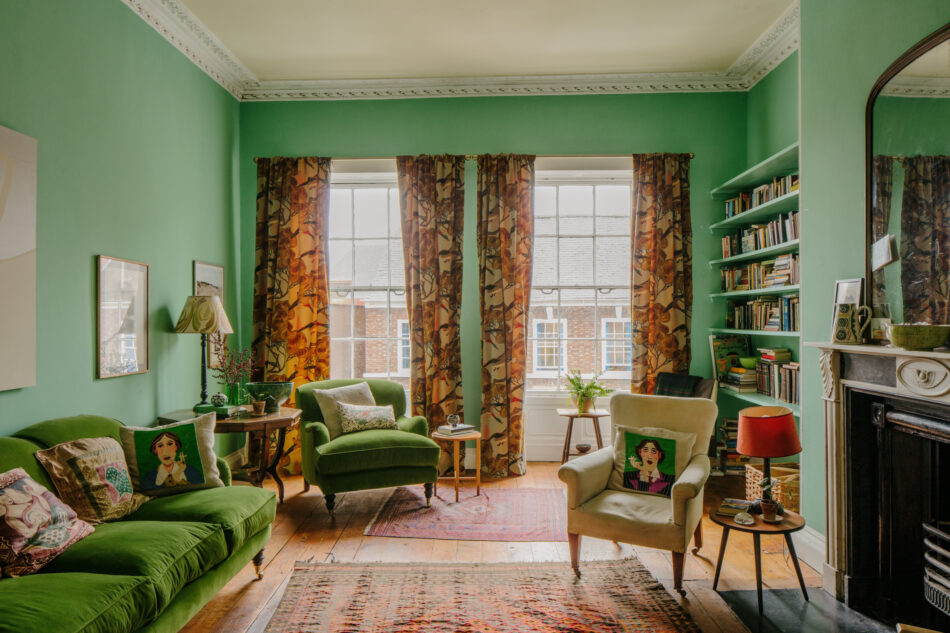 Set on one of the oldest streets in Carlisle, the house abounds with Palladian features

Built in 1760, this wonderful five-bedroom Grade II*-listed Regency townhouse is positioned at the edge of the River Caldew in Cumbria. Set on one of the oldest streets in Carlisle, the house abounds with Palladian features, accentuated by a considered colour palette that flows throughout the house. Arranged around a courtyard garden, the house unfolds over nearly 5,000 sq ft across four floors, including workshops, studios, and a large cellar. The courtyard garden flourishes with mature plantings, herbaceous perennials, fruit trees and shrubs.

Abbey Steet was built during the 18th century during a period of exponential growth for Carlisle due to the Industrial Revolution. Arranged along the ancient approach to Carlisle Cathedral, the house’s striking late 18th-century exterior elevation is set back from the quiet road behind a wall and iron railings. Contrasting quoins accent the ochre-painted, rusticated stucco façade on a chamfered plinth. For more information, please see the History section.

The house is accessed through the panelled front door with a radial fanlight set in an open pediment doorcase with dental motif and ionic entablature. Entry is to a beautiful reception room with high ceilings and intricate moulding. A muted colour palette allows the original features to sing and means the room is cosy, despite its ample proportions.

On the left is a second reception room, currently used as a music room. The same high ceilings continue here, and the room is flooded with light drawn in from a pair of expansive sash windows overlooking the street. The intricate moulding and ceiling rose have been lovingly restored. As the name of the room implies, music is the focus in this part of the house, and as such, an alcove has been created among the former architrave doorway honing the acoustics for at-home performances.

A concealed door in the alcove leads into the panelled dining room. Painted in a striking tone of ‘Churlish Green’ by Farrow & Ball, contrasting playfully with a pink marbleised fireplace, built-in cupboards create storage for crockery and glassware. A hallway, painted chrome yellow, leads onto a utility room and WC.  A kitchen on the opposite side of the plan is painted in a cosy shade of umber. It has a cream Aga complete with a separate gas range, and another vast sash window illuminates the room. Open shelving creates storage, and, in some sections, the lower half has been finished in cream butt and bead panelling, creating a wonderful contrast with the wall colour.

A curving, dramatic stairwell at the rear of the plan is illuminated by a double-height window set in fluted architrave, with sweeping views over the courtyard garden. Painted in tones of duck egg with ‘Teresa’s Green’ by Farrow & Ball, a pair of recesses on either side of the large window add drama to the space.

On the first floor, at the front of the plan, is a drawing room. Painted in tones of ‘Green Verditer’ by Little Green Paint Co, it has built-in bookcases and a superb original fireplace and grate. The large primary bedroom is also at the front of the plan, with further large sash windows overlooking the street. Papered in a deep cerulean blue tone, accented by white cornicing and moulding, the room has its original marble fireplace. Behind the drawing room, there is a further bedroom and a large bathroom.

A studio area at the back of the plan was once an independent building at the rear of Abbey Street but has been joined by a passage. Terracotta pamment runs underfoot on the first floor. Original stone slabs suspended by steel beams have been left exposed; reputedly a former County Registry & Records Office, the omission of timber from the structure rendered it far more resistant to fire to safeguard important documents. Windows in this room overlook the charming garden on both sides.

A smaller stairwell at the opposite side of the plan ascends to two garret bedrooms and an office or storage space. In both bedrooms, lime plaster creates an intimate feel, and in the office, there are the original hatches used to clean the warren of chimneys in times past. A large cellar is accessed from the hallway on the ground floor.

To the rear of the plan, the old stables are in the process of renovation. With separate access to the lane behind, this space would make an excellent standalone study or guest accommodation.

To the rear of the house lies a terrace garden with mature shrubs and herbaceous perennials. The exterior aspect of the former records office and the arched landing window create a striking backdrop. Despite being in the centre of a bustling city, the terrace garden remains peaceful and removed, creating a quiet and secluded oasis away from the hustle and bustle.

Carlisle is a bustling city in easy reach of stunning countryside, with excellent transport links to London and Edinburgh. Rife with historic architecture, the town offers a variety of amenities, all within walking distance.  The Tullie House Museum nearby houses collections of fine and decorative art, history and natural sciences, as well as hosting a wide range of exhibitions and events. Carlisle Cathedral is a short walk up the street and a Grade I listed monument. Carlisle Castle, also within walking distance, has been continuously occupied since its foundation by William II in 1092.

The popular local haunt Alexandros Greek Restaurant and Deli is nearby, and excellent Sicilian food can be found at Amato’s, a short walk away. Bookends, a bookshop set in a rambling 5-storey Georgian building with attached café Cakes & Ale locally known for the quality of their cheese scones, is a great way to spend the afternoon – they also host a series of literary events throughout the year. Vinyl Café is a place to peruse and test-play records while sipping some of the finest locally roasted coffee. Yellowjackets cocktail bar is the vision of Carlisle-born Cameron Ellis, who fell in love with the art of cocktail making while travelling and working in New York and Paris, bringing his experience back to his hometown. The Lounge on the Green in Houghton (a short drive away) is a firm favourite, with newly acquired Michelin Star.

Daily amenities, including supermarkets, are easily reached in town. The nearest Waitrose is a 20-minute drive in Gretna.
Carlisle is ideally situated for easy access to the motorway network, with the M6 only a few minutes away. Newcastle Airport is a scenic one-and-a-quarter-hour drive across Hadrian’s Wall. Carlisle station runs direct rail connections with direct trains to Manchester and Manchester Airport, Glasgow, Newcastle and Whitehaven.

During the Roman era, Carlisle was the northernmost city of the Roman Empire and contained the largest fort on Hadrian’s Wall. In 1122 an Augustinian monastery was established by Henry I, which later became Carlisle Cathedral.

Carlisle Castle was built around 1093, once holding Mary Queen of Scots as a prisoner. The dissolution of the monasteries saw the area around the cathedral, and what is now Abbey Street fall into disrepair. During the English Civil War, stone from the nave was taken and used for repairs to the nearby castle.

In the 18th century, the city grew as an industrial hub. This boom in industry meant turnpikes, canals and railways were constructed, as well as many of the buildings that make Carlisle so beautiful today. The Georgian houses that line Abbey Street today sprung up along this ancient thoroughfare.

Though little in the way of records can be found about the house, it is thought that the original Georgian house was used as the County Registry & Records Office and adjoined to the Victorian building at the rear at a later date. The house as it stands today is a testament to the city’s changing fortunes.