On Display: how Arts and Crafts cross-pollinated Poland

‘Young Poland’, a new exhibition at William Morris Gallery in Walthamstow, explores how 19th-century ideals of beauty captured the imagination of optimistic artists working in a besieged corner of Eastern Europe, resulting in tradition-led movement of its own 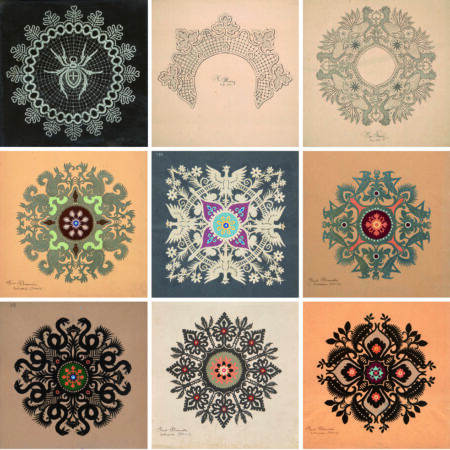 In the late 19th century, something wonderful was happening in Eastern Europe. Across vast landmasses, artists who’d never met were engaged in conversation, speaking to one another through their work and their shared belief in the value of beauty. Young Poland, William Morris Gallery’s current show, explores these cross-cultural encounters, created through not just a set of aesthetic beliefs but a set of ideological sensibilities for everyday life, which argued that everybody, irrespective of their social or financial status, deserved to live a life filled with beautiful things.

Young Poland as a movement emerged in the 1890s, in the years when Poland itself did not exist. Its neighbours in Russia, Prussia and Austria had divided up the country and its name disappeared from the map until 1918. However, geography aside, Poland’s heart was still beating and the members of this movement were filled with optimism for the country’s future, rooting themselves in the preservation of past traditions and national identity, harking back to folkloric traditions. Sound familiar? Similar things were going on in England, under the discerning eye of William Morris, whose Arts and Crafts objects and intricate wallpaper designs sought to counter the rapid industrialisation of Britain and remind the nation of the exquisiteness of the handmade, which was being overshadowed by the dark satanic mills of mechanical reproduction.

Poland was also being robbed of its identity; not by industrialisation, but by neighbouring countries seeking to erase it entirely. Originating in the southern city of Kraków and the nearby village of Zakopane, at the foot of the Tatra mountains, the movement shone a light on the beauty of traditional forms of living. This new exhibition seamlessly links two cultures united in their resistance to erasure and their belief in the equal value of all forms of art: sculpture and painting, paper cuttings and wooden craftwork, Christmas decorations and stained glass.

The exhibition’s main focus is the work of Stanisław Wyspiański, considered to be Morris’ counterpart. Wyspiański’s designs are the electric and nervy match to the elegant charm of Morris’ – Wyspiański’s floral sketches are cosmic rather than familial. Like Morris, he was an artist working across multiple mediums. The stained glass window Wyspiański designed in 1905 for the Medical Society in Krakow, Apollo: Copernicus’s Solar System, has been reproduced by master craftsman Piotr Ostrowski for the show. In it, fragments of deep blue and emerald diffract light into bursts of jewelled brilliance. Apollo, as god of the sun, not only embodies it but allows its rays to pass through him, landing upon us in a thousand tiny shards.

The work of another Zakopane-based artist called Karol Kłosowski, arguably the last Young Poland artist, is also explored in the exhibition. He was a prolific sculptor and woodcarver, painter, textile and furniture designer, and paper cutter, whose work often celebrated the intricate handcrafts of women, such as lace. Maria Pawlikowska-Jasnorzewska, whose visual work has largely been overlooked in favour of her writing, meanwhile, used her bold and intimate paintings to consider the question of women’s role in society. In Self Portrait with Elf, she paints and reimagines her second husband, Jan Pawlikowski, as a minuscule fairy figure with angelic wings; she depicts herself as self-assured, even ironic, as she looks down lovingly at her husband who kneels on the back of her hand. In another painting, the roles are reversed, with her husband’s profile dominating a universe of planets and stars behind him. His hands are cupped around a naked couple, dripping in gold, entwined in an intimate embrace with eyes looking up to the light of the stars.

These are just a handful of more than 150 works on show, which span almost every medium imaginable. Most of them have never travelled outside of Poland. By bringing them to this particular part of London, which has been inhabited by significant Polish communities for nearly two centuries, we’re invited to explore and appreciate the rich cultural heritage of a country that has long been in conversation with Britain.