Local’s View: our tour of Chelsea and Pimlico Road

In the first of a new series, Inigo takes readers on a guided tour of our favourite haunts in the UK. Digging out our little black book, we’ll be sharing our best-loved food hangouts, architectural highlights and unmissable shopping spots to boot 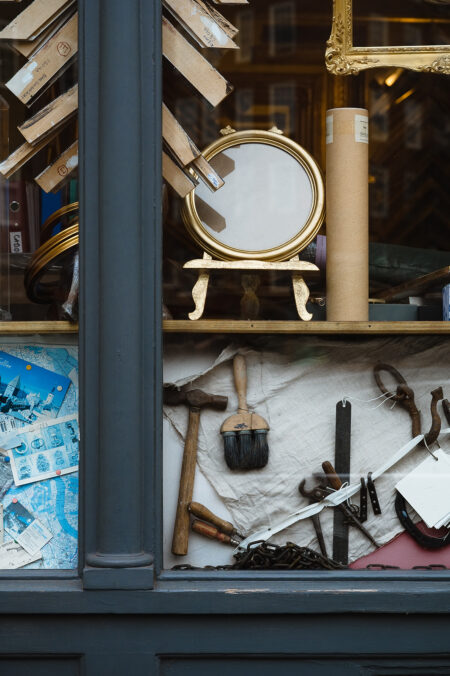 It all changed for Chelsea in 1975. Vivienne Westwood and Malcolm McLaren’s celebrated Sex boutique may have still been selling torn t-shirts, rubber dresses and spiked stilettoes ­­at number 430, King’s Road, but in less seditious circles, a new kind of icon was emerging: the Sloane Ranger. The creation of Peter York and Ann Barr in Harpers & Queen, these girls in pearls, with their penchant for ponies and pie-crust collars, were by the 1980s a ubiquitous social stereotype in SW3.

While silk scarves and hairbands may be having another moment, the association of the area with such posh totty was an unfairly malign alignment ­­– and we’re here to help rectify it. Taking Sloane Square as our starting point, we’ve combed the quarters, stretching our legs up the length of the King’s Road, turning south, down to the river, north towards Knightsbridge and Fulham Road and even ­sticking our noses into Belgravia, a few minutes’ walk from Sloane Square tube. Yes, we know Pimlico Road doesn’t strictly count, but how could we not? It’s only round the corner…

Royal Hospital Chelsea, Royal Hospital Rd, London SW3
It’s impossible, Inigo believes, to stand in one of the quiet quadrangles of the Royal Hospital Chelsea, taking in its velvet lawns and robust red-brick façades, and not feel a hushed sense of awe. Look carefully and you might spot a Chelsea Pensioner decked up in a startling scarlet coat and wandering the colonnades. Founded in 1682 by King Charles II and designed by Christopher Wren, this is a stupendous example of social civic architecture on a grandness of scale that feels quite alien today.

Crosby Moran Hall, Cheyne Walk, London SW3
Crosby Moran Hall, perhaps the most important surviving domestic Medieval building in London, certainly merits a mention. It was originally built, confusingly, in Bishopsgate in 1466, but by the Edwardian period it was sticking out like a sore thumb in the increasingly modern City, hence its move to these more sensitive surroundings in 1910. It’s been changed and added to over the years, but at its heart is the Medieval Great Hall, part of the original mansion belonging to Sir John Crosby, a magnificently wealthy merchant and political figure. Since then, it has housed Thomas More and the rather more insalubrious Richard III, who lived here when his two nephews disappeared in the Tower of London. Now it’s home to Christopher Moran, who has spent 23 years planning, restoring and rebuilding it. For the best view, cross nearby Battersea Bridge and look across the glinting Thames.

Famous faces in pretty places
If spotting a Blue Plaque gives you the same bookish thrill as it does Inigo, look no further – this part of London is nonpareil. There’s Brunel, Bob Marley and Bond (or Ian Fleming, at least); Samuel Beckett and Captain Scott. It might be cheating to linger on Cheyne Walk, but a list of former residents of this street’s big and beautiful houses – set back from the main road and overlooking the river – reads like the guest list to the most amazing cocktail party. There’s Mick Jagger and David Lloyd George, Sol Campbell and Elizabeth Taylor, with many more great, good and glamorous in between (even if they don’t all have plaques): Bram Stoker, Pugin, Dante Gabriel Rossetti and not one but two Eliots – novelist George and poet TS. We’d like an invitation.

Pimlico Road, London SW1W
Name a finer destination for decorators to splash a bit of cash and we’ll eat our feathered cap. In Georgian times, skirmishes would break out in the queues for the famed Chelsea Bun House here, but by the 1960s, bric-a-brac rather than baked goods were the stock in trade, a rash of raffish antique dealers having set up shop, making the most of cheap rents. Oh, how times have changed – though the wares available here today are just as wondrous, if a little more refined. It’s less a question of where to start than where to stop: Jamb, Howe London, Chelsea Textiles, Fermoie, Rose Uniacke, Soane Britain. We could go on…

Robert Kime, 190-192 Ebury St, London SW1W
You could almost hear the moans from Museum Street when Robert Kime closed his doors there. Further cries were heard when the Kensington Church Street outpost ceased trading. Thankfully, though, the king of killims wasn’t shutting up shop forever. Now, his treasure trove of trademark rugs and ruched lampshades, fabrics and furniture can be found on Ebury Street, which is all the richer for having Robert here.

Chelsea Green, London SW3
A miniature village of its own, Chelsea Green is a small triangle off Markham Street, a King’s Road tributary. You’ve everything you need here for a very nice life indeed: there’s The Real Flower Company, whose zinc-bucketed offerings are blooming marvellous; Alec Drew, who can frame anything from a school photo to a masterpiece; Paxton & Whitfield, whose cheeses are the finest in London (and have been since they were appointed cheesemonger to Queen Victoria in 1850). Andreas the grocer’s seasonal offerings are sublime – artichokes the size of your head and figs that would make Nigella blush – while for laughs, langoustine and more, head to Rex Goldsmith, the Chelsea Fishmonger. His Instagram bio tells you all you need to know.

Daylesford Organic, 44B Pimlico Rd, London SW1W
Those weary from a day of swatch sampling on Pimlico Road should stop by Lady Bamford’s farm-shop deli. Of course, this isn’t your average farm shop – we’re in Belgravia, for starters, and eating off marble tables. Victuals here are vibrant. Expect house-cured gravadlax and pizzas with black ibérico tomato and buffalo mozzarella, with cocktails and cold-pressed juices to wash them down.

Villa Mamas, 25 Elystan St, London SW3
Don’t be fooled by the red bistro awnings of Villa Mamas, or its Italian name, for that matter. Step inside and you’ll find yourself transported to the Middle East by the splendid suzanis hanging on the walls and the Persian-esque aromas floating from the kitchen. Halfway down Elystan street, this chic eatery is the brainchild Roaya Saleh, who runs a restaurant of the same name in her native Bahrain. Those au fait with Gulf gastronomy will find familiar favourites – rich hummus and lamb shanks that manage to be both bold and tender at once – along with more unusual offerings, including kaskhe bademjoon (“Eggplant Explosion”).

Rabbit, 172 King’s Rd, London SW3
“Farm to fork” is the ethos powering Rabbit. Sister restaurant to The Shed in Notting Hill, it’s a family affair run by the Gladwin brothers: chef Oliver, maître d’ Richard and farmer Gregory – a trifecta of rugged soil-lovers who bring the best of Sussex and plate it up in SW3. With lots of raw wood on show – tables, benches, bar – it’s just the right side of bumpkin, thanks in no small part to the phenomenal seasonal and often foraged menu. Ears pricked and nose twitching at the sound of it all? Hop to it.

Chelsea Physic Garden, 66 Royal Hospital Rd, London SW3
Four acres of horticultural heaven in the middle of town, the Chelsea Physic Garden is one of the oldest botanical gardens in Europe – and the second oldest in the UK after Oxford’s. It was founded in 1673 by The Worshipful Society of Apothecaries of London for the study of medicinal plants, its position on the Thames Embankment affording it something of a microclimate, with the warm air currents that swirl up from the river. Today, medicinal and edible plants are joined by exotic species from around the globe – and a jolly good café.

Saatchi Gallery, Duke of York’s HQ, King’s Rd, London SW3
Originally in St John’s Wood, the Saatchi Gallery moved to the heart of Chelsea in 2008. While it’s known for its strikingly contemporary (and often conceptual) exhibitions, there’s much more to the place that recommends it to Inigo. Not only is it an exquisite show space wrapped inside a neoclassical former barracks building constructed in 1801, its other displays are often worth a visit. The breathtaking Tutankhamun in 2019 particularly sticks in our memory.

Cadogan Hall
Jazz or chamber music? Symphonies or bossa nova? Whatever their taste, all will find something to entertain at Cadogan Hall. There’s a reason this 950-seater is a prime Prom spot – it’s a wonderful, theatrical space and the acoustics are sublime, thanks in part to the building’s history as a church – built in Byzantine Revival style in 1907, it was refurbished as a concert hall in 2004. Special mention goes to the stained glass, the handiwork of Danish artist Arild Rosenkrantz.