For the Library: bohemians, bourgeoisie and the built environment – how architects helped shape the modern artist in Britain 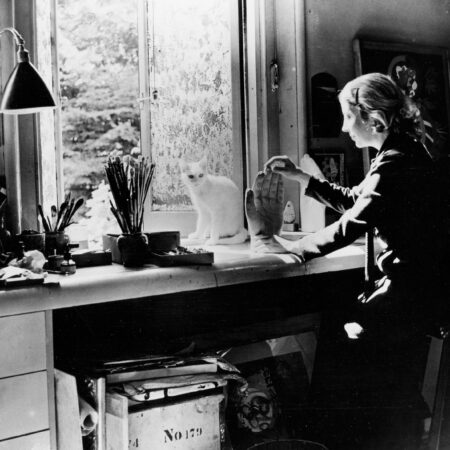 The painter cannot paint nor the sculptor sculpt without a studio – at least some of the time. And yet, the image of the bohemian artist – peripatetic, painting en plein air, a whiff of debonair dishevelment adding to that of turps and charcoal – is a well-known one. It’s also, in many cases, often a self-consciously constructed one.

From the perspective of the free-spirited artist, the idea of the studio is orthodox. It is the factory, the laboratory and the office – and it is the built antithesis to this (fabricated) life on the road. But even Augustus John, that most unconventional of painters, had, on occasion, to rely on such orthodoxy. He may have put out that he was eschewing the studio – “a box wherein miserable painters hide themselves,” he wrote – in favour of a caravan, but in fact, as Louise Campbell, author of Studio Lives, tells us, he built two of them. They informed his life and shaped his art.

This handsome book starts its story at the tail end of the 19th century, when fin-de-siècle Britain was awash with bourgeoisie artists who had begun to actually make a decent living, thanks in part to the cult of personality that was gripping the Victorian psyche. They needed places to work and they had the money to build them. It’s bookended by the Second World War, with fascism on the rise. The years that followed would radically alter both the artist’s reality and the built environment for decades to come.

The turn of the 20th century saw the concepts of artists and studios transmogrified. As architects were commissioned to build purpose-built studios and studio-dwellings, artists’ houses became more than just homes, instead transformed into nexuses of creativity, incubators and kitchens of creativity.

Some of the 13 case studies in this lavishly illustrated book are perhaps unsurprising (Augustus John in Chelsea and Hampshire; Winifred and Ben Nicholson in Cumbria; Barbara Hepworth with John Skeaping in Hampstead), some less so: Eileen Agar is in there, as is the pioneering, pipe-smoking Gluck and the studio designed for her, again in Hampstead, by Edward Maufe and his wife, Prudence. The aptly-named stained-glass artist Henry Payne has a chapter to himself and his devotion to creating work as beautiful as the Gloucestershire valleys in which he lived. This was a man for whom the boundary between world and workshop were blurred.

What saves this book from being just an overview of select artists and their surroundings is the attention paid to the architects involved in the creation of these spaces. Architectural history – from the moralism of the 19th century to the hopeful flushes of 1930s modernism – is used as a convincing framework for the dialogue between architects and artists (many of whom made intensely demanding clients), both of whom were using these spaces in different ways to reflect their visions of the world. This is a book about creativity and compromise, and one that makes a cogent argument for the power of architecture to shape us all (not that we needed convincing…)