Dropping By: the bright young things bringing a modern manner to their Georgian country pile

Robert Sheffield and Ellen Francis are slowly transforming their 18th-century house, Sutton Park, into a family home fit for today. Join them for a day, courtesy of our latest film 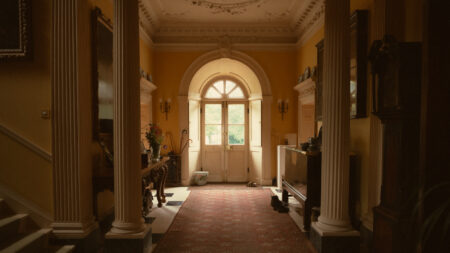 What’s the future of the English country house? A trip to North Yorkshire’s Sutton Park – home to art advisor Robert Sheffield, his partner, actor Ellen Francis, and their daughter, Clementine – is a riotous reminder that there’s a new generation of custodians in town. For while this busy, buzzy young couple have left much of Robert’s family pile untouched (and thank goodness for that – there are still original 1950s schemes here by decorating doyen John Fowler), they have also been working out their own way of making a mark on the place.

“It’s a very grown-up house for people like us,” says Ellen when we visit the handsome Georgian red-brick. “Our job has been trying to make it work for us, today.” Robert’s arresting collection of contemporary art has, naturally, played a big part in their efforts. Among portraits of stern forebears now hang abstract oils. Against the drawing room’s exquisite chinoiserie paper hangs a photograph of a naked man. Walk into the dining room and, in the corner, you’ll spot a tiny retro television (an installation work, rather than granny’s old set, natch).

But these powerful, provocative and at times challenging pieces are, says Ellen, more apposite that most might think. “When this house was built, in 1750, the younger generation would have brought back new artworks from Europe, which might have shocked their parents. This is our 21st-century equivalent,” she adds. “This house is really a collection compiled over time. Robert’s grandmother did it with tasteful porcelain; he’s doing it with avant-garde art.”

Ultimately, however, this is a family home: a happy place for Clementine to grow up and play in, one for friends and fun. Ellen’s eyes twinkle when she recalls the parties they’ve had here, for grown-ups and littluns alike – equally rowdy, she adds, albeit in different ways.

All this and more we learned when we spent a day at Sutton, walking through the grounds with these bright young things. Join us, why don’t you, by watching our film. And, before you go, make sure to subscribe to our nascent YouTube channel – that way, you’ll never miss an instalment.