A Home with a History: Charles and Romilly Saumarez Smith’s art-filled 18th-century townhouse

Inigo steps inside the artistic couple’s Mile End home, where authentic period details are brought to life through inspired creativity. 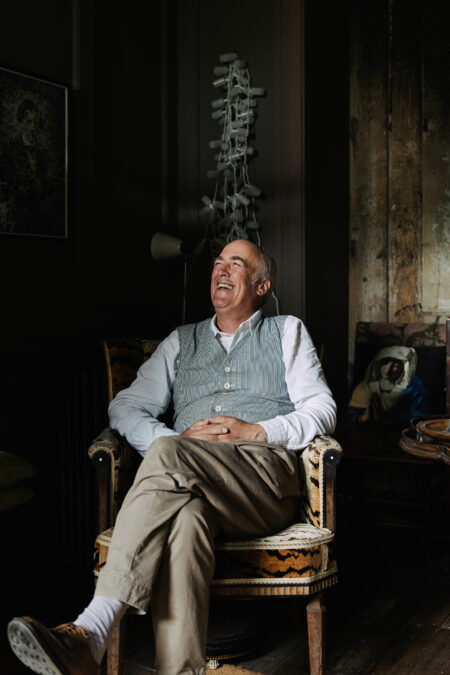 The phrase “lovingly restored” doesn’t quite do justice to the magnificent home of Charles and Romilly Saumarez Smith. Bought in the late 1990s from conservationist charity The Spitalfields Trust, it’s a Grade II listed Georgian building that, when the couple first chanced upon it, had not been lived in since the 1870s. “It was this completely unreconstructed 18th-century house that had not been modernised in any way,” says Charles, a writer, curator and art historian who, we’re proud to say, is also a founding member of Inigo’s Guild. Getting the house to its current state, he says, involved a lengthy renovation process, in which Romilly, an artist, bookbinder and jeweller, worked closely with the Spitalfields Trust to bring new life to the space while retaining as much of its original carpentry and features as possible.

Contrary to standard contemporary practice, there was no architect involved in this process. Instead, a team of builders, joiners, carpenters and craftspeople worked on the house piece by piece, much as they would have when it was first built, in the early Georgian period. At the same time, Romilly found ingenious ways to reinterpret the house’s character and atmosphere through its richly textured interiors, in which carefully curated artworks from all eras are offset by antique furniture, a rich colour scheme and patches of wall that have been left deliberately unfinished, to reveal every layer of the building’s history. Below, Charles and Romilly tell us more about how they made this imposing example of 18th-century architecture into a contemporary home tailor-made to suit the evolving demands of their shared life and work.

Romilly: “This house gives me great visual pleasure all the time.

Charles: “It’s nice living in a house that hasn’t been modernised. What Romilly did was to keep as much as possible of the original atmosphere. But she didn’t go about it in an archaeological way; she went about it in a creative way, using modern things, like the hanging lights made out of film canisters in the drawing room.”

“What I like about a house is its accumulation… in the end, I think it makes things more interesting.”

Romilly: “The story behind those was that I was in Brick Lane – ages ago now – and a shop had these strung up as Christmas lights. I got them home and I couldn’t untangle them – it was too annoying. So, I just hung them up as they were and they worked really well. We got another pair and they’re very much a part of the sitting room. I always think of them as the modern version of [the 17th-century master woodcarver] Grinling Gibbons.

“I think the other thing that’s become quite important in the house is it’s become a home for my grandfather’s furniture. He was a furniture designer and interior designer, he designed the tiger chair that Charles sat on for the Inigo photographs, as well as the dining room chairs and a table in the corner in the dining room. Then upstairs as well there are more of his chairs and a dressing table.

“The tiger chairs were a nice story. When we got them they were in a really parlous state: they had been designed in the 1930s and I didn’t know how we were going to cover them again. I saw an article in an interiors magazine about animal skins made of textile and there was the exact same material that was originally used on the chairs. It turned out to be made in Venice by a company named Bevilacqua, who still make it as it was originally designed in 1830. The fabric cost more than you possibly imagine, but it was wonderful that we were able to restore them.”

“The house has been developing an ecology – it was used in one way, and now it has been successfully adapted into being used in a very different way.”

Charles: “ I like that the house has archaeological layers between the original and the preserved, and then the revitalized.

“When we bought this house Romilly didn’t have MS and then, quite soon after, it was diagnosed. There was a time when we were worried that it wouldn’t be possible to remain because there are stairs everywhere. At that point we worked with the architect John Robins to adapt it by putting in what I considered the only 18th-century lift in London. It’s not 18th century of course, but it is encased with barge boarding to fit with the character of the house.

“And strangely and by coincidence, because the house is early rather than late 18th century, the doors are quite wide: enough to take a wheelchair straight through. This is very significant for us, obviously. Because Romilly particularly has had to change the way that she uses the house. And I like the fact that it’s been like this, developing an ecology, where it was used when we bought it in one way and it has successfully adapted into being used in a very different way.

“Until about six months ago I was, out, working most of the time, so actually, in 2020 I’ve spent far more time in the house than I have in the previous 20 years. I’ve got this room at the back, which in theory I worked in, but which I never actually did.

“Now, because I’m here so much more, I’m using the house much more intensively and I’m using the room originally designed as a library to work in, which has given me great pleasure. Because previously it was just a mess… I mean it’s still a mess, but now it’s a used mess rather than just a pure mess!”

Romilly: “What I like about a house is its accumulation. It’s also a curse, but in the end, I think it makes things more interesting than just minimalism. Minimalism works fine, but I always think: ‘what happens to all the memories?’”

Romilly Saumarez Smith’s recent work is on display as a part of Gathering at MAKE, Hauser & Wirth in Somerset from 21 November 2020 – 27 February 2021

Charles’ latest book, The Art Museum in Modern Times, will be published by Thames & Hudson in March 2021.