A Place Like No Other: a walking guide to Bath, in the footsteps of Peter Smithson

Inigo’s co-founder reacquaints himself with the delights of one of Britain’s most beautiful historic cities, guided, rather impatiently, by the writings of the influential brutalist architect 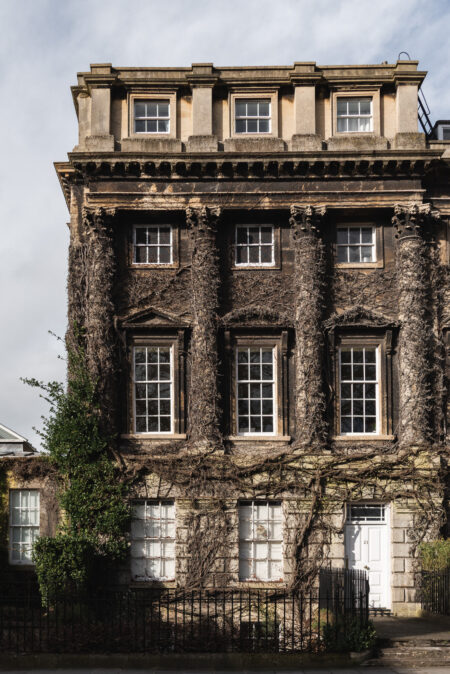 The charms of Bath are hardly difficult to find but it is still a surprise that the man who illuminated them best was most well known as a Brutalist. Peter Smithson and his wife Alison were pioneering mid-20th century architects who coined the term ‘New Brutalism’, created a “House of the Future” that shocked traditional society, and designed perhaps Britain’s most uncompromising concrete housing estate, Robin Hood Gardens.

Yet these achievements have blinded many to the couple’s obsession with the lessons of the past, something which is eloquently expressed in Peter’s love letter to Georgian Bath, in his book Walks Within the Walls – a series of annotated walks which share his impassioned thoughts about the historic city.

On a beautiful spring day, I took Smithson’s small book to Bath and trod in his footsteps, seeing the city through his excited eyes. Although the walks were first created by Smithson in 1966, to my delight I discovered that almost all of what he was marvelling at was still there. Indeed the only evidence of change I could find was restoration – where he tutted at the “detailing chipping off [the houses on Laura Place] like boxwood”, today it all looks as good as new.

I undertook the walk alone, as Smithson advises in his introduction. He grudgingly accepts that one might do the walks with “one other person” but insists that if this is the case “one should not talk” as “the reverie that Bath can induce is an important part of the lesson”. Talking today to the artist Soraya Smithson, daughter of Peter and Alison, she acknowledges that “we are not known as a particularly talkative family”, pointing out that “if you are talking you aren’t looking”. She was only two when Walks Within the Walls was published but was steeped in her parents obsession with historic architecture from a young age so was well aware of the book. “We often used to have family slideshows of things like the architectural details of Bath’s houses” she recalls, “as a child you accept things as normal, even though other families would probably be having very different evenings!”

Soraya’s brother Simon Smithson, an architect like his parents, insists that Walks Within the Walls was a “a very personal undertaking for my father” and recalls him heading off to Bath on the train from their home in London “always, it seemed to me, in rather inclement weather” to work on it. “As you read the text”, Simon advises those undertaking the walks “imagine him ‘umming’ and ‘ahhing’ aloud to himself as he uncovers the sheer genius of those who sculpted Bath”.

So it is that I find myself among the “decent snuff-coloured” buildings of South Parade with book in hand setting off on ‘Walk One’. The first thing Smithson wants us to admire is an obvious one, the name of the intersecting Duke Street, cut lovingly into the stone. It’s a detail that you can see across the city and an example of what Smithson calls the “relics of sophisticated taste, of love and energy applied to ‘trifles’ in nowhere places”.

Starting off on South Parade is entirely significant for Smithson, for it is here that you find what he describes as “the widest pavement I know” . One of the things he loves best about the streets of Bath is that they are a celebration of the perambulator. He wants to make the point that while the car might dominate, and sedan chairs may be a thing of the past, we can still revel in our cities as “places for walking” and there is no better place to do so than Bath “where ordinary day-to-day living was given the attention and love that was elsewhere devoted only to the glory of the state”.

Smithson enjoys the tranquil back streets of Bath as much as the grand set pieces. There is a pause for breath, for instance, at Abbey Green – “here under this tree with the world shut out” – before heading back out towards the drama of the river and Pulteney Bridge.

Interestingly, Smithson declines to comment on the bridge designed by Robert Adam despite it being one of Bath’s best known features. Indeed Great Pulteney Street, also firmly on the tourist trail, is dismissed as merely a route rather than a street, “it is difficult to pause, one longs to escape” he writes. However Sydney Place, at the end of Great Pulteney Street, has him in raptures. “This is architecture” he writes, in emphatic italics, swooning at the “sweeping of the suites of horizontal mouldings”.

Entering Sydney Gardens, “the walk now goes as quickly as possible – drawn like Orpheus into this other world”. This is the world along the canal, a world of impressive bridges (nowhere else in the world are bridges so vital to the architectural spectacle of a place as in Bath), exquisite masonry and, it has to be said, clusters of tottering daytime drinkers.

One of the notable things about Smithson’s directions is their urgency: while we are encouraged to look, we are never encouraged to linger. There is always the sense that there’s so much to see around the corner. Soon, then, he is urging us to “walk as quickly as you can up the hill” to Lyncombe, an area of Bath that he describes as “rus in urbe”. Indeed “the way the countryside comes into the town”, the way that you get “actual clear sight of fields and trees at the end of urban views” is one of Smithson’s chief reasons for so admiring the city in which he was, for many years, a visiting professor.

After a brief exposé of some of the less glamourous rear elevations of Bath – “the Bath architecture that tourists come to look at is fronts and ends – the backs are a mess” – we arrive at the “extraordinarily nice” Widcome Terrace. Indeed, I was a little overcome myself by this incredible, if humble, arrangement of houses. “Original, civilized and beautiful” was Smithson’s summary, with which I can only wholeheartedly agree.

From here we go on past some “very liveable” houses to “the undoubted masterpiece of Bath”, Royal Crescent. Nearby The Circus (my personal favourite) is, he says, also a masterpiece, although “a slightly lesser one”. All the other architectural compositions in the city, he adds, are “somehow journeymen compared to these”.

At the Royal Crescent, for the first time, Smithson’s brisk prose slips as he seems moved to a verbosity which I won’t repeat in full here, other than to pick out his comment that the Crescent “is self-assured and complete in a way that makes Versailles appear arriviste”. Needless to say, I have admired the Royal Crescent many times over the years but never have I felt a more intimate appreciation of it than after reading Smithson’s inspired observations. Never before, for instance, have I noticed the neat group of three columns “that takes one round the corner” or many of the other features that escape untrained eyes.

Nearby Camden Crescent might not quite be a match for its Royal relation but it receives a lot of admiration from Smithson nonetheless. This is largely due to the fact that it’s built on a slight incline and, as he says, “going uphill seems to bring out the best in Bath masons”. What Smithson shows us is how “extraordinarily complicated” it is to create such a composed façade when actually all sorts of inconsistences and wedge-shaped stones have been manoeuvred to accommodate the slope of the land. It’s at moments like these that we realise Smithson has, as his children attest to, walked these streets hundreds of times and really drunk it all in so that he can give such perceptive direction to more illiterate ramblers like me.

One of the last places Smithson takes us to is a modest terrace that he describes as a “throwaway masterpiece”, St Mary’s Buildings. The threat of demolition of these “simply stunning” houses was what first prompted him to put together a set of walks celebrating Bath’s architectural heritage. Luckily St Mary’s Buildings still stands and Bath is still, as Smithson describes it, “the embodiment of the romantic-classical dream”.

Whilst many might be surprised that such a hard-headed radical had a soft spot for the dreamy appeal of Bath, we can be sure that it wasn’t just a one-off as in the Smithson archives there are still notes for similar walking books on the historic architecture of Cambridge, Oxford and Edinburgh. Given how much I enjoyed my Bath excursion, here’s hoping that one day someone turns these into books too.

Images, top to bottom: Sydney Place; a view down Bath street; cobbled alleyways near Bath Street; the side elevations of buildings on Great Pulteney Street; engraved signage at the intersection of South Parade and Duke Street;  the giant plane tree at Abbey Green; a view of Cleveland House over the iron bridge in Sydney Gardens; a detail of the stonework bridge in Sydney Gardens; Widcombe Terrace; The Circus; a detail of The Circus at Gay Street; an array of Ionic columns at Royal Crescent; the indefatigable St Mary’s Buildings.

(Available in a free interactive PDF version, or as a physical book, directly from the Museum of Bath Architecture. To order a copy for £5 inc. P&P email afrost@bptrust.org.uk)