A Private View: how painters Christopher Le Brun and Charlotte Verity redefined the art of living

Christopher Le Brun and Charlotte Verity’s Camberwell home is a reflection both of their exceptional careers as artists and their life as a family. As the house comes on the market, the couple look back on life in Love Walk 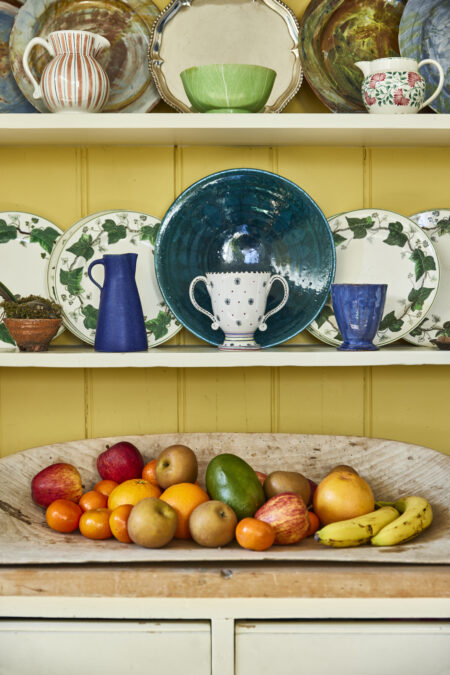 What’s in a name? To artist Charlotte Verity, rather a lot, it seems. She remembers in 1986, when she and her husband, fellow painter and one-time president of the RA, Christopher Le Brun, were looking for a house, speaking to an estate agent on the phone. “She rang me and asked: ‘Do you want to live on Love Walk?’. I said yes immediately,” Charlotte explains. “I had no idea what Love Walk was, or where it was, or anything. I just liked the sound of it. The words came out of my mouth before I realised what they meant.”

Cupid had struck and, happily, it was a match. In the intervening years the artists’ personal and professional lives have played out quietly against the backdrop of this handsome Victorian house in Camberwell, south London, which is now for sale with Inigo. Two of Charlotte and Christopher’s three children were born upstairs, while the garden – as well as hosting children’s cricket matches and summer parties – has been a source of constant inspiration to Charlotte, who paints in one of the house’s uppermost rooms. Christopher, meanwhile, works (and, when creativity calls, sleeps) in a warehouse 10 minutes’ walk away. Today, one of his vast colourscapes fills a large wall in the extension they built on to the back of the house in 1998, designed as a sensitive continuation of the original building, rather than a contemporary annexe. Their brief to architect Jamie Fobert, Christopher jokes, was simple. “I told him he needed to give enough space for me to hang a canvas so beautifully I could sell it,” he says with a twinkle, “to pay for the building work!”

The extension is, like the rest of the house, exquisitely done – airy and peaceful, overlooking a walled garden that even in the arctic chill of Inigo’s visit sang of spring. As they prepare to say goodbye to the house, Christopher and Charlotte reflect on their time there, where life and work have met – and married happily.

Christopher: “When we were looking, I saw a photograph of this house – it was a terrible picture – and I thought: ‘That’s it.’ It looked like the archetype of a house: double-fronted, with a gate and a path and a garden. Tick, tick, tick – everything we wanted.”

Charlotte: “We visited in the dead of winter. My first thought was it’s so pretty! And so big! I’d never dreamed we’d live in a house of that size.”

Christopher: “It was the scale of the rooms that captured me. We walked into the sitting room and I thought: ‘Ah, yes. I can imagine being here.’ The same was true of the study, and then the garden… The feeling just continued with every part.”

“It’s a classic south London Victorian villa. It was built in 1860, around the same time as the others on this street, all of which are similar but not the same – a variation on the theme. Because the garden wraps around three sides of the building – and, like ours, our neighbours’ houses aren’t tall – we’re not at all overlooked. Sitting in the garden in summer, you’d hardly know you were basically in central London.”

Charlotte: “We bought the house from someone who had rescued it from a wreck about four years before we arrived. Until that point, I think there had only been three owners. As a result, there are still remnants of the house’s past, very much present – the basement, for instance. While we created another bedroom down there on one side, which leads on to the garden, the other half still has its original floor and coal hole, while the pantry down there is brilliant – it’s wonderfully cool and dry.”

Christopher: “I like that, with the basement in particular, you can feel the Victorians’ way of life in this house still resonating. When we moved in, we found an ancient safe in the garden, which got me very excited. It was so heavy that nobody could move it and the key didn’t exist. I started dreaming of leather bags fat with shiny treasure! It was magnificent – and full of absolutely nothing when we finally opened it. It still lives in the basement. I love it – it links us back historically and very tangibly to the building’s past.

“Charlotte and I have approached the way this house looks very differently. Charlotte, as her work shows, pays close attention to what she sees; I, on the other hand, make everything up – though I think we make a good team. Our end goal is the same – we’ve always wanted this house to be a place that both of our work sits comfortably in. The choices we’ve made have certainly been informed by that – in the study, for instance, which is full of prints and drawings. We used a warm colour in there, because it makes everything stand out beautifully. The colour in the extension was decided on as the perfect tone for a large painting that hung behind the dining table for many years. It’s just off white, there’s just a bit of give to it.”

Charlotte: “That part of the house is very light. It’s part of the structure that we added in 1998. We’d toyed with the idea of moving out of London at various stages, but it didn’t quite work at the time, so we decided instead to add a new dimension to the house – a space not just to cook and to eat, but just to be.”

Christopher: “This was Jamie Fobert’s first job after leaving David Chipperfield to set up his own practice. From the off he was very clear that he wanted to do some architecture, not just an extension – something that spoke to and came out of the original fabric of the house. It sits on the footprint of the former scullery and an outdoor loo (while the terrace is where the conservatory would have once been). What’s lovely is the way the render that clads it makes its way on to the original back wall of the house.

“Though the building work was finished many years ago, in some ways, Jamie’s vision was only really completed last year. When he designed the space, he put in a long narrow skylight above the wall with the large painting. It works like a picture light – or, rather, in the daytime it works like a picture light! We used to have spotlights attached to the roof outside, but they were clumsy. It was only recently that we found a nice enough LED strip that cast the right colour. Previously the technology wasn’t there – but now Jamie’s idea has finally been fulfilled.

“That’s a lovely example of the house’s organic development– something Jamie was very keen on and good at guiding us through. He noticed the unusual original shutters in the drawing room, for instance, which instead of folding back can be pulled out across the windows like screens. They’re a leitmotif throughout the house, which Jamie continued in the extension. You can do the same across all the glazing in the dining room. He was also responsible for putting the door handles in there at hand height. It’s such a simple idea that makes so much sense. Deeply satisfying!”

Charlotte: “We really wanted to have flagstones in here. We love Somerset, and all the farmhouses there have blue lias underfoot, but we just couldn’t source enough of it. In the end we used flags made using Portuguese limestone. They’re beautiful.”

Christopher: “Completely – they’re not warm, not cool, not dark, not grey. Incidentally, at around the same we installed them, I was on the board of the National Gallery. They were doing a big extension to the east wing and the director came here, saw the floor and liked it so much he used it there. It’s rather a nice link.”

Charlotte: “What I like about ours is that they carry on, out the doors and on to the terrace, so there’s a connection between inside and out. The garden here is so important to me. Any gardening I do is at weekends, but everything – everything ­– I paint comes from out there. Often I paint in there too – I spend a lot of time painting in that garden, in every season. I know the way the sun hits, the way the seasons shift. I can’t quite describe it. I just know it. It will be difficult to leave it. How I’ll work without it is anybody’s guess – but I suppose that’s the challenge.

Christopher: “We want to move somewhere that has space for us to work within reach of the house but not in it. Charlotte’s studio is inside the house, which isn’t perfect, while mine is too far away. Anyone might find it laughable that I think 10 minutes is too far, but when I come home from the studio for supper, by the time I’ve changed and washed and eaten, I never go back to the studio. I do some of my best work at night – and I’m inclined, once I’m home, to say: ‘That’s it,’ and stop work. You may say: ‘Quite reasonably.’ But, as artists, we tend to work as long as the inspiration takes us. “

Charlotte: “I work at night too. It was, with small children, always an important time for me. It remains helpful – but now the children have left home, I’d like a separate space. Time is what I need.”