A Private View: creating a home worthy of worship in a 19th-century Welsh chapel

With Long Bridge Street on the market, owner Charmain Ponnuthurai talks to Inigo about designing a conversion that works with the original fabric – and sanctity – of such a special building 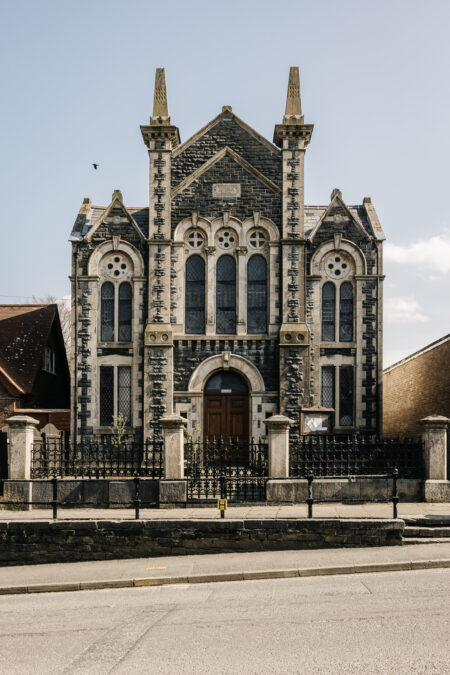 “In Niall’s vision, the chapel almost unfolds, like an enchanting children’s picture book. When I first met him, I did think he had something of the magician about him…” Charmain Ponnuthurai had never worked with an architect – nor had she ever done any large renovation projects – when she met Niall Maxwell. The director of Crane Cookware had enlisted his help to convert her Grade II-listed Methodist church in Llanidloes, a market town in mid-Wales. Niall is the driving force behind Rural Office, an award-winning practice that focuses predominantly on reinterpreting the architectural language of the past into modern designs.

“Having an architect really helped give us an objective view and a clear vision,” Charmain says. “Niall was very interested in working with the space and its history, rather than trying to change it.”

His sensitivity to the chapel, which is currently on the market with Inigo, is evident in his proposal for its renovation, which you can see in the floorplans below. Retaining the vaulted ceilings that rise above the double-height space, the new design repurposes the main chapel into an open-plan kitchen and living area. Even the organ chamber is given a new lease of a life as a bedroom that surveys the living space from what was once the top of the nave.

“I would have been so tempted to divide the space into two different levels,” Charmain says, but Niall’s plans keep the entirety of the chapel open, so it doesn’t lose any of its height or light. “It means you get such beautiful views of the chapel from its different parts,” she continues. “I love the idea of being up in the old organ and looking down on everything. Plus, it’s much less destructive to the building.”

The gallery that runs around the chapel at first-floor height will be converted into an office and a snug, while beneath the gallery, a series of walls are set to envelop the existing columns, creating intimate bedrooms on either side of the building. The schoolroom at the back becomes a large living area for guests – elegantly modern and yet with its original Victorian features. “Niall took a very naturalistic approach to the building,” Charmain explains. “There aren’t any big structural interventions, so nothing about its character has been lost or destroyed.”

The building’s original materials feature heavily in Niall’s plans. The wood paneling from the pews is repurposed on the walls and as the door of the organ-chamber bedroom. Tinted in a grey wash, the old timber is set to be given a thoroughly contemporary look, while still acknowledging the history behind the materials. “The whole design is sustainable in its approach,” Charmain says. “It’s about making the most of the materials that are already here – like all that lovely pitch pine – rather than ripping everything out in favour of something new.”

A sympathetic approach was key for Charmain for another reason. She felt very strongly that any renovation had to also be considerate of the village in which it stands. “The building itself was very special within this community, so we wanted to be respectful to that,” she says. Until about four years ago, the chapel was still functioning. There are people in Llanidloes who attended services regularly, got married or went to funerals here. “The whole village was really interested – and invested – in the project. We wanted to make sure that we were sensitive to that,” she continues.

The building as it stands today was built in 1874, to the Italianate Gothic design of architect Robert Owen. However, an earlier chapel had stood on the same site since 1802. In around 1900, a schoolroom was added on to the back of the building, affirming its place in the heart of this community. That said, despite its location at the centre of the village, the space is remarkably private. “When you’re inside,” Charmain says, “you could really be anywhere in the world. It’s so silent. You really don’t feel like you’re in the middle of a town at all.”

Having recently moved back to London with her two teenage children to launch a new venture, Larder, Charmain has put the chapel on the market. Now, however, it comes fully equipped with Niall’s designs to turn this much-loved building into a home imbued with an air of sanctity. “It’s an incredibly poetic space – romantic, even,” Charmain says dreamily. “And it just has the most beautiful light. I can’t help feeling a deep sense of spirituality when I’m there. It may make me sound like a bit of a hippy, but that’s the truth.”

You heard it here first: Charmain’s new business, Larder, launches later this year. As well as delivering groceries and goodies of exceptional quality to customers at home, there’ll be stories and videos about suppliers, meal-kit boxes and information on local food-based events. Delicious. Keep your eyes peeled on the Larder website for news.