A Place Like No Other: artistry and artifice at the glorious Sambourne House

The Kensington home of Victorian illustrator Linley Sambourne, known for his cartoons in ‘Punch’ magazine, is among the finest examples of Aesthetic interiors still surviving in London. But it’s also a rather canny creation, a self-aware assertion of an up-and-coming artist trying to cement his status. As it prepares to reopen to the public for the first time since 2019, we consider its coruscating complexities 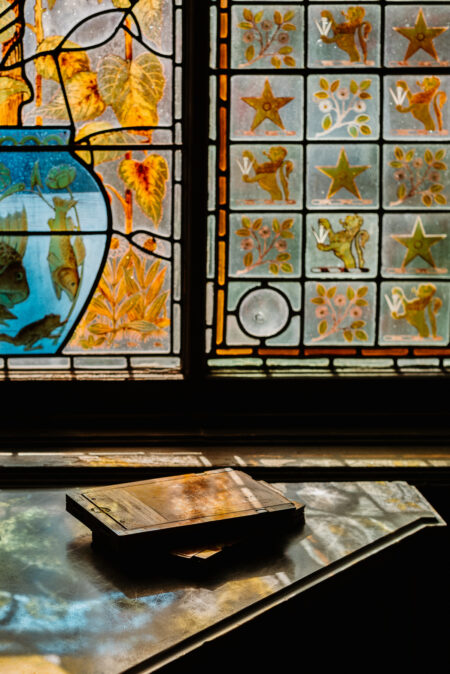 Kensington in 1875 was an exciting place – especially if you were an artist. This freshly developed suburb of west London was something of a destination for the capital’s newly minted middle classes, being only a short stroll from fashionable Hyde Park and only a little further from the South Kensington Museum (later the V&A), whose cavernous exhibition galleries of exotic treasures were the talk of the town.

Those with creative aspirations found themselves in good company: Frederic, Lord Leighton, had in 1866 commissioned George Aitchison to build him a magnificent Orientalist fantasy of a studio home, and just next door the Pre-Raphaelite Val Prinsep asked Phillip Webb to do something for him too; George Watts – widely regarded as the greatest painter of the Victorian age – had, since 1850, been staying as a permanent house guest of Prinsep’s parents at nearby Melbury Road, painting furiously.

For someone like Edward Linley Sambourne, owning a home somewhere like this wasn’t just important, it was imperative. Sambourne, the son of a furrier, had trained as an engineer’s draughtsman and was now an up-and-coming cartoonist and illustrator with ambition – both artistic and financial. In 1875, he had recently married Marion Herapath, the daughter of a stockbroker, and had moved to 18 Stafford Terrace, just north of Kensington High Street.

One of the first things he and Marion did was to spend £300 on Morris & Co wallpapers. Some of these survive today. In fact, nearly everything at 18 Stafford Terrace was in place when Sambourne was living there. Unlike Leighton, whose studio was separate to his living quarters, the illustrator worked in his drawing room, for want of private quarters. He would entertain guests in the huge upstairs space, its walls hung hugger-mugger with gold-framed prints. He may well have continued working at the broad desk at one end of the room, while his callers admired the Chinese porcelain above the picture rail, the small bronzes topping gleaming inlaid furniture.

This was a house for show as much for living, says curator Daniel Robbins, and it is hard to put into words quite how much there is to look at (what you see here is a mere snapshot). “What’s so interesting about it,” he adds, “is the way the decoration balances Sambourne’s determination to be seen as a proper artist, living in this highly considered Aesthetic interior, with his and Marion’s more conventional social aspirations.” Sambourne, seeking upper-crust acceptance, marked the house with heraldry, for instance, incorporating it into stained-glass windows.

Aesthetic with a capital A refers specifically to a 19th-century movement that cherished ‘art for art’s sake’ and rejected the mechanised ugliness of the industrial age. Sambourne’s “instinct” to purchase expensive and fashionable Arts and Crafts papers, Daniel adds, says as much about his consciousness of status as about his Aesthetic intentions. But it is not just what Sambourne decorated his house with that grabs one’s attention, but how he did it. While he was living here, the artist – by now quite famous, having become Punch magazine’s primary cartoonist – was interviewed about its interiors. “His words in the article run along the lines of: ‘Only the very best,’” Daniel recounts. “But in our archive, we’ve got documents that show he was sent the writer’s copy to approve. They tell us that what he really said was: ‘Only the very best, but on a limited budget,’ but he crossed that line out before it was printed.”

For Sambourne and Marion did this house, in his words, “on a shoestring”. Yes, he made the occasional investment, but those other details? His throngs of pictures are invariably reproductions, not originals; much of the porcelain – high on the wall, so as to be less visible – is cracked or chipped, bought cheaply at auction. Sambourne’s ‘leather’ wallpapers, hung in a later renovation, are imitation. And by crowding the walls with frames, Sambourne also only had to buy enough paper to cover the smaller areas that could be seen, often making use of offcuts. “He knew perfectly well that by filling every wall, every corner, with a terrific amount of stuff, the eye would never settle long enough to focus on the finer details.”

Sambourne spent a huge amount of time on the house. Marion’s diaries decry “yet another delivery of chairs”, and her husband was constantly rehanging, wanting to make sure that the right things were on display for the lavish soirées they threw. “There was a lot of good living in this house,” Daniel says. And as well as parties, there were the models. Towards the end of the 19th century, Sambourne – who often struggled with Punch’s punishing deadlines – began drawing his cartoons from photographs for ease, which he would take and develop himself. There are many snaps taken at Stafford Terrace of men in wrestling costumes, bonneted women pretending to be on bicycles, of Sambourne himself, in caricaturable top hats and tweeds.

Despite having felt himself, as a black-and-white artist, “the poor relation” of his famous neighbours, Sambourne was a great success by the time he died in 1910. His children, Maud and Roy, were left this Wunderkammer of a house and – perhaps recognising its future value, perhaps overwhelmed by the embarrassment of riches to deal with – did nothing to it. Roy, a rather lonely figure, called it home until his death in the 1940s, “moving around inside it, rather than living,” before it passed to Maud’s daughter, Anne Messell, mother of Antony Armstrong-Jones, onetime husband of Princess Margaret. In 1957, after noticing her friends’ reactions to this wondrous house, Anne was inspired to found the Victorian Society here, the charity dedicated to protecting and promoting ‘unfashionable’ 19th-century architecture and design.

On exploring its awesome rooms, fashion doesn’t seem to have a place here, but rather the consideration of beauty (even if one’s own tastes might be more demure). Its recent update ­– Sambourne House closed in 2019 – has given the curators a chance to double down on its connection to nearby Leighton House. “Taking their rooms apart and putting them together again has allowed us to see they have more in common than we think,” Daniel explains. Now, visitors will be encouraged to visit both on the same day, to inhabit the world of these 19th-century artists, to move between them and think about their lives, their work and their exploration of the transformative power of decoration.