A Place Like No Other: David Parr House, Cambridge

On an unassuming terraced street in Cambridge is one of the finest examples of Arts and Crafts domestic décor, on a modest scale that William Morris would have been proud of. Inigo marvels at one man’s lifelong dedication to decoration 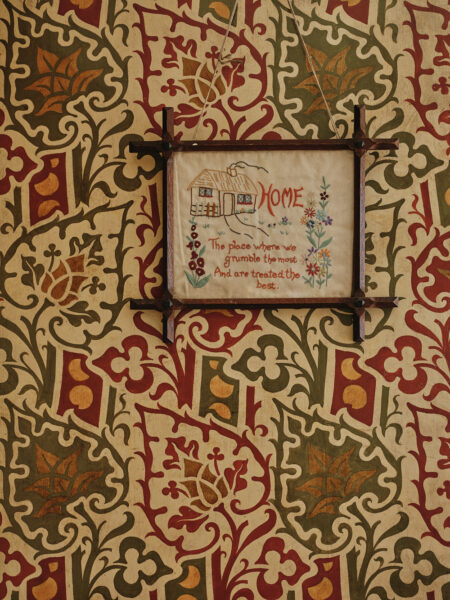 Flowing away from Cambridge’s buzzy Mill Road, Gwydir Street is the kind of quiet residential strip that you’d find in many a British city: a quaint, narrow thoroughfare that’s had trouble adjusting to the age of mass car ownership, flanked by modest Victorian terraced houses. However, as familiar as the street will feel to many, a notable exception hides behind the door of number 186 – immediately distinguished by its strikingly painted sash windows and exuberant palm in the front garden. This is David Parr House, a gem of exquisite rarity that contains some of the finest preserved examples of domestic Arts and Crafts interior decoration in the country.

Built in 1876, this unassuming house was bought 10 years later by a working-class Victorian man named David Parr, a painter for FR Leach & Sons, a Cambridge firm of artist-decorators. Parr learned his many skills there, painting houses and churches with designs devised by some of the best architects and designers in the country, including George Frederick Bodley, William Morris and Charles Eamer Kempe. Meanwhile, at home, the rooms of the house on Gwydir Street became his personal project and canvas, which he enlivened with hand-painted schemes over the four decades he lived there, sometimes using materials he had access to through work. On Parr’s death in 1927, the house passed to his granddaughter, Elsie, who for the 84 years she lived there, cared for his legacy before facilitating the sale of the building in 2014, to a charity set up in David Parr’s name.

“Elsie very much looked after her grandfather’s work and the house. But she was 97 when she died, so when we inherited the house it was quite rundown,” says Charlotte Woodley, artist, art historian and curator of David Parr House. “There was a major problem with damp – not good for intricately painted walls.” After a National Lottery grant and two-and-a-half years’ worth of detailed renovations (helped in great part by the detailed contemporary diaries Parr kept as he decorated the house), today the rooms preserve the artistic flair of the home’s namesake, as well as the subtle fingerprints of Parr’s greatest cheerleader, Elsie.

Take the sash windows: those at the front are painted mustard yellow with red accents, restored to how David himself coloured them at the turn of the 20th century. At the rear, however, they are painted white with green accents, a fashionable mid-century change made by Elsie. Inside, this mélange of tastes is most noticeable in the dining room on the ground floor. Nestled in between the drawing room facing the street and the kitchen facing the garden, the room bears the artistic hallmarks of its two main residents.

“Parr did the dining room in the same style as the Bodley and Pugin designs that FR Leach & Sons was producing for churches and Cambridge colleges,” Woodley says, pointing to the main work on the walls: a colour-popping repeat pattern of red and green leaf outlines with intricate yellow-dotted vines running behind. Underneath the jolly ecclesiastic architrave, a floral frieze sprawls around the top of the room, darkened and mellowed by time and varnish. We know from his notebooks that this frieze alone took Parr 85 hours to complete. Above the fireplace, meanwhile, is some wallpaper whose difference is hard to ignore: two-and-a-half panels of a graphic design installed by Elsie in the 1950s, presumably to cover a patch of damp. “It’s quite the juxtaposition,” says Woodley, “but I think the colours actually go very well with the room.”

The drawing room, however, is what Woodley calls “the jewel in the crown”. This is where David started his artistic endeavour, working first on the recesses by the fireplace, then moving on to the ceiling, then the mouldings and finally on to the walls – a process that started in 1894 and didn’t cease until about 1912. It is an explosion of high Arts and Crafts style adapted for a humbly sized space – shades of green and yellow, with rich, churchy-red accents and gold leaf aplenty.

“We know the pattern on the wall above the dado rail is an adaptation of another William Morris artist, John Henry Dearle, that’s been squashed and pushed down to fit the space,” says Woodley. Scale was not the only thing Parr had to consider when adapting the techniques he used on grander projects for this domestic space; lighting was important too. Even though gas was becoming the primary way to illuminate houses across the country in the early 1900s, Parr refused to install it, preferring the glow of candles instead. “You’ll notice that there’s a very thin golden glaze applied to the paintwork above the dado rail,” says Woodley. “This would have glinted and glimmered in the low light.”

More than 125 years after David Parr painted those first brushstrokes on the walls of 186 Gwydir Street, his work still inspires awe: overwhelming, breathtaking, even comforting in its enveloping nature. But perhaps most importantly, inspiring. Parr’s son, David Douglas, who grew up here, later followed his father into his trade. In fact, you can see what Woodley suspects is some of the younger David’s handiwork in the master bedroom, where the dining room’s leaf-and-vine motif makes another appearance. This time a trellis has been inserted into the design, possibly a small nod to the changing tastes of the Edwardian era.

Perhaps the most striking aspect of the David Parr House is that it’s such an anomaly. Parr spent his days decorating auspicious, large-scale spaces like churches, universities and grand country homes for the wealthy. But that wasn’t the intention of many of the designers behind the Arts and Craft movement, most notably the outspoken William Morris, a socialist who wanted his designs to bring beauty and natural forms into the homes of an increasingly urban and industrialised working class. While today we might associate these sorts of intricate patterns, ancient scrollwork and botanical flourishes with those more grandiose spaces, the David Parr House is proof that even the most daring of interior design schemes can be translated into the domestic realm. In its simplest form, it stands as a manifestation of Morris’ aims. It’s also the ultimate expression that your house can be your biography. You just have to be bold enough to be yourself.

David Parr House is open for tours every Thursday and Saturday. Visit its website for details.