Shortly after giving birth for the first time, Freyja Lee was encouraged by her mother-in-law to take up ceramic painting. Working in tandem with potter Tilly Young, she has perfected her singular style, adorning vessels with folklorish themes and fantastical figures in flowing lines and gleaming gold. Inigo marvels at her dancing deities and beautiful, brutish beasts 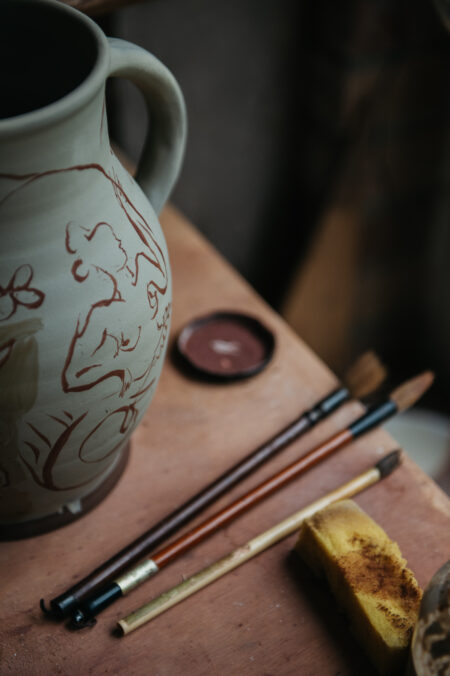 Freyja Lee is charmingly, genuinely modest when it comes to her work. “I’m terrible at talking about it!” she cries, face in hands. But, when she gets on to the topic of poetry, the words come, rapturous and lyrical. “It’s such a big thing for me,” she says, as she jumps nimbly from Mary Oliver to Sappho. She mentions one poem in particular by the ancient Greek: “Her words transported me in an instant. I read them and suddenly I was there – on the dark earth at the feet of the goddesses that she wrote about.”

Dark earth and goddesses seem a good place to start when it comes to Freyja’s work. Her creations feature both in abundance. Using largely slip – a creamy mixture of clay and water mixed, in Freyja’s case, with cobalt and black pigments – and a lustrous glaze made of real gold, she conjures creatures and characters in the mythic mould, painting and drawing them on to teapots, tiles, dishes and jugs. All her ‘canvases’ are handmade by an aunt of Freyja’s husband, a potter by the name of Tilly Young. Tilly, who spent six formative months training in Japan, has been making ceramics for three decades. She now runs Washfield Pottery in northern Devon, which Freyja visits as often as she can (she also juggles life as a mother of two small children).

In fact, it was having children that first got her going with all this – and the maternal spirit takes shape in her figures’ swollen bellies and wide hips, her feverish feminine deities. Four years ago, not long after Freyja first gave birth, her husband, a wagon maker and restorer called Rollo Dunford Wood, was undergoing chemotherapy. His mother – “she’s incredibly intuitive” – recognised that Freyja needed a break. She suggested she come and paint some of Tilly’s pottery.

Freyja, who trained at art school, “already had a lovely free hand”, Tilly says, she just needed bit of encouragement. “I could hardly teach her about figurative painting; that’s not my thing at all,” she continues. “But I do know about slip.” Made in tandem, the resulting pieces – as much art as they are craft – are a reflection of two minds intertwined, conceived by Freyja, they’re formed by Tilly and return again to Freyja to be finished. It is, Freyja says, a great privilege to work so closely with another maker – and to be the recipient of Tilly’s wealth of knowledge. “I find her vessels just so beautiful and ancient-looking.”

There’s something symbolic about this cyclical mode of collaborative creation that suits the narratives that gallop around their curves and edges. Does Freyja like telling stories? “Oh yes!” she replies. “I just don’t do it with words.” Contrary to what she says, however, Freyja is brilliant at talking about her work, as Inigo discovered while listening in on a conversation between her and Tilly…

Tilly: “I’ve been making pottery since my 20s. At art school, it was the only thing that made sense to me. I made flowerpots for a short stint, but I’ve been focusing on slipware for 30 years. It’s such an ancient form of pottery – humans have been making it for thousands of years – and there’s so much variety in the decoration.”

Freyja: “I often draw into the slip, using a technique called sgraffito. I’ve always drawn and painted, as I went to a Steiner school, which placed heavy emphasis on the arts. Both my parents are artists, so there was never a question of what I would do, it was more how I would do it. Until I started working with Tilly, I hadn’t quite found my creative feet.

“Not long after I gave birth, Rollo’s mother told me she was taking me down to Devon to paint. She would hold my son and I could work. Tilly had made me five vessels. After that, I was hooked.

“As I began producing more pottery, I started making fewer drawings. I had always found the flat surface of paper quite intimidating; there was nothing to work with. What I like about 3D vessels is that they’re made up of canvases that shift as you move the object in your hands. With a teapot, for instance, you’ve not only got the lid and the base and the spout, but you have a curving tableau for stories to play out on.

Tilly: “When you first came here, you already had a great sense of line – it was a sound grounding from all your painting and drawing. Now you’ve learned to express it on a different surface and with different tools.”

Freyja: “Yes – that’s been interesting. Something I’ve learned from you is how wonderful it is to make things that aren’t just beautiful but are useful too. You do that brilliantly, Tilly. In fact, I find it quite hard to say I’m an artist, because what I really want to do is to merge the functional with the decorative.

Tilly: “We live in a world of mass-production, where stories and objects are separated. But in the past, storytelling was part of making and vice versa. Humans historically used jugs and drank out of cups that told stories on their surfaces – either figuratively or in the thumbprints left by the person that made them. I’m noticing more than ever, with the increased interest in craftsmanship, how hungry people are for these story-shaped things.”

Freyja: “My work is definitely driven by narrative – but I don’t plan it. Often, my imagination will be sparked by one line in a poem that evokes some kind of imagery. I’m also enormously inspired by folk art and Medieval paintings and tapestries, as well as Roman mosaics – anything imbued with a sense of myth, legend or mysticism, which I can then transform to create my own modern myths.”

Tilly: “There’s a nice link with slipware there, as the ancients used it a lot. The Greeks’ pots – those recognisable orange-and-black ones – were designed to tell stories.”

Freyja: “Exactly. And just as they had recognisable motifs, so I find myself returning time and again to the same imagery. Mystical mermaids with wild hair swim to the surface. Swans and birds in flight appear a lot, as do beasts eating other beasts, lions devouring deer, for instance; I think that came from an old prayer rug Rollo once found on the street. I like the primal power of animals in movement and I love trying to describe those split seconds as they leap, pounce or pause; they’re moments, scarcely definable. In a sense, I think that’s what poets try to do, only they use words to make the intangible tangible.

“I’ve been doing quite a lot of experimenting with wax-resist processes lately. It reminds me a lot of print-making – and has allowed me to explore the same imagery in refreshing ways. Instead of painting on a coloured glaze or slip – which is positive mark-making – you have to think in terms of negative space, and paint liquid wax where you want no colour. Then you cover the whole thing in glaze, against which the wax acts as a slip. It burns off when it’s fired.

“In lots of ways, that method denies me some control over the finished piece; I have less sense of what it will look like when it comes out the kiln – and I really like that. Giving myself over to the process makes me feel free; I think I’m often searching for that kind of liberation in my work.”

Tilly: “You’ve chosen the right medium, then! Making pots is so nerve-wracking – you spend all this time making something whose appearance you’re unsure of and which might break when it comes out.

“Wax-resist suits your work beautifully. I have never done much myself, because decoration isn’t my think. But with you, Freyja, it’s just perfect. Because you’re taking away rather than adding, it gives replaces defining lines with soft-edges – it’s like you’re seeing through water. It really suits your dreamlike visual language.”

Freyja: “I love the way we work together. There’s something so wonderful about making in the same space as someone and not necessarily talking about it. That said, your input is invaluable to me – but you’ll only give it to me if I ask. There’s a lot of space for me to learn and make mistakes. And that’s invaluable – that’s the lack of control I like.”

Freyja Lee sells through Tilly’s Washfield Pottery and through Partnership Editions. Her next drop will be released 21 September