In its north London workshops, the design firm founded by Chris and Nicola Cox uses little more than fire and metal to craft exquisite pieces of furniture and lighting inspired by antiquity and the natural world. Their golden secret? Boundless imagination and a human touch 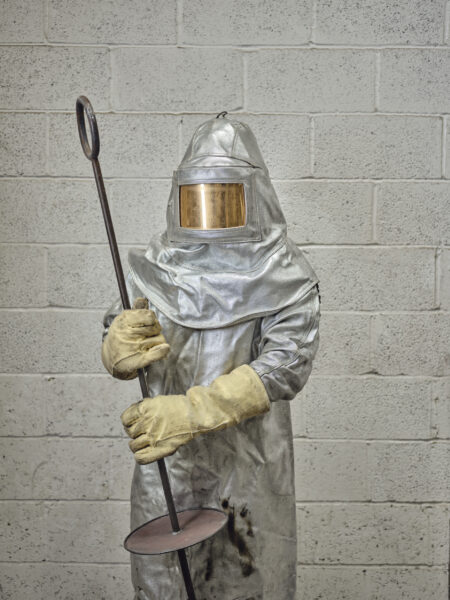 Chris Cox is whizzing around an industrial estate in Tottenham on a golf buggy, enthusing on the types of decorative techniques popular in the 1980s. “They really deserve a comeback,” he says, telling of a tabletop he recently turned to tortoiseshell and which now sits in the sleek new Cox London showroom on Pimlico Road. It’s red, black and distinctly retro.

Such an artistic approach to design is perhaps the defining feature of the bespoke furniture and lighting company he and his Kiwi wife, Nicola, founded in 2005. “We come at things as sculptors, rather than designers,” Nicola says. It’s intuitive, she adds. Given that they trained in 3D media at art school, where they met, perhaps that’s unsurprising. “When we were first living together, whenever we wanted something, we made it for ourselves in the way that we liked it,” she explains. Chris jumps in: “And once you realise you can make a faithful copy of a palatial Baltic chandelier, for instance, it gets you excited about other possibilities. Not that we kept that particular piece… It was a bit grand for us.”

That 20th-century take on an 18th-century design illustrates the interplay between past and present apparent in every Cox London creation. You’ll find it in the ophidian squiggle of its ‘Serpent’ table, with its whiff of antiquity, as well as in the angles of the modernist ‘Ferro Vitro’ designs, simultaneously slight and solid, Giacometti-esque. It’s reflected in Cox’s use of marble, brass, bronze and glass too. These are materials for the ages.

And everything – save for any glass – is made or finished by hand on-site in that industrial estate in north London. Where once they had just one workshop, Chris and Nicola have now expanded slowly into five units across the plot (hence the buggy). Employing 52 people across the whole company, they work in a manner reminiscent of the ateliers of the Renaissance (only with more safety goggles).

The unassuming site incorporates a fully-fledged foundry, where the chink of metal on metal often drowns in the roar of fire. It is a cacophony of creativity. As well as the forge, there’s a moulding room, a design studio, a space for lost-wax processes and a patina workshop producing perfect verdigris, and much more besides. Every piece is based on designs drawn by Chris and Nicola in their small mezzanine study, surrounded by found objects – a leaf that one day might be cast in filigree; a piece of seaweed waiting to be embroidered on to a chair seat.

During Inigo’s conversation with the couple, it became clear that Chris and Nicola are the types that ask not if they can, but how. Such curiosity and creativity is nothing short of wonderful.

Chris: “I come from a family of antique dealers, so decorative finishes and historic design loomed large growing up. As a consequence, I feel very inspired by the exquisite craftsmanship of the past. But when Nicola and I managed to get some money together to buy a house, there was no way we could have afforded anything like that to fill it with. So, as sculptors, we made it.”

Nicola: “Fundamentally, we like to apply sculptural techniques and processes to functional pieces. It’s not what we were taught at art school – my final project was the exact opposite: a cloak made from needles! – but it comes naturally to us both. It’s also something that’s reflected in the people that work for Cox London; some, like us, come from art backgrounds, while others come from traditional workshops – smiths and foundries, for instance.”

Chris: “We don’t approach things as designers, which I think changes the way we make here. Traditional designers use a defined set of rules to make things in a certain way. We don’t work out whether something is possible before we start – we just try to make it happen.”

Nicola: “It reminds me of when I was a child and would lie with my head hanging over the edge of my bed, so I could see the world in a new way. I really feel that our way of working encourages curiosity and play.

“Our embroidery came about as a result of that. I had collected some gorgeous pieces of seaweed I’d found on the Jurassic Coast, near our house in Dorset. I tried to almost draw it, using thread in many colours. Someone else at Cox is very good at needlework too – one of the joys of working with so many creative people – so we now do it together. We’ve used the embroidery on the seats of our ‘Voyager’ chairs, a pair of which have just gone to Chatsworth.”

Chris: “Wonderful things happen here as a result of experimentation. We made a spectacular console table out of a huge piece of rich and heavily grained burr wood. It was beautiful in itself – but then we decided to cast it. When it was white it became a totally different beast. Now I want to see what it will look like in bronze. With pieces like that, not only is their difference exciting to us, but so is the fact that they will attract different people and inhabit different homes. That really spurs us on.”

Nicola: “I love seeing our pieces in new contexts, discovering how people live with the things we’ve dreamed up.”

Chris: “We’re so lucky that we have such a brilliant team behind us. As a young sculptor, I never could have dreamed of having different departments for fabrication, design, mould-making… All with their individual skillsets and reference points.”

Nicola: “No! And while I’m very used to working with bronze, for instance, it’s a real privilege to have some serious experts on our side too. It means we can use all sorts of materials, some of which are really quite ancient. Maintaining that link with history is important to us. We want to create objects with longevity. Not only is it more traditional, it’s also more sustainable.”

Chris: “There’s definitely an air of reverence towards materials in our workshops. Everything we do celebrates the thing it’s made of – but sometimes we play with it in the process, which is where patina comes in. While of course giving something a manmade patina is a bit contrived, all of ours are living. They’re produced using organic processes and compounds, so they’ll develop and continue to change forever.”

Nicola: “Our pieces age very gracefully, which is in part down to the care and attention given at every stage. We make everything to order, so we only really show what we have in stock, as it were. It means everything can be customised. It’s a great way of working, full of variation. I reckon we probably have about 100 things on the go at any one time. And often Chris and I will be making too. We’re not just managing people; we’d rather be getting our hands dirty.”

Chris: “I hesitate to say that things happen slowly here. They just take time – as long as something of their quality should. It’s so important to us that everything we make has a human element to it. I love the tiny imperfections that results in – the element of randomness that can’t be replicated, which is what makes things truly special. It reminds me of the purposeful mistakes that are included in Islamic art, so as not to rival God. And yet those imperfections are what make those pieces perfect. I love that.”