A Home with a History: the shifting tides of Pearl Lowe’s style in her Sussex beach house

Having bought a beach house in East Sussex, the designer had to embrace a new look – and face her aversion to white walls. The results have left her happy as a clam. As she releases a new book on coastal homes, Pearl talks to us about her sea change 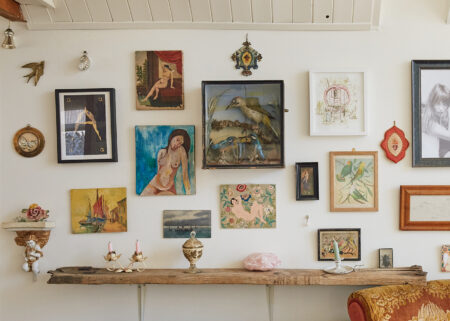 White walls aren’t usually Pearl Lowe’s style. Describing her look as “rock ’n’ roll romantic”, the designer and former singer is a lover of bold patterns, jewel-toned velvets and blooming florals. And yet, there are rather a few of them in her beautiful new “beach shack”, as she calls it, in near Hastings, East Sussex. Cool and light, painted in Farrow & Ball’s ‘Pointing’, its spaces have become canvases on which Pearl can express herself, where her playfulness is proclaimed by dazzling disco balls, her femininity in the softness of lace curtains.

Close enough to feel the salt kiss of the waves, Pearl’s seaside cabin is the perfect getaway. “It wasn’t always like this,” she laughs. When they first moved in, Pearl and her husband, Supergrass drummer Danny Goffey, found themselves sleeping on the floor. It was the dead of winter and, with no heating, they couldn’t help but wonder if they’d bought the place in haste.

Yet now, a year on, it’s hard to imagine the cabin being anything other than warm and welcome. As the floral dresses, vampish vintage home accessories and fabric designs she sells under her eponymous label attest, Pearl has always had a distinctive vision, one awash in glamour. But the coast looms large in her imagination too, as her soon-to-be-published Faded Glamour by the Sea, proves.

The book, which comes out on 12 April, is Pearl’s second and gives glimpse of her inspirations, taking readers on a tour of her favourite seaside homes. Among them is her own, a place that Pearl says forced her to step out of her comfort zone. Showing us round, she talked about learning to embrace a new look – think fresh linens and yes, cream walls. They say that, sometimes, a change is as good as a rest. It seems here she’s found both.

“It’s strange to think we’ve only been here a year. We bought it in February 2021 and spent 12 months renovating. There had been two families living here before us. It was very colourful and full of things. Of course, when they left they took out all their beautiful drapes and rugs and we were left with a shell to work. It was so empty. We had to work really hard to bring it to life! Not least on a practical level; before we did anything we had to put in new bathrooms – we used Burlington – as well as proper heating and plumbing systems.

“The house dates to the 1940s. It was built by a man for his artist wife, when he came back from the war. It’s such a romantic story. You can see little memories of her everywhere, which I love – her shell installations are still dotted around inside and in the garden.

“This house was a canvas for me. Every place I do up is an extension of myself. I am obsessed with florals and more feminine materials like lace, but I do realise that I live with men – I have two sons, as well as two daughters – so I have to compromise. If I had it my own way, I would have a pink house and lace everywhere. I still do get away with a bit, because my boys understand that it’s part of my life – and my business. I have, however, managed to add a feminine touch here and there – the kitchen has pink marble counters, which are so fun.

“I have really gone out of my comfort zone here. I’ve used a much lighter palette, with cream walls and linens everywhere, from tablecloths to curtains. It’s something I’ve never done before! I’m used to heavier fabrics, like the velvets and tweeds I have in my Somerset house. This place is beachy and light. I particularly love my Graham & Green sofas, which are covered in linen. When I went into the shop, I sat on them, sank into them and knew I had to get them – plus the covers are easy to wash, which is great when you’re by the beach. With linen on my mind, I then designed a tablecloth with Merchant & Mills. It was fun to push my boundaries; it made me realise that I’ve been stuck in a bit of a rut with my design. With my future projects, I want to go even further.

“My mum is an interior designer, and love of beautiful things runs in my blood. When I was younger, I bought a house in Camden, where I experimented with a lot of different tastes and influences there. Of course, I did some terrible things, but I was able to go over and correct them quite quickly. Friends started asking me to do their houses too, so I’ve had lots of practice over the years.

“Now, I’ve got my own website and sell textiles and antiques and I buy furniture for people too, but I’m more focused on objects than interior design. I’m obsessed with antiques. I’ve always loved history and objects with stories to tell. Whenever I visit somewhere new, I’ll head straight to the nearest antique market or shop – and I’m always travelling the world through eBay and Etsy. I’m constantly on the lookout.

“There’s such a contrast between this house and our home in Somerset, which is Georgian, with high ceilings. This place, however, used to be a bungalow – though the previous owners added an extra floor and lifted the ceiling. There is still a similar thread that runs through both, though, but in Somerset we have a lot of patterns, prints and textures to create a cosy feel, whereas here, because the house is wooden and by the beach, we wanted to keep it fresh. We removed a large stove from the kitchen to make it open-plan and, instead, we put a nice big table that the whole family can gather around. We spend most of our time in the kitchen here, even though I don’t really like to cook. My husband is an amazing chef, so I get the bad jobs – the chopping and the cleaning up.”

“We spent Christmas and New Year here. At one point, there were 18 of us here, crammed into six bedrooms – four in the main house, two in the garden cabin we have. It was so loud and fun. On Christmas Day, everyone went for a dip in the sea. Personally, I like to save swimming for warmer days…

“I love this spot. We’re near both Hastings, which is fun for the kids and has amazing vintage shops, and Rye, which is great too. It has an incredible shop called Rae, which has the most scrumptious things. There are lots of antique shops too. We are very lucky here. The walks on the beach are incredible, the paths are quite untrodden and it’s all so beautiful.”

Faded Glamour by the Sea, by Pearl Lowe, is published by Cico Books and will be available on 12 April