A Home with a History: fun and frolics meet rural relics in a former farm cottage in the Cotswolds

“Houses are for enjoying,” says James Mackie, who has transformed a rundown cottage in the Cotswolds into a welcoming country retreat. Here, friends, favoured things and reminders of the home's pastoral past make for a very happy mix indeed 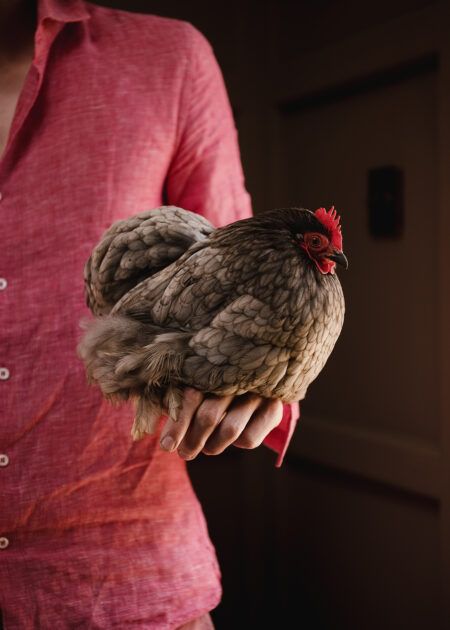 As head of the Impressionist and Modern art department at Sotheby’s in London, James Mackie used to spend his time whizzing around the globe looking at – and then auctioning – some of the most important paintings in the world. He’s been honing his eye for years; he trained as a print specialist and now has his own collection of British prints, spanning Hogarth to Hockney, that he’s been building over the years, buying something special once a year when he can. His advice when it comes to collecting? “Invest in what you love. It sounds cliché but it’s true.” That mantra stood him in good stead when he decided to leave Sotheby’s in 2020 and embark on his second career. James now works as an interior decorator and art advisor (as J. James Mackie) and dabbles in a bit of dealing too.

Fewer hours spent on planes has meant he’s had time to play with the interiors of his own house, the 17th-century Cotswolds cottage he shares with his partner, gardener Arthur Parkinson. And play he has. Fun is important to this man, who believes there’s nothing better than cramming friends into the kitchen. That’s why this house is so particularly welcoming, its “jewel-box” rooms filled with exquisite objects and pictures, all in conversation with each other. That said, the house’s story as a farm labourer’s cottage is important to James too, who is quick to point out its more rustic eccentricities. This is a decorator keen on references, from vernacular quirks to local history, which he uses to build a “frame” for his decorating. “Then you can play with it,” as he explains here.

“I found this place thanks to a friend, who has a house about two miles away. I’d just turned 40 and was hankering for the countryside. I’d lived in London for 20 years but, having grown up in Devon, it’s part of my DNA. It felt really important to get back to it. I remember being in New York for one of the major spring auctions, feeling jet-lagged, and on a whim, I thought I’d have a look on Rightmove. I put in my friend’s village and this popped up. I landed back in the UK on a Friday, saw the house on Saturday and put in an offer on Monday. By the end of the week, it was done.

“I think it’s a house that embraces you. It has a really good atmosphere, which was something I felt from the off. Decoratively, it was liveable, but it was in a dingy and rather sad state. I found that exciting – it had enormous potential. I was looking for somewhere I could transform, so it was perfect in that sense. I wanted to create a place for weekends. In fact, more than anything, I think I needed it. I was running the Impressionist and Modern art department at Sotheby’s in London at the time, which was pretty stressful. I was on a plane twice a week. This felt like a place I could rest and have it put its arms around me.

“Originally, it would have been a one-up one-down hovel. It’s hard to precisely date houses like these, but the sitting room and bedroom above are probably 1650ish. Then, by degrees, it’s been added to. A side section was put in at some point, which was done beautifully with these lovely curved walls, and in the 1980s, the owners brought in an outbuilding, which is where the kitchen table is now, and built a bedroom above it – layers and layers on this antiquated core.

“I’ve always loved ancient houses, so when buying, it was always going to be something with history, however modest. That said, it would have been pretty horrific living here in the 17th century. When we did the building work, I got a slight sense of what it might have been like as a farm labourer living in a cottage like this. We had to take the heating system out to put a new one in and we had no warmth in November and December. The bedroom had damp running down the walls. It wouldn’t have been as pretty as it is now!

“There are a few details in here that are quite typical of Cotswolds cottages. We think the hooks on the beam may have been used to hang meat, but the village historian says they may have been used for linen panels, just to divide the space to give a bit of privacy. There’s a hollow in the stone floor too, which was likely where the stump was kept for chopping wood. This house was historically lived in by farm workers, right up to the end of World War II. Apparently, the lord of the manor offered it to another tenant for £50, which indicates what kind of state it must have been in.

“Decorating was quite a slow process. I only used it at weekends for about three years, but it’s always been evolving. The spaces themselves did need a great deal of work, but it was important to know how to approach them. They’re small, so working out how to use all of the space was important. Every square inch needed to have some point of interest. The idea was to create a series of jewel-box rooms, taking as their reference the age of the building and the local vernacular architecture.

“What’s brilliant about this part of the world is that it’s rich in Arts and Crafts history – Kelmscott is a couple of miles away, Gimson had his school here – so that felt like a natural starting point. But I think you mustn’t be too strict with interiors – once you’ve got a framework, then you can play with it, always having your anchor. That way, it’s fun. That’s why there’s such a mélange here. There’s lots of antique furniture – which I’m dealing in a bit now – some of which I bought when I was 16.

“I’m so glad I added the extension at the back. It makes it so much more flexible and now downstairs works so well. It’s lovely having people here. Four is a dream, but you can squish 10 in here. I think it’s really important that a house deep in the countryside has a sense of fun. Houses are for enjoyment. That’s why I put installed a bar here. I’ve always loved how, in my American friends’ houses, the bar is part of the designed space.

“It’s really come together in the last year. At the beginning, it was just a great lock-up-and-leave; it’s the perfect weekend house in scale, which was why I just did just enough to make it a nice place to be and have friends to stay. But then, just before the beginning of the pandemic, we did a big refurb. We moved out for nine months. That’s when everything came together – soft furnishings, paint colours, wallpaper, finishes. Bits have augmented since, though, and I keep moving things around. I’m sure I always will.”