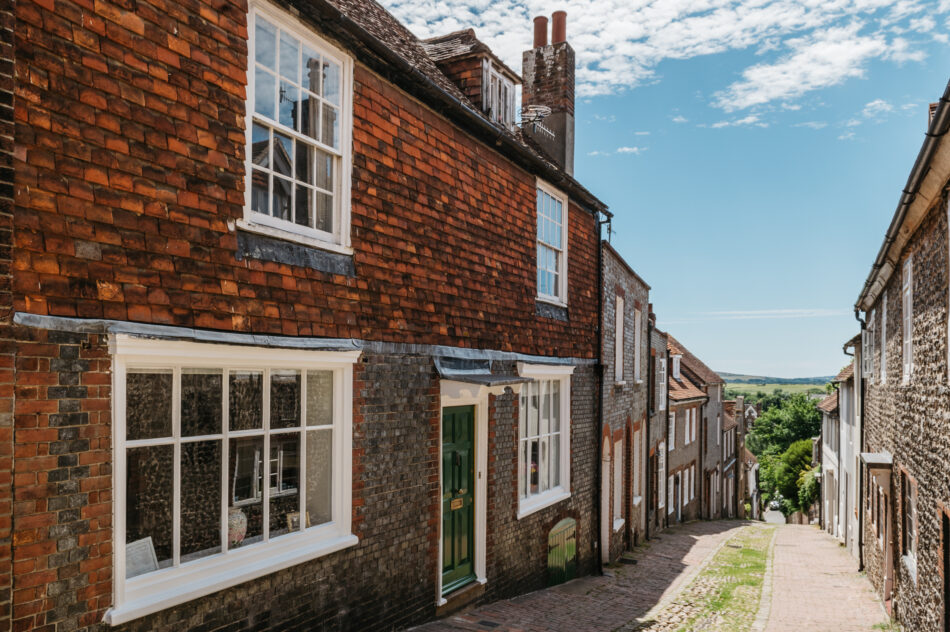 This handsome Grade II-listed five-bedroom house is positioned in the heart of the beautiful and historic market town of Lewes, East Sussex. Extending 2,100 sq ft internally, it unfolds across three levels, in addition to a spacious cellar. Throughout history, the building has had many iterations, from a bucket maker’s studio to a bakery. Countless original details have been carefully preserved, including an alcove for the 18th-century bread oven and 15th-century beams, which are complemented beautifully by a calming chalky colour palette. Located on a hidden cobbled hillside street with no-through traffic, the house has views from its tiered garden of the old medieval town wall.

Built on copyhold land just outside the town walls, the house is composed around its original medieval box-frame structure, comprised of English oak crown posts and tie beams. These notched and weathered posts and beams are likely to be old ship timbers (Lewes has a history steeped in shipbuilding), inset with wattle and daub panels, formed using hazel wattle rods and horsehair lime plaster mix. In the 18th-century, the timber frame panels on the first-floor façade were covered with vertical tile-hung cladding, providing further weathering protection. The ground floor façade was clad in brickwork and pointed black-glazed mathematical tiles at the corners of the building. For more information, please see the History section.

The charming double-fronted house is approached from the medieval cobbled street with views of the South Downs in the distance. The façade is composed of hung tiles and brickwork, accented by two large eight-light windows on the ground floor, originally installed to display wares.

The green front door opens immediately into a light-filled main living room. This is a beautifully open and airy space, with exposed 15th-century beams and an alcove where an 18th-century bread oven used to be. A built-in cabinet, also 18th-century, has arched glazed doors and fluted cornicing and forms a charming centrepiece in the room. Running throughout the house are lime plaster walls and original beams, washed in the soft, neutral shades of Earthborn natural clay paint.

The dining room and kitchen are at the rear of the plan. In the dining room, the original fireplace houses an electric wood-burner. It is accented on one side by built-in period cabinetry, and a large south-facing window draws in swathes of natural light. The kitchen beyond is utterly peaceful, with a view of the South Downs from a window above the kitchen sink. A door from the kitchen leads directly into the tiered garden.

A staircase ascends to the first floor, with three bedrooms and an additional bathroom. The main bedroom is en suite bedroom and is painted in a creamy natural tone. It has big south-facing sash window with breathtaking views over Southover Grange Gardens, Lewes Priory and the dramatic Firle Beacons in the distance. Views of the back garden can be enjoyed from the bath in the en suite.

At the front of the plan are two good-sized bedrooms, both flooded with natural light from large sash windows and each with extensive built-in storage. In the garret, at the apex of the house, there are two more bedrooms with dormer windows and blackened exposed beams, which accent the spaces. There is also useful storage tucked into the eaves on this floor.

On the ground floor, a door leads from the dining room to a cellar. Currently used for storage, the large space has the original coal window in place in the façade which could be reopened if desired.

Doors open from the kitchen to the tiered garden, which is wonderfully positioned to catch the sun throughout the day. Each different level has been carefully planted with a selection of mature shrubs, trees and rambling vines. An olive tree thrives in a sunny corner thanks to the protected position of the garden. There is a large apple tree against the end wall and a jasmine, clematis and honeysuckle cover the canopy. Flint walls surround the garden, and the old town wall of Lewes is positioned at the rear. The garden backs onto Thomas Paine’s Bull House, now The Sussex Archaeological Society, and Westgate Chapel, which dates from 1687.

Lewes has a history dating to pre-Saxon times, being a critical strategic point thanks to its position on the slopes on either side of the Ouse Valley. A Roman settlement is believed to have been positioned on the site, followed by Anglo-Saxon and Anglo-Norman settlements, until around the 6th-century when the town was founded.

Lewes is known for its Bonfire Night, which it hosts annually on November 5th. It is a spectacle like no other, with a large costumed parade comprised of various bonfire societies that wind their way through the town to their separate bonfires.

The origins of the house are 15th-century but by 1539, during the dissolution of the monasteries, it became much more the house we see now. Legend has it that stones taken from the ruins of Lewes Monastery after the dissolution were used to build the structure of the building.

It has enjoyed a rich and varied history, having been home to a ‘husbandman’ and a bucket maker in its early days. A ceiling hook in the living room stands testament to its life as a butcher’s shop sometime in the 17th or 18th-centuries.

It became a bakery in the late 18th-century until the final owner, Harry Pinyoun, still remembered in the town, closed the shop in 1946. The chimney alcove for the bread oven is still in place.